Charge Your Phone As You Dance

So far, we’ve been successful (somewhat) in fixing the problem of service at festivals, or lack thereof. The next major issue is battery life.

I know so many people who would be happy with hardware providers creating a phone with a longer-lasting batter than a few extra DPI on the screen or an integrated “touch-to-sync” capability. We all use our phones so much in this age of technology that for many, we need to have chargers at work as well as home to stay connected throughout the day. This is neither the time nor place to discuss the issues with needing to stay connected, but it’s true – millenials are on their phone, or connected, so much that we either have two chargers or two batteries. (Personally, I have two batteries, and even that’s not enough sometimes.)

Thankfully, there are a lot of people out there working to find ways around the shortcomings of the stock batteries that companies like Samsung, HTC or Motorola stick us with. (iPhones are rather irrelevant since you cannot swap out the battery without tools.) One such group of people are the developers over at Ampy, a small company that received its funding from donors on Kickstarter, who have developed a solution. The Ampy device uses kinetic energy from your movements, sort of like how you shake an emergency flashlight to create power, to charge its internal batteries. Then, using your USB charger from your iPhone, Android or wearable device, just plug in and charge away.

Different accessories will allow you to optimize your charge based on the way you move, and you can even just slide it into your pocket while you jump at a show.

There’s a lot of great features about Ampy, but at the moment, it’s still technically in the beta testing phase. You can learn more about the device by watching the video below, visiting their website, or donating to their Kickstarter. 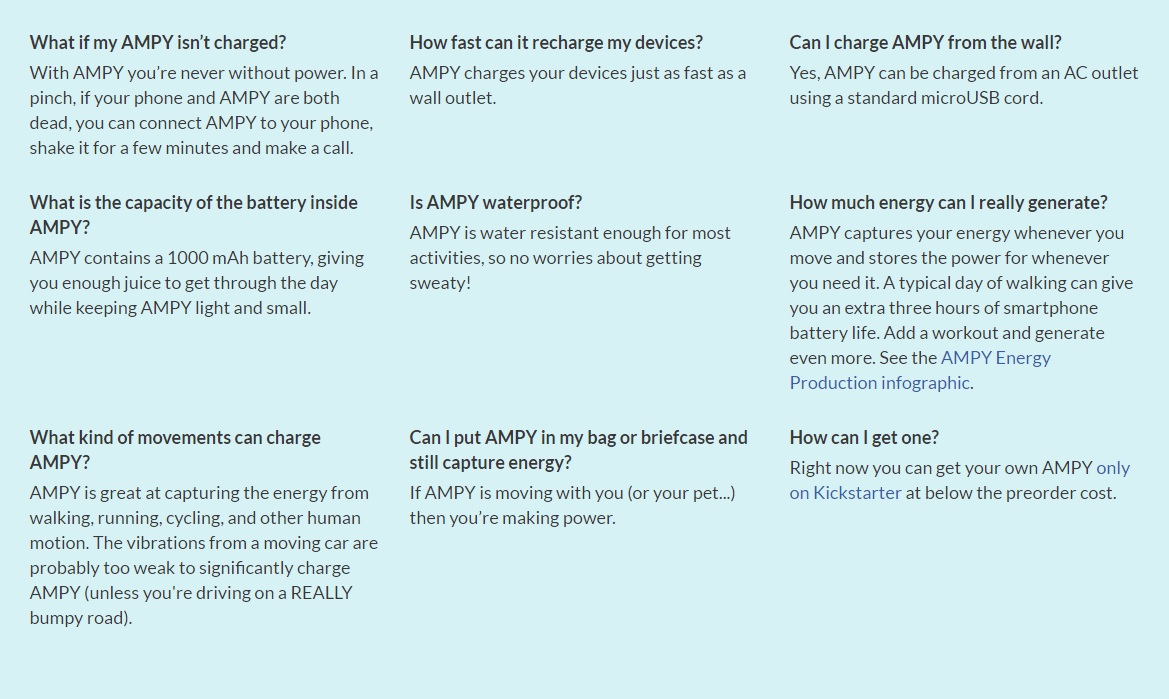