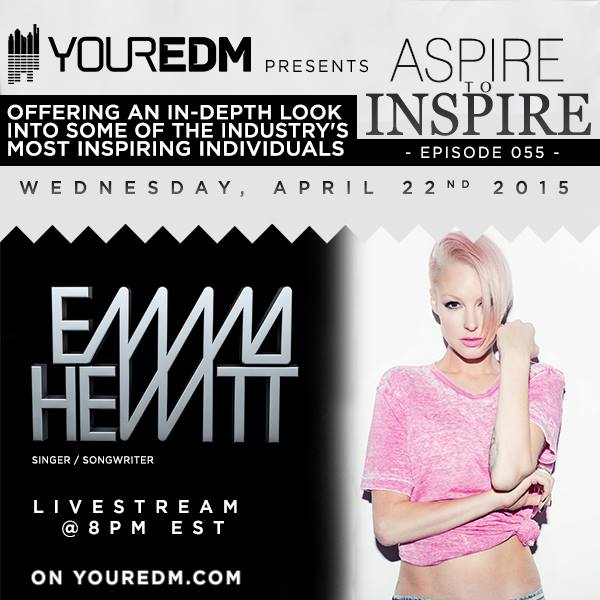 You most likely know her voice from several world-renowned and chart-topping collaborations with Cosmic Gate (“Be Your Sound” for instance) and Dash Berlin (“Waiting”), but what a lot of you might not know is Emma Hewitt’s story. For vocalists, it can be difficult to establish a loyal following because they are typically only “features” on songs and at times, their names are not even included in the title of the track due to a buyout from the producer(s). Emma Hewitt, however, is an exception. Even though her collaborations got her name on the radar, her debut album (“Burn the Sky Down”) in 2012 is what set her apart and helped her to acquire a cult following. She has fought hard for her success and continues to pave the way for artists who wish to have a voice (both literally and figuratively speaking).

Throughout her entire life Emma has dreamt of singing and writing music as a career. At the young age of 21 Emma was offered a production deal in London. Emma and her brother Anthony, who is also her manager, packed up their bags from their hometown of Geelong in Victoria, Australia, sold everything they owned, and moved to London on a whim. Upon their arrival, the scheduled recordings were postponed. And again. And again. These delays went on for months and then Emma and her brother’s money finally ran out. They may have been broke, but this didn’t stop them. Emma worked three different low-wage jobs just to survive, while writing and singing on the days she could get in the studio. There was no way she was going to fail and end up back in Geelong. But after two unstable years, Emma and Anthony were forced to go back home. This was a very dark time for Emma as she felt that she had failed and didn’t know how to get back on her feet. She was very alone, and felt like an outcast too.

She picked herself back up and started a band with Anthony called “The Missing Hours”. Sony Music got a hold of their music and signed them after nearly a year of creating their debut album. After all of this hard work this had to be their big break, but life decided to present Emma and Anthony with yet another obstacle. They were filming their first music video for The Missing Hours when Anthony severed his finger in the first scene. Proper safety precautions were not taken and he was unable to play guitar for a very long time. We all know the saying “when it rains, it pours” right? Well, this is exactly what happened. The label pushed them in a new direction that wasn’t authentic for the group. This is when Emma realized that she never wanted to lose herself again. She and her brother started a small record label, along with a management company so that they could have full control over their musical direction. Emma became resilient and developed a new attitude. She said, “I realized that everything always changes and that is perfectly okay, and a good thing really. Nothing is permanent, good or bad.” Even though following our dreams can be extremely difficult at times, Emma has persevered and has not given up because she knows this is what she was created to do.

These are the times when she finds the most inspiration for her music – when she recalls her own dark times, or even when a friend or fan share a story of a battle that they have had to overcome. She is inspired by an individual’s hopes and dreams. She wants to dig deeper than the surface and really get to know a person and his/her story. After working with a lot of different people, everyone has their expectations for Emma – her management, the labels, the producer, her fans, and even her own expectations. It is very difficult to please all of these people at once, which is why sometimes you just have to let the music run its course and take on its own life. Emma takes herself out of the equation and tries to be true to the song. When she does this, the song comes from a meaningful place and comes much more naturally to her.

It seems as though Emma has big dreams for not only herself, but also for the world around her. She encourages us to ALWAYS question information that is presented to us and to voice our opinions. According to Emma, “We often follow orders and directions without question and without being aware of the impact following these directions may have on our own lives. It is so important to question things when they don’t feel right.” We as individuals have the power to make a difference in this world if we stay true to who we are and not fall victim to the lies that are fed to us. She would also like to see each one of us share what we have with others. Share our success, money, food, housing, comfort…whatever it is that you have…share it with someone else. Her goal is to one day generate enough resources so that she can be in a position to contribute to society and to give back to people who may have less than her. She likes to see the good in every person and believes that each one of us has the capacity to be compassionate and genuine to those around us.