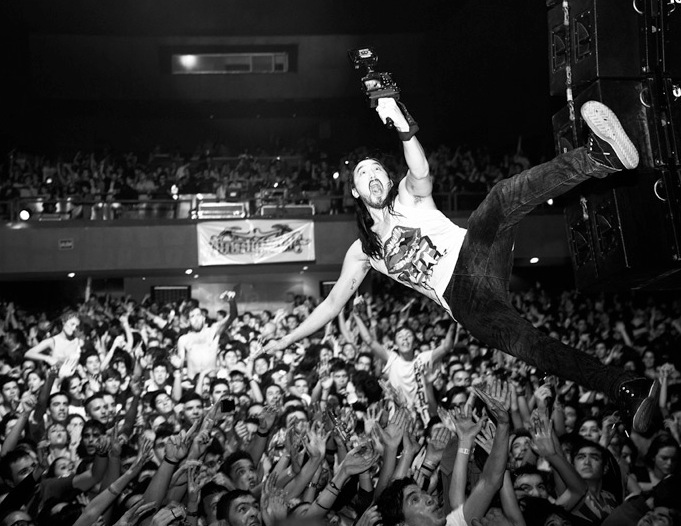 The entertainer, DJ, and producer whose hustle has continues to impact the music industry is about to release his full length LP. Known for his history of tossing cakes from stages to crowds, Steve Aoki‘s latest album Neon Future II picks up where the last installment left us. This time we see new Steve join forces with musicians such as Snoop Lion, Matthew Koma, Harrison, Walk Off The Earth, Albin Myers, Rivers Cuomo, and Sherry St. Germain. The album will also feature the three singles that have been released thus far including the collaborations with Moxie, Linkin Park, and the last one with NERVO & Tony Junior.

As you continue to read into the tracklisting of Neon Future II, there are two names in particular that stick out and do not seem to fit in at all. Two songs Steve Aoki made for the album feature theoretical physicist Kip Thorne and movie director J.J. Abrams. The former is one of the planet’s prime experts in the worlds of astrophysics and gravitational physics. The latter is an accomplished Hollywood titan who has directed Armageddon, the recent Star Trek reboots, the latest installment of the Star Wars franchise, and many other films and TV shows. These are sure to be interesting tunes in the album as the one with Mr. Thorne is set to be an interlude between tracks and the song with J.J. is listed at the end of the album.

Mark your calendars for May 12th to finally have Steve Aoki new album in full. The first part came out September 30th of last year and featured collaborations with Afrojack, Fall Out Boy, will.i.am, Flux Pavilion, Waka Flocka Flame, and more. Although the part I had many dance/club-ready tunes such as “Rage The Night Away”, “Delirious (Boneless)”, and “Afroki”, part II is expected to take a darker approach in Steve’s Neon Future saga. But until the album drops next week, we won’t know much aside from the singles that have already dropped.