VenessaMichaels Is Doing Everything Right With “I Need That”

VenessaMichaels is the hottest new producer coming out of LA this summer. Talent for days and looks to boot, this girl has set her brand up for massive success in 2015. Her latest release is an original production with vocalists Tay Jasper and Joelle James that highlights Venessa’s ear for talent and the duo’s amazing voices entitled “I Need That”. The queen of future bass and future hip hop has built herself a nice little following with the other singles she’s been dropping as well.

“Whatcha On” is a bangin’ original track that is perfect for bright, summertime vibes. Joelle James’ lead vocals are sexy, uplifting, and intwine perfectly with partner Tay Jasper’s strong hip-hop vocal influence. We asked Venessa to tell us a little bit of background about the track and this is what she had to say:

The people came together magically. I met Tay through a friend who was in a studio session and we were both chillin there.  He played some of his music and I was blown away and told him, “we need to link NOW.” So we met back in the same studio in the back and started writing and made the “Sexin With My Ex” track the next day.  We started working together and worked on “Whatcha On” and it came together beautifully. Another mutual friend reached out to Joelle James who thought she would be perfect for the track. She came by and instantly started recording, feeling the melody and dropping down her lines. It’s hard to explain how it came together, but it really just fell into place like it was meant to be.

At only 23 I expect to see really great things coming from this SoCal producer. Cop the free download below, listen to her music on the amazing ToneDen app, follow her on her socials, and get in on this artist while she is hot. Her future is very, very bright. 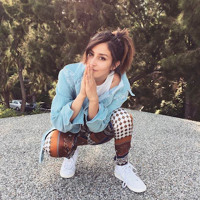