Spotify Shows Us Its Top Paid Artists, But What About An Average?

Music streaming services have been a pressing topic in the blogosphere recently, and for good reason. With premium memberships and “better” quality music being dangled on a fish hook, it’s a shame that the era of costless streaming may be on its last legs. If our beloved community’s days are numbered, Spotify will have a significant role in its destruction. You’ve probably heard an artist or two (or 100) complain about the minuscule payout that Spotify reluctantly doles out.

Nonetheless, the music streaming behemoth has officially doubled its paying subscribers from last year, reaching an astounding total of 2o million. 75 million people are now using the service worldwide, obviously including the free, ad-less platform, and that number may keep climbing at the same exponential rate.

Spotify relinquishes around 70% of its revenue to rights holders, so this massive influx of subscribers may seem like a good thing. These producers are starting to be treated as a lifeless commodity, however, and their art is being maximized in terms of cost-based efficiency. You can even decipher this heartless manipulation in the graph below. 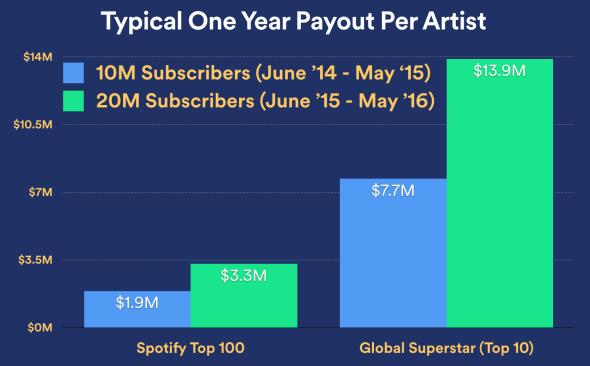 Spotify released this figure yesterday, revealing their incredible mass-marketing and gargantuan net worth. The big wigs of the company are striving for amicability, but simple deductive reasoning can reveal their true intentions. Think about it: 70% of their revenues are divided among rights owners, so the money is being divided among record labels and management companies. In other words, the artists are getting an even smaller piece of the already cut-up pie.

The numbers may look appealing for the Top 100 artists, but take into consideration that tens of thousands of artists sit below these “global superstars.” The average artist definitely makes a diminutive profit compared to these overwhelmingly successful mega-legends, but Spotify will never share those numbers. They generate such an unbelievable revenue that they can hand out over $300 million to the top 100 artists – so why threaten the stability of their let-the-rich-get-richer scheme?

Well maybe they’ll start to share more of this newfound wealth right? Wrong. Spotify’s deficits actually grew last year – in spite of their spike in subscribers and overall users – so their profit maximization strategies have only just begun. On the heels of their $42.5 million contract with Sony, it seems like executives are doing everything they can to raise profit margins, with no consideration for the artist’s benefit.

It’s certainly an everlasting seesaw battle for artists nowadays. The effortless, communal nature of networking and media exposure is almost laughable, yet the actual art is being peddled like a makeshift corporation. Streaming services like Spotify are starting to take advantage of our beloved musicians, and we should certainly be wary of what comes next.