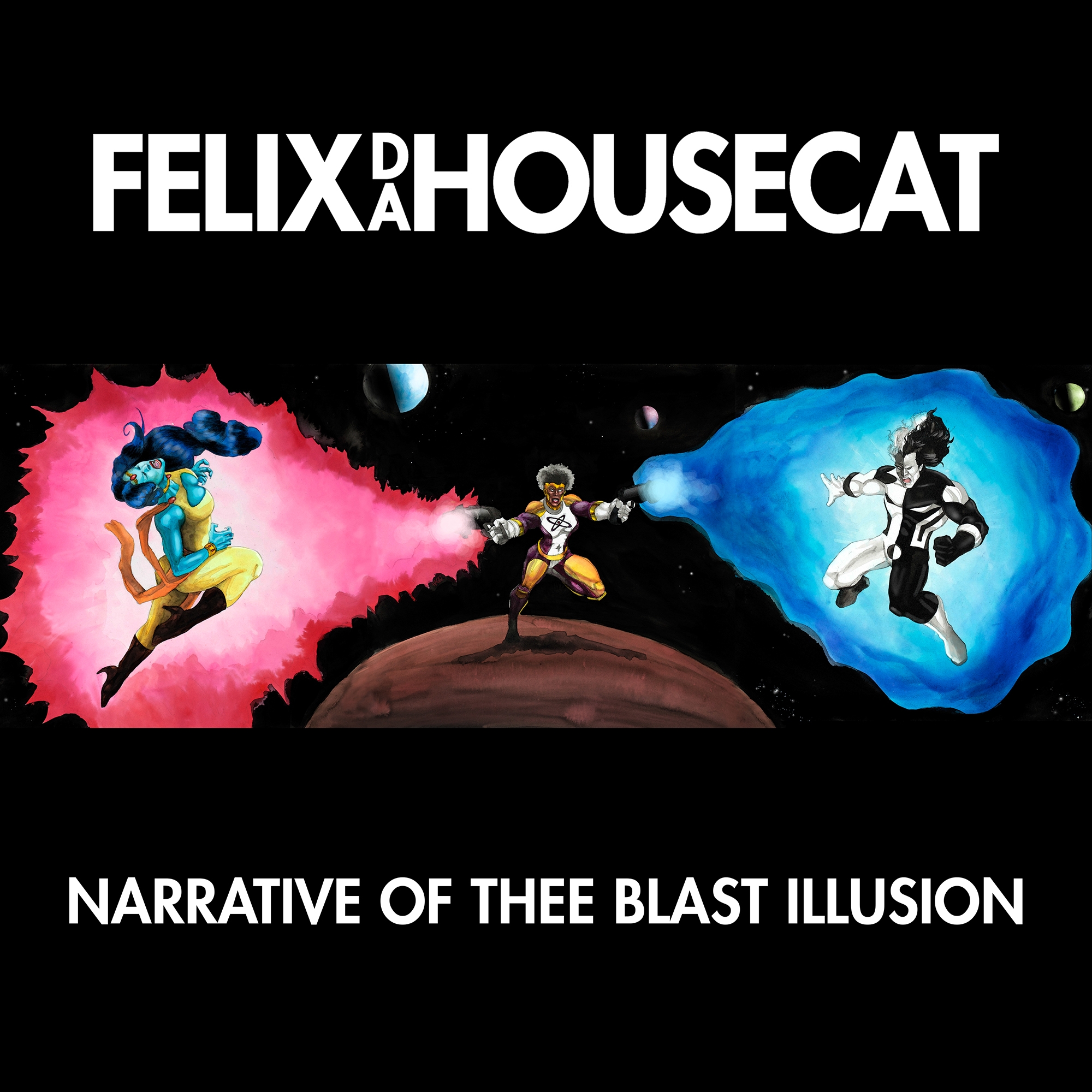 After three years of creative outpour, Felix Da Housecat’s newest album is ready to be heard. Released today on iTunes via No Shame, Narrative of Thee Blast Illusion centers around melodic introspection, a sharp contrast to the dance floor burners we’ve come to expect. In anticipation of Narrative‘s release, we caught up with the Chicago native to discuss the album’s concept and the growth of the Housecat persona.

Stream Narrative of Thee Blast Illusion now through Spotify, and continue reading to hear Felix Da Housecat’s comments on the expression of his own life narrative.

You’re an album guy, but you describe the process as being quite exhausting. Is there anything you do for yourself in order to recharge after expending so much brain juice?

Great question. There’s not much you can do. I always view it as just another life experience. Afterwards, it’s more so like healing, but at the same time, a joyful occasion knowing it’s finished.

We know Prince runs through your veins, and your story on working with Mr. Perry is simply wild. Is there anyone in particular you’d love to collaborate with in the future, or does it just happen as the tracks and ideas evolve?

Both! I’ve always wanted to work with Thom Yorke, almost had him in 2005, but he was busy workin’ on his solo album. Usually though, it happens after the tracks are midway finished and sometimes whilst the ideas are evolving. Other times I have an artist in studio with me and it’s somewhat like a brain; music influences the type of party vibe whilst bouncing heroes and influences.

It’s clear that these tracks all make up the narrative to your life, but is there an underlying theme that ties these individual stories together?

The three characters on my album cover are Nostalgia, Illusion (blasting it wit da bop gun!!), and last, but not least, Paradox. So, this was pretty much my DNA makeup during the process of creating this album, because I was experiencing some of these things. Other titles were more like fantasy second person or stories of people I knew who were close to me at the time I was writing.

Could you explain the 3 characters on the cover art, Nostalgia, Heroine, and Paradox? What illusion are they a part of and how are they blasting you?

Listen to the undertones of the album. The answer lies in the lyrical content and the melodies; they make u feel happy and sad at the same time…which is the Nostalgia. The brave woman, Heroine, is blasting you with the Illusion, which is to say, the world we live in is one big illusion; addiction, fear, sex, lust, heartache, pain, lies, even social media… All these things that we don’t take with us once we leave this earth into the universe, which the characters on the cover are floating in. As far as Paradox… well, there you have it.

I’m obsessed with “Is Everything OK?” and have been pumping it damn near nonstop since its release. What’s your interpretation of the music video?

Well, to me, I found it to be about a couple who are connected with each other, but not accepted in the eyes of the world we live in. And because they want to be happy, they find it hard because the guy is different and not accepted, so the girl goes through so much pain just for them to be accepted (not that she cares). But this is everyday life… So the conclusion after all this, is everything ok? Because everything’s gonna be alright.

Your vibe at shows is off the charts! How would you describe Felix Da Housecat for fans who’s first Felix experience will be this year’s album and tour?

Well the tour DJ Felix is different than album artist Felix. With DJ Felix, you’re getting a show of the history of house music, disco, electro, 80’s, or whatever I’m feeling at that moment, unrehearsed and unplanned; the boppers and I are in it together to experience every live moment. Whereas the album artist Felix is more a creative process where I’m trying to make music that will outlast the next 10 years, which I’ve been so blessed to be able to do since I started producing and making records at 14.

You’re scheduled to play at the new Mamby on the Beach in Chicago. Since you’ve been around house music since it first emerged in Chicago, I’m curious what’s your take on the growing festival scene and how has the community behind electronic music evolved in your hometown?

There’s no place like home. I love Chicago so much, and feel very blessed to even say I’m from Chicago, because I’ve learned so much. As a kid from the scene growing up to Frankie Knuckles, Ron Hardy, Farley Jackmaster Funk, Jamie Principle, Larry Heard, Marshall Jefferson, Robert Owens, and Dj Pierre… These were my heroes and influences, so to see how the scene has evolved, I think it’s great. And the beauty about Chicago is there’s so much music and history there; you can still go experience 1984 or 1986 loft parties, clubs, and festivals that still give tribute to our forefathers.

Are there any parting words you’d like to leave with your fans?

Wow! Hmmm, I wouldn’t be able to finish this sentence, but to be able to share my art to the world and still be relevant is a blessing, so I have to thank the fans for being patient on this journey with me. I’ve had some crazy ups and downs, but the true fans, and boppers, and even my management have truly been so supportive and believed in my vision to a point words can’t explain… Until we dance again, peace. =^,,^=