LA/Chicago’s Trentino has been putting out bangers for quite some time. Most recently he and partner Maple Syrup teamed up for a sweet re-work of T-Wayne that brings a future bass vibe to the swagged-out first line of “Nasty Freestyle”. Immediate recognition that this sample would be a hit to future-loving ears boasts just one thing he does well: knowing what people want to hear.

Production is perhaps his most notable talent which includes a library of songs you need to be listening to. House, Future, Future House, Break Beats, Nu Disco–there’s no genre this man can’t conquer. The same charisma that makes him insane behind the decks permeates through his productions, making them infectiously happy and upbeat. He infused a future house feel into Bunji Garlin and Nigel Rojas’ “Differentology” that is absolutely killer.

Another original track of his you’ve got to get on is a brilliant club-bouncer dubbed “Bitch”. Sampled from everyone’s favorite TV show Breaking Bad, he genuisly made Jesse Pinkman’s notorious line into a dance floor destroyer. You will be shocked at how Trentino’s professional finesse of the repeated expletive awakens the dance floor and gets everyone smilin’ and groovin’.

Also on his long list of commendations is master turntablist. The 2013 Red Bull Thre3Style U.S. Champion, Trentino can mix, finger drum, and flip-and-turn a record in ways my words can’t do justice. You have got to watch this man work the tables better than anyone in the U.S. here. 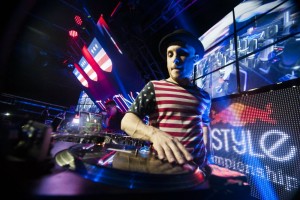 Trentino has set himself up for greatness. If you aren’t already on that bandwagon, be sure you jump on now.