Music magazine, online publication, music chart aggregator – Billboard has nearly done it all in its lengthy, 120-year-old history. Since the first issue hit the print, Billboard has risen to become the world’s foremost authority on all things music – whether it’s rock, hip-hop, pop, or dance. The Billboard brand has been attached to nearly every aspect of the music industry, whether its record labels or award shows, except for one massive market – music festivals. This weekend, Billboard will be taking over Jones Beach Theater in New York for the inaugural Billboard Hot 100 Music Festival, which is hosted by Live Nation and celebrates the artists that grace Billboard’s annual Hot 100 list.

The maiden edition of Billboard’s Hot 100 Music Festival will feature headlining performances by The Weeknd, Kygo, Skrillex, Axwell /\ Ingrosso, Justin Bieber, Lil Wayne, and more – an impressive group of headliners that are sure to pack a punch. Also, the newest additions to the festival include Conrad, Zella Day, and Tori Kelly, in addition to an appearance by the man behind “All Gold Everything,” Trinidad James, and Billboard’s very own Dance editor, Matt Medved as Sicarii, who’s played  outstanding sets from Burning Man to Amsterdam.

With three stages hosting several of the finest chart-topping and up-and-coming acts from pop, EDM, hip-hop and rock, the 2-day affair is bound to be a memorable experience for any music fan. Don’t sleep on this one!

Tickets to Billboard’s Hot 100 Music Festival are still available here, and check out our awesome giveaway to win a meet & greet with Axwell and Ingrosso. 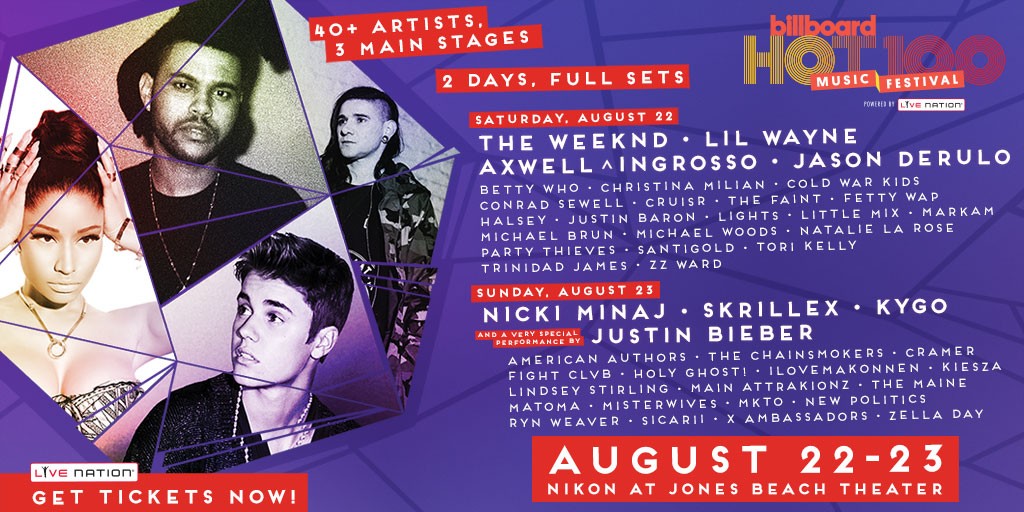