Insomniac’s New Policies Bring the Hammer Down on Photographers

A few years ago, when EDM was still growing and many were still working out the kinks with how to operate within the space, EDM photographers and their practices were free form. I got my start by messaging a promoter on Facebook and asking if I could shoot an event, just to try my hand at it and see if I could do it. Back then, that was the easiest way to pick up experience, especially since there wasn’t an influx of people aspiring to be photographers.

Over time, as the amount of DJs grew, so did the number of photographers, especially as some were being publicly validated on social media by artists and festivals. Though, there still wasn’t much procedure in place at some festivals and venues to regulate photographers, and there were always a few individuals who evaded protocol completely and snuck in equipment to festivals, thus creating more problems for those who had gone through the right channels of contacting the manager/the artist directly, or aligning themselves with a media outlet.

As time went on, the over-saturation of photographers became just as much of a problem as over-saturation of talent. Photographers who just wanted to get into shows or get their name out there were hitting up artists and volunteering to work for free, thus undercutting the photographers who put in their time and wanted to move to paid positions with the artists they consistently worked with. Suddenly, it became hard for artists and managers to see the worth in paying someone, when there was an inbox of free labor waiting for their big break. This issue, though never discussed publicly, has been an unresolved topic in the industry for years. 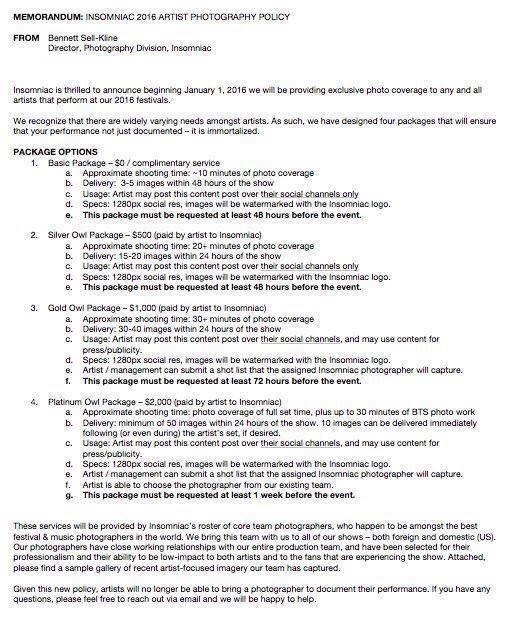 Recently, we’ve learned through various sources who wish to remain anonymous that Insomniac unveiled a new policy for photography at its shows, which will go into effect next year. Personal photographers (paid or unpaid) will no longer be allowed to accompany artists; instead, the festival’s official team of photographers will provide services on a tier-based system. The free tier guarantees an artist 3-5 complimentary images to be shot during the 10 minutes the photographer is present. The artist can’t use the images for marketing, and they must request this service at least 48 hours before the event. There are also three paid tiers, which increase in time allotted and amount of images given to the artist, ranging from $500-$2000.

While that’s barely a drop in the bucket for artists like Tiësto and Above & Beyond, it’s a much bigger issue for a majority of artists, who can’t justify spending that type of money on photography for just one event. This policy raises a multitude of questions and concerns, including how well this plan can remain in place. If a major headliner has a personal photographer that has toured with them for years, would they really be okay with having to pay to use another person for just the performance, or would Insomniac turn the other cheek and allow that person to not be held to the same restrictions as others? Also, what restrictions will now be placed on members of the press? Though press photographers have never been allowed stage access due to insurance concerns, will they be permitted to shoot at all, or will bloggers have to use images from the same pool of Insomniac-approved images for stories?

Though it’s semi-understandable why Insomniac would draft a new policy, on paper it seems like it would be more trouble than it’s worth. If the main concern was safety and professionalism, the better course of action might have been opening a dialogue between photographers and staff to ensure that all parties involved could walk away with a better understanding of how to move forward. It’s sad that the actions of a few have to ruin the experience for all of us. There are many who attend festivals with cameras not because we’re hungry for recognition, but because we enjoy the art and creativity of capturing the unforgettable moments of an event.

Should Insomniac push forward with implementing these policies, it will be interesting to see what kind of ripple effect this will have for other major dance music events. Though each festival has its own procedures when it comes to photographers, the resulting shutout could alter the way other festivals choose to operate, especially when competition to take part in events like Ultra, HARD Summer, and Electric Zoo increase.

Insomniac did not have an official statement.