Aspire to Inspire 087: The Festival Guy

If you were given the opportunity to spend every day of your life around the happiest people in the world, would you do it? Well, Tucker Gumber, who many know as The Festival Guy, has chosen to do exactly that and is now reaping the benefits.

Starting in 2011, Tucker has spent the last five years of his life traveling all over North America to attend and review festival after festival in order to help shape them into the best possible experience for the festival goer. From the moment he set foot on the grounds of his very first festival, he found himself looking for things that could be changed and improved to make things run a bit more smoothly. This immediate draw to the way events work has a lot to do with the path he found himself on as he grew up.

From the very beginning, Tucker knew that he would end up doing something that involved a lot of people. At a young age, his interest in sports like snowboarding and golfing inspired him to chase the dream of one day opening and running a major ski resort or golf course. Having such a clear idea in his mind of what he wanted to pursue, he majored in restaurant and resort management, which was the perfect fit for him when he went to college. However, things changed after he stumbled into the campus radio station his freshman year.

“I went to college with the idea that I wanted to be around people on vacation. Restaurant and resort management was an obvious choice but by senior year I had learned enough about the industry to know that I did not want to be in it. Thankfully the education I received was applicable to many other areas. My best experience while I was in college was working at the college radio station. I found the station by chance my freshman year when I was lost on campus. I stumbled in, they told me a bit about it, I signed up, and then before I knew it, I was the first freshman with a radio show as DJ Hollywood from 4am-6am on Tuesday mornings. I had radio shows all through college and eventually worked my way up to music director. Working in college radio gave me access to free concert tickets because we would give them away and people would forget to pick them up. It was during these four years that I really discovered my love and passion for live music.”

By the time he attended his first festival, he had a substantial amount of experience in the business and sales world under his belt as well. One of his former employers had even allotted a certain amount of time out of each day to have employees read inspirational and motivational books that had a connection to the business world. What does that have to do with being The Festival Guy?  Well, everything really.

“Before I went to my first festival, I had been reading all of these books about finding your passion and what makes a successful company. It was the books’ message combined with my college degree that gave me the skill set to see festival industry as a whole. That’s where I got the idea to review festivals in hopes to get free tickets. It worked. The more festivals I went to the more I learned about them and eventually realized that if I could find a way to help make festivals better then I can create a career for myself.” 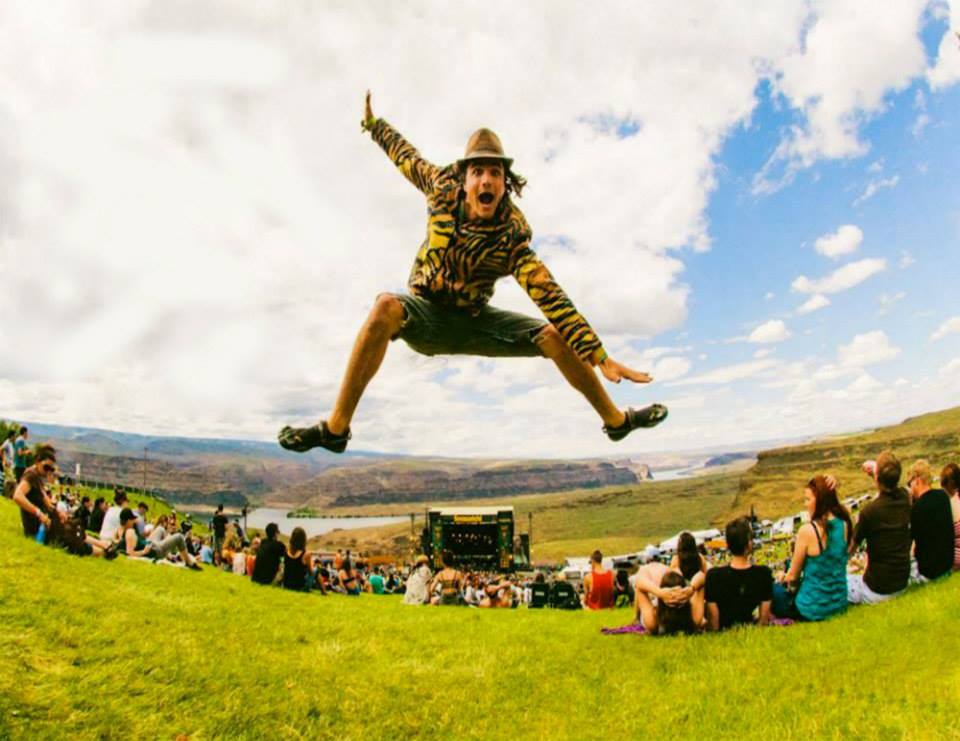 But there is still so much that goes into who Tucker Gumber is as a person. Surely there are so many of us out there that would love to leave our worlds behind and travel from event to event, festival to festival, making sure that the people that attend them are having the best time they possibly can, but it takes a lot of guts and a huge leap of faith to actually go through with it.

“It was definitely an uncomfortable leap in the beginning because I left a pretty successful sales career to do it, but I really believed that the time was right and I really believed in my mission. There comes a point in your life where you can’t look over the edge. You just have to go for it and do a backflip over it. The big thing to know is that it’s going to work out. It might not work exactly the way you think it’s going to, but when you fail you’re going to learn from it and while you were trying, you will have met a handful of people that are going to be very important in whatever your eventual success is. It’s really just taking that leap and saying, ‘I’m doing it’ because when you follow your passion, you meet other passionate people and you learn from it. The whole time you’re getting closer and closer to finding whatever it is that your real calling is.”

One particular figure of inspiration that Tucker has found solace in is Alan Watts. To be even more specific, Watts’ lecture about what people would do if money weren’t an object. At the end of the day, what drives us and inspires us should be what we chase after, not just a paycheck. It may not be the most glamorous and flashy lifestyle out there, but if it makes you happy and you are doing something good in the world, why not? The flip side of this, however, Tucker has also shed light on. Finding ways to generate income is not always as steady as one might hope, you realize pretty quickly how much “stuff” you do not actually need.

In addition to Tucker’s extensive work in making festivals a better place for all of us, including the launch of his mobile app FestEvo, Tucker has a plan for all of us to make the world a cleaner place as well. When asked about a change he would like to see in the world, he tells us that it starts with us.

Starting with festivals, we need to clean up after ourselves. Tucker has a motto that he wants to spread called Leave No Trace+1. The idea is to get half of the festival crowd to pick up after themselves plus one other person throughout the day, if they did then it wouldn’t matter what the other half of the crowd did. The venue would be spotless. The more people that catch onto such a smart and helpful concept, the more it will spread beyond the festival gates and make our world a much cleaner place. Who wouldn’t want to be a part of a wonderful movement like that? With dance music and festival trends being referred to as a movement by so many, we can all definitely get on board— taking it to the next level and showing the world the kind of love and respect that this movement is all about.

Follow Tucker’s adventure as @TheFestivalGuy on all social networks.

Avicii Unveils The Most Innovative Marketing Campaign Around For ‘Stories’

The World's Smallest Wireless Headphones Are Here, With A Twist