Another Major Label Caught Ripping A Track From An Indie Label

In a classic David vs. Goliath story, we have yet another established power in dance music believing that they are above the law when it comes to copyright infringement in regards to an artist’s work. With independent labels pushing boundaries with new and forward thinking music, the majors have been breaking a sweat, apparently unable to produce original content, as is with this most recent case.

Audiophile’s subsidiary label, Audiophile XXL, is known for putting out some of the most trend setting future, bass, and tech house right now. Allegedly, one of their more recent releases “Powerfist” by up-and-comer Landis LaPace was plagiarized and reworked into an entirely “new” track called “London Baby!” by none other than Michael Woods to be released on Armada Deep, an otherwise well-respected label now taking heat for the recent scandal and having their credibility called into question. You would think that with such a reputation like the one Armada has built over the years, accusations like the ones made against them would be handled much more seriously than they are and not with short handed responses such as “we’ll look into it” or vague attempts at getting “some clarification.” Armada even went as far as to claim they sent the two pieces to an “independent musicologist” for evaluation, to which they responded, claiming “London Baby!” was “not making any copyright infringement.”

Now I’m all for major labels releasing music and can respect the hustle to some degree, but at some point it becomes less about the hustle and more about maintaining status as an influential label within an ever growing community. It seems more common nowadays that any solid track an up-and-coming label releases is up for grabs to be reworked and repackaged by a more influential artist. This is where the issue lies. This major label basically blowing off the little guy with a half assed explanation for having one of their artists caught blatantly ripping off a far less established act. Then instead of issuing the takedown or halting promotional efforts, they go and premiere “London Baby!” on Dancing Astronaut, who apparently are being understandable with Audiophile’s concerns.

Now one can easily counter this argument with “Hey! You can’t prove that he stole it or was even aware of the song in question! This is a witch hunt! Damn you, Your EDM and damn your belief in standing up for what’s right!” Well here’s a nice piece of proof of Michael Woods directly supporting the track on Soundcloud with a repost and including it in several of his sets.

Thought you’d pull a fast one, eh Michael? And I’d expect more out of Armada for not handling the situation more professionally. As uncouth as the situation sounds, I gotta give it to Landis LaPace for making solid tunes that are on point enough so that major artists want career-risking decisions by plagiarizing them and thinking they won’t get caught. Not today, gentlemen… not today. Here’s a list of those duped by Michael Woods and Armada’s antics. 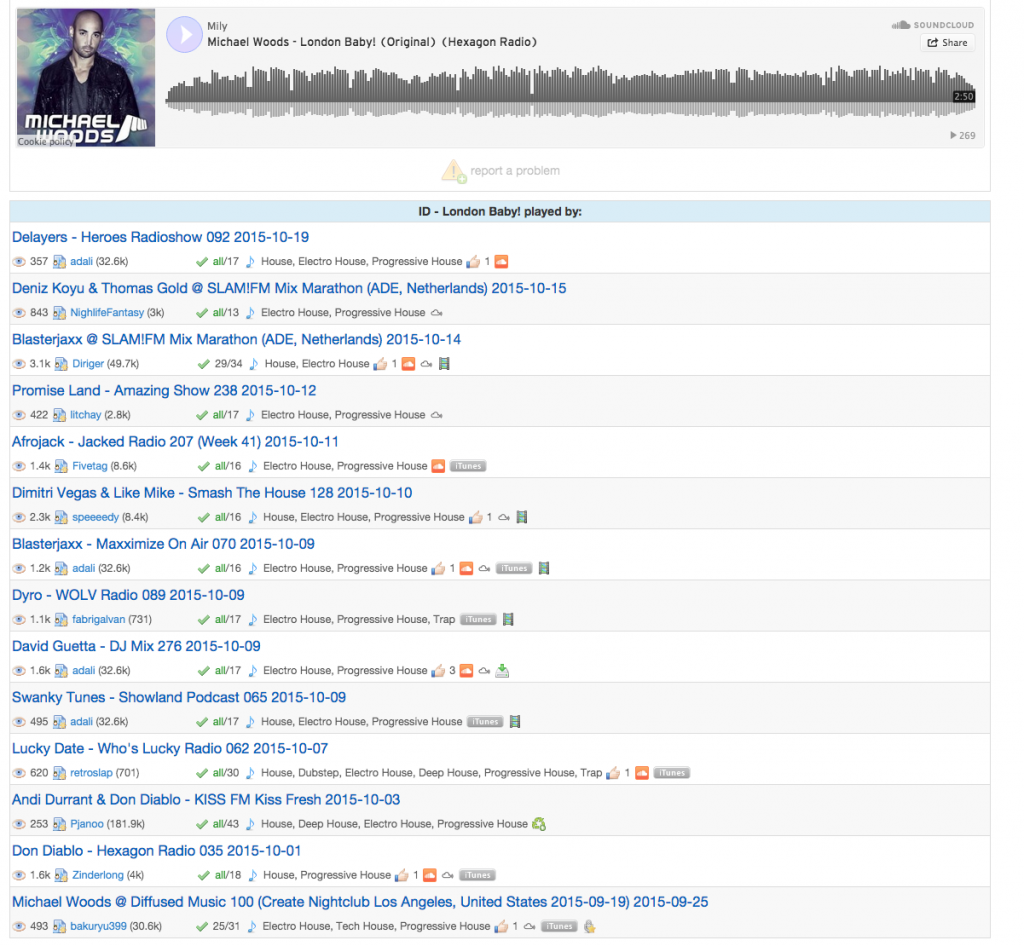 What the outcome will be, however, we cannot say. As it could go in favor of the “so many tracks, some are bound to sound similar” direction or hopefully “major artists should be giving credit to less established acts and be elevating them when they are in a position to do so”. But at this stage, only time will tell.

Again, this is only a subjective piece. But don’t take our word for it. Check out both tracks below and listen for yourself…