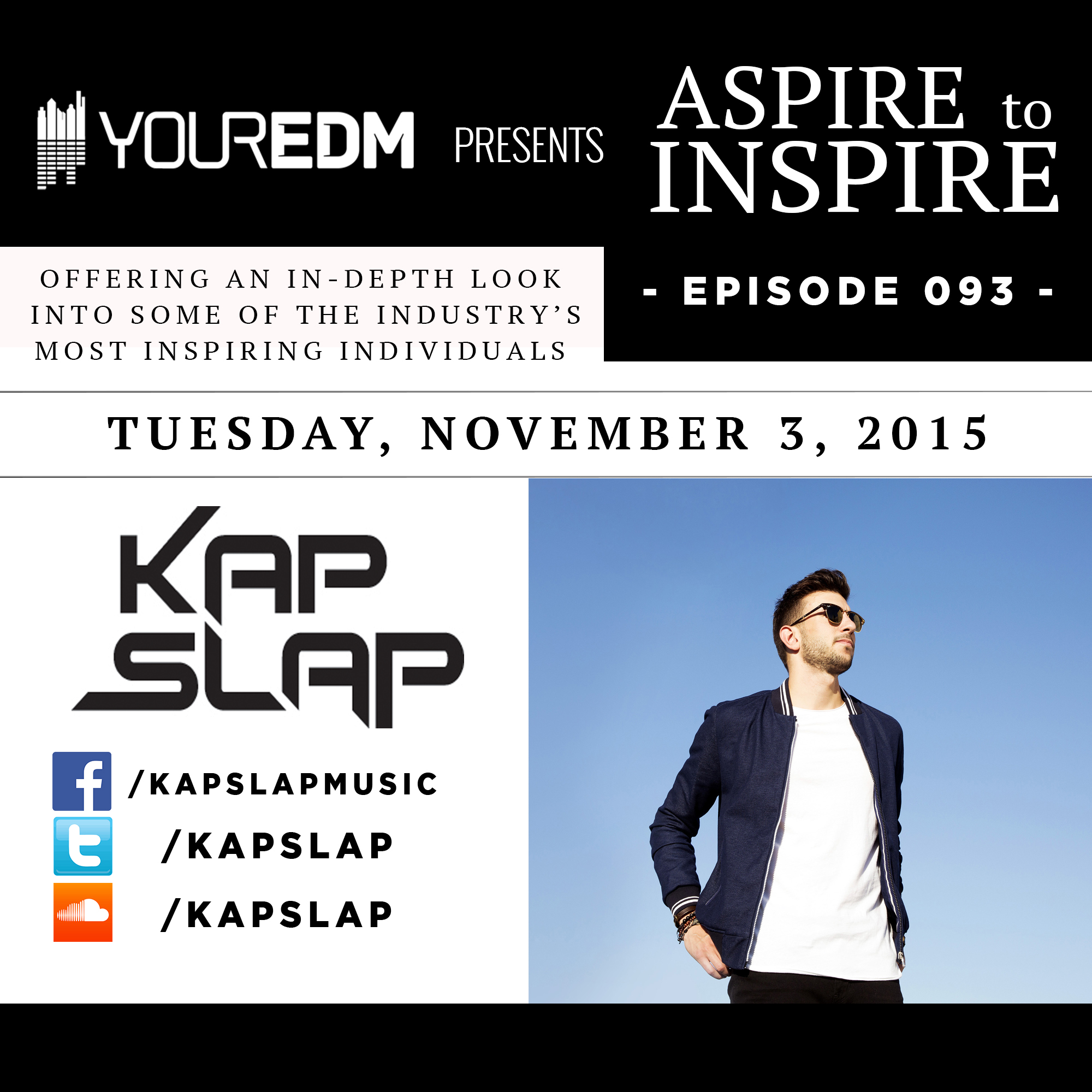 Our beliefs and the people we surround ourselves with help shape our character. Though some people refuse to be a product of their environment…people like Jared Lucas (aka Kap Slap) are actually better for it.

Jared’s story, like many of ours, began in church. Raised in Lexington, Massachusetts, Jared was the eldest of two and was raised to be very active in his religious community. Although his beliefs changed he still remained dedicated to the church, where he lead his worship band in youth group and abroad on annual missions trips to Haiti and the Dominican Republic. In high school he formed his own two-man band with a friend and joined a school jazz program, which greatly expanded his musical horizons. These experiences sowed the seeds of creativity in him as he then moved on to college.

Many people use college as a place to slowly grow into adults, but that transition happened much faster for Jared. As if starting college at Lehigh University wasn’t already a challenging experience, his mother passed away after a 4-year battle with breast cancer within days of his arrival. Though he had known of his mother’s illness for years her passing was still difficult, as only his father was home to take care of his sister who has very severe cerebral palsy. It would have been understandable for Jared to take time off so early in his collegiate career to stay home with his family, but Jared wanted to honor his family’s wishes and decided to stay in school.

Jared made sure to make the most of his time at Lehigh. He was accepted into the Honors Integrated Business and Engineering program where he pursued a focus in Industrial Engineering and joined The Kappa Alpha Society, where he would meet many of his life long friends. After the fraternity hired a mashup DJ named Milkman for a party, Jared was inspired and believed he too could perfect this craft, especially given his already musical background. He began creating mashups for fun – mostly of popular party songs and the dance music that started to become popular during that time – and gained a considerable amount of attention online. In 2011, he connected with his soon-to-be manager, Alex from California, who helped launch the Kap Slap machine into the stratosphere. Jared was now making appearances at spring break parties in Mexico as well as nightclubs across the country, including Vegas.

But like many DJs who began in college, the pull of schoolwork and this growing career began to pose a problem. The time he had available to study was now consumed by the pressure to continue making music as well as traveling the country. At this time Jared also started to recognize the very real possibility of being a full-time DJ, as he was already making enough money to support himself by his junior year. But Jared was committed to the promise he made to his family who still weren’t completely on board with the idea of him being a DJ, and finished out his remaining year of school. By finding the proper balance between studying and DJing, Jared graduated on time in 2013 with his Honors IBE degree and shifted his efforts to the next stage of his career

He spent the next two years in Hoboken, New Jersey focusing primarily on writing and producing original songs in addition to the mashups and touring. This was an especially daunting task since he had such a large following of fans who have grown accustomed to a certain level of quality that is associated with the Kap Slap name. The personal desire to prove that he was more than just a mashup artist was incredibly strong, and Jared occasionally wasn’t sure if the music he was making on his own was truly good enough.

I almost went backwards. Where most people would start with a big volume of originals and get noticed and then learn how to be in the public spotlight, I’m coming from the other end. I have all these mashups and fun things that people know me by, but now I have to match the music I make with my expectations and what I hear in my head.

In January of 2015 Jared released his first original track, but it wasn’t the only original he’s made since then. After changing his production style, he started churning out tracks in order to discover his own personal sound and create emotionally driving music. That big breakthrough, paired with learning how to reach out and collaborate with others, led Jared to make the life-changing decision to leave the East Coast and move to Los Angeles.

Moving to Los Angeles was difficult for multiple reasons. On the one hand, it was the opportunity Jared needed to connect with other producers and songwriters so that he could continue growing his career. However, a move across the country would make it harder for him to see his sister. Due to her cerebral palsy, it was difficult to stay in touch through texting or calling; the only real time they could spend together was in-person. Even though Jared eventually made the decision to move to LA with friends Gazzo and Charlie Darker, he doesn’t use the distance as an excuse; he makes sure to regularly return to his father’s home in New Hampshire when not on tour to spend time with his family. Growing up with a severely handicapped sister has taught Jared to truly appreciate what he has and to never squander his opportunities. His sister is not only his biggest inspiration, but also his greatest motivation to give back to others any way he can.

Before her passing, Jared’s mother began a foundation called P.I.C.K (Parents of Infants and Children with Kernicterus), which was designed to help raise awareness of a condition that only exists due to negligence and human error. Many people do not know that having Jaundice as a child can lead to severe Cerebral Palsy and this foundation is dedicated to informing young parents-to-be. In the hopes of continuing his mother’s legacy, he also wishes to donate the proceeds of an upcoming single to the foundation, as well as contribute to breast cancer research. But he doesn’t want to stop at helping raise awareness for issues that impacted his family; Jared plans to work with a close friend from his old church community as she begins to build an orphanage in Haiti.

The perks that come with being a DJ may be great, but Jared doesn’t want to solely be defined by his accomplishments. To him, it doesn’t matter what main stages he performs at or the number of fans he has on social media; Jared wants to stay the same person and remain true to his values. At the same time, he wants to create music that can help get people through the same tough times he had throughout his life. Music has the power to heal and change the world; Jared just wants to add a few more songs to help do it.

To learn more about P.I.C.K and Susan G. Komen for the Cure or ways you can help raise awareness, visit their websites.