by Cameron Gregg
in EDM News, Events, Live Sets, Reviews, You Might Have Missed

With multiple festivals happening on the weekend of Halloween this year, we wondered how Suwannee Hulaween would distinguish itself. On the grounds of the Spirit of Suwannee Music Park, the overall atmosphere couldn’t have been more naturally beautiful as well as naturally spooky. Though the festival itself mainly centered around the jam band/funk scenes, the festival’s hosting band, The String Cheese Incident, dabbles in electronica (among a multitude of other genres) for many of their extended jams. Thus on this year’s line up you saw heavy hitters like Pretty Lights, GRiZ, and Odesza to name a few.

After our caravan arrived on the grounds (and after wading through the lovely cluster of happy hippies near the entrance) it was time to see what the day would bring. 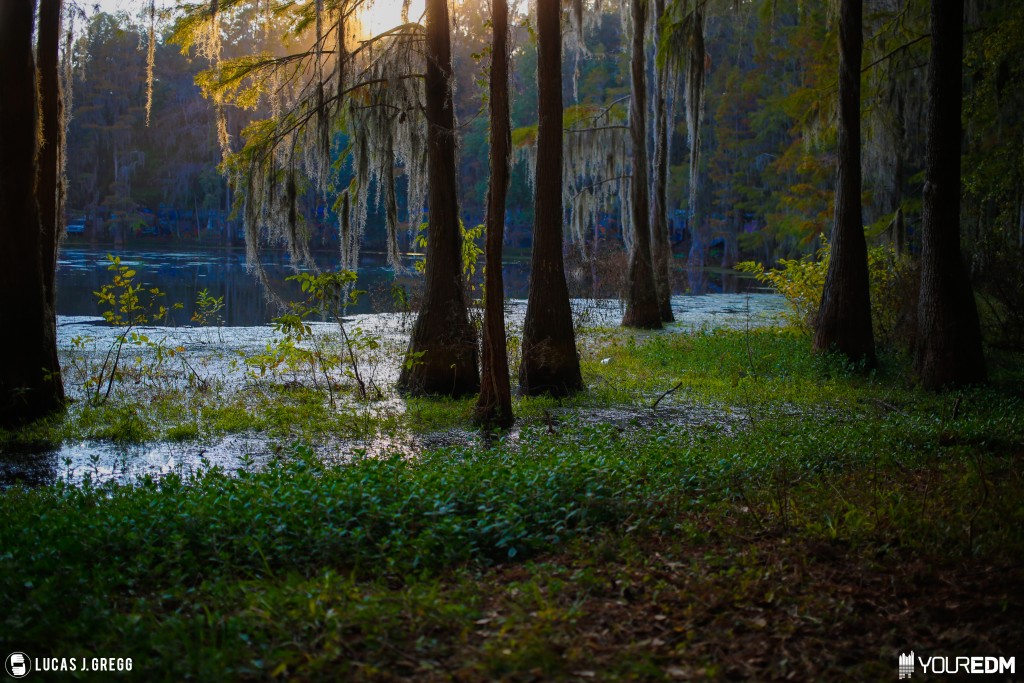 The music park itself, though beautiful and with no lack of space, was a little hard to navigate both on the way in and during the night due to lack of light. So our first stop after setting up shop was the Floozies. Located at the outdoor Ampitheater Stage, the music was on point. They seemed to read the temperature of the crowd well, incorporating funk and rhythmically pleasing sequences and beats. Because of their time-slot, the crowd wasn’t as raucous. Though they could have easily amped it up that way by playing late night.

Then it was time to get ‘cheesy’. The weekend was the first Incident I’d ever attended and needless to say, it was a great introduction to String Cheese. The group is virtuosic in the mastery of their instruments, their stage presence, and their ability to read the crowds’ needs seamlessly. Their first set basically reminded us why we all came out to Hulaween. We came for a rockin, funky, groove-filled good time.

The next big show was Pretty Lights, a set we’d all been looking forward to. The great thing about this particular Pretty Lights set, was that he followed no pattern and didn’t rely referencing previous shows. He told the crowd that he was a mad scientist this Halloween, so we all prepared for something different. And what a differently fantastic show it was. As soon as he opened with “Up and Down I Go”, I knew that this would be a great night of that old school Pretty Lights sound that I and this crowd were craving. Throughout the set he also peppered in some other crowd favorites and some choice tracks off of A Color Map of the Sun. 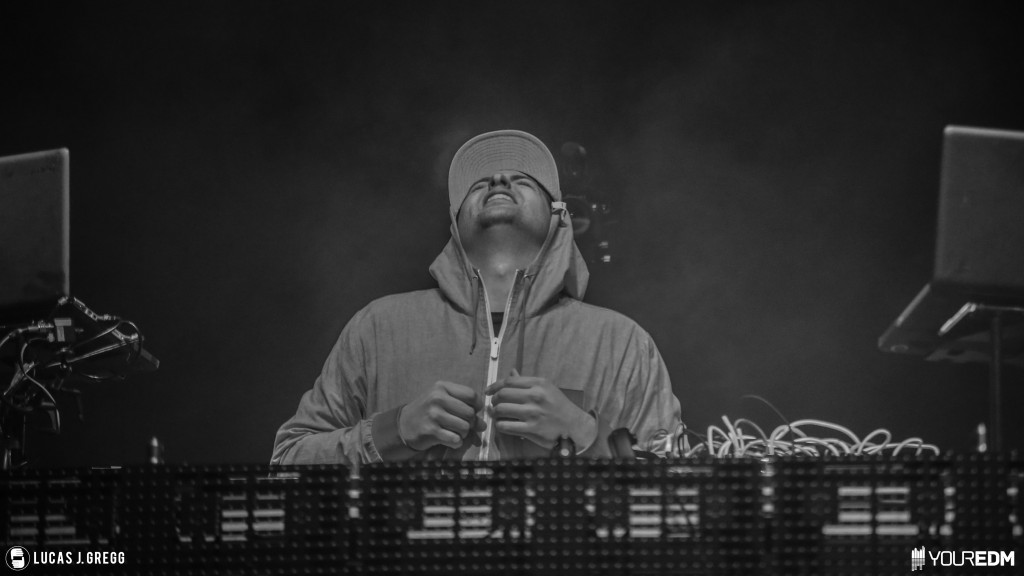 After Pretty Lights, none of us wanted Friday night to end. So we went over to the land of the trippy art instillations at Spirit Lake. But when we passed under its multi-visual dragon gate, we realized that Dopapod was playing at one of the stages inside. The rest of the evening consisted of running from stage to statue, to mural, to user-created sand art, and then back to the stage again. It was a whirlwind of a first day. 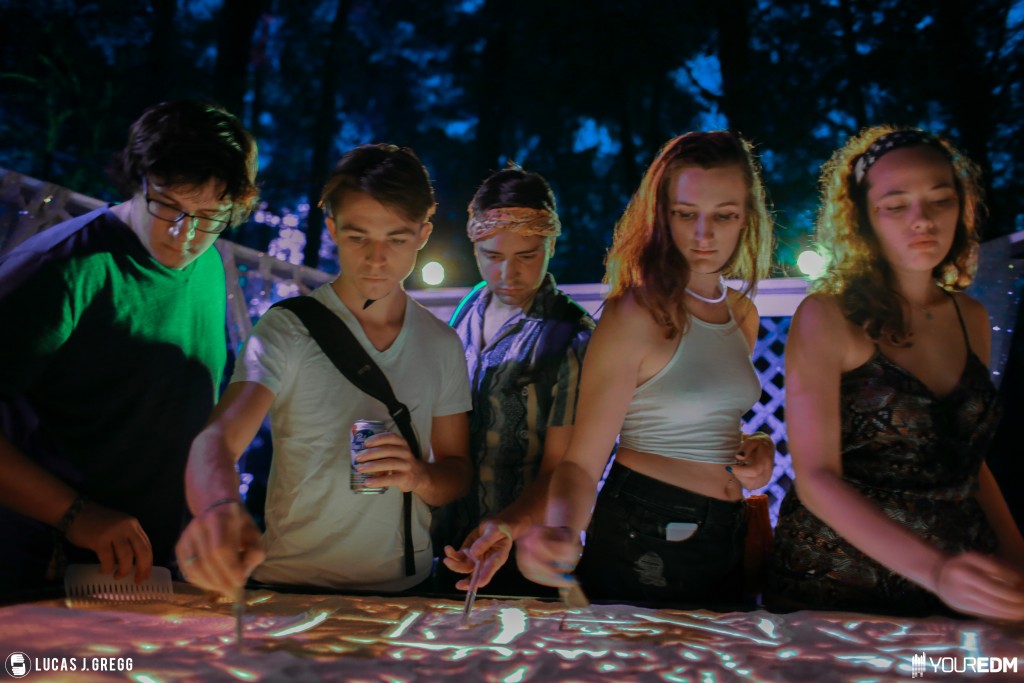 Hulaween day two only continued to spread the positive atmosphere felt throughout the Suwanee Music Park. After a night of late-night partying, one would expect everyone to be less lively, but energy surged from the massive crowds checking out the sets during the day. Cars still drove in as single-day ticket holders flocked to check out artists like Chance The Rapper, ODESZA, and Slightly Stoopid. 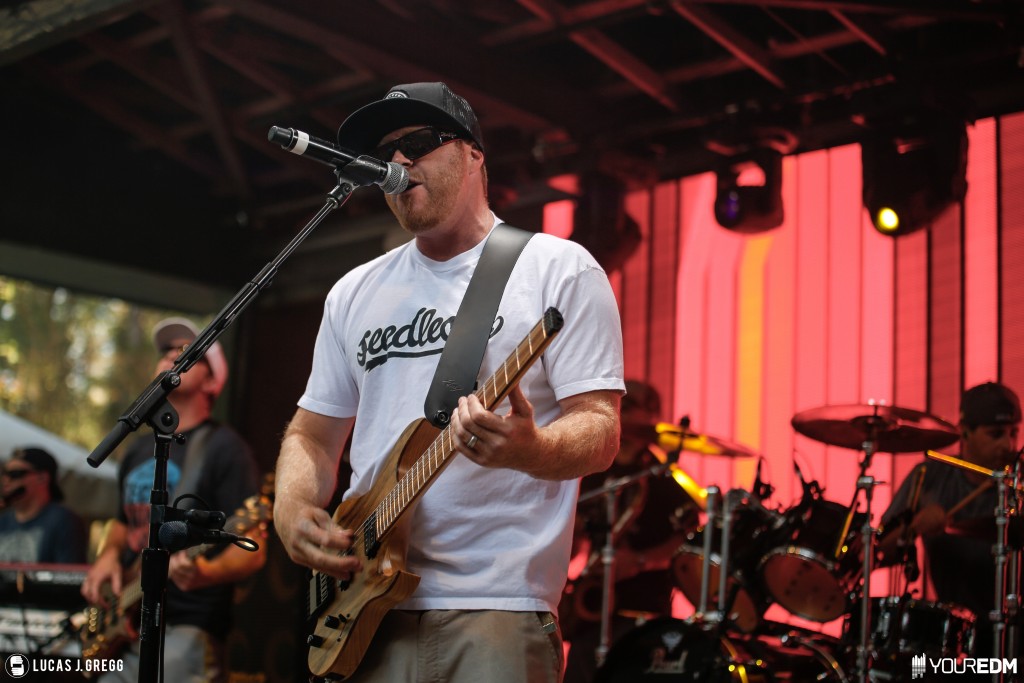 A small but dedicated crowd hit the main stage in the mid-afternoon to check out the bluegrass stylings of the Sam Bush Band, the pioneering group behind the “newgrass” movement. Slightly Stoopid followed up Sam Bush Band with their iconic reggae/rock fusion, attracting a packed crowd around the always-tight Amphitheatre Stage. The Amphitheatre Stage’s space to attendee ratio only worsened throughout the night, but more on that later.

As per usual, String Cheese Incident played three extended days for their Main Stage residency, but the middle of these sets marked a departure from the band’s usual jamming. The band dubbed this set the “Ghoul Train”, a spin on the classic television/music show Soul Train. Fitting for the title, the band played a myriad of ‘70s and ‘80s covers, including a jammy spin on “September” by Earth, Wind & Fire. The best part? GZA, of none other than the Wu-Tang Clan, hosted the set, a surprising addition for anyone not checking up on Hula’s social media announcements.

As the sky darkened, the lights of  Suwannee came to life. The Spirit Lake section of the festival grounds remained a hit, with more art installations than what most festivals feature in the United States. Crowds moved in and out of the Lake area and the main stage field, where String Cheese played another eclectic set. Many guests were surprised to find the South African band Goldfish playing the Spirit Lake Stage, making up for their cancelled set earlier in the day. 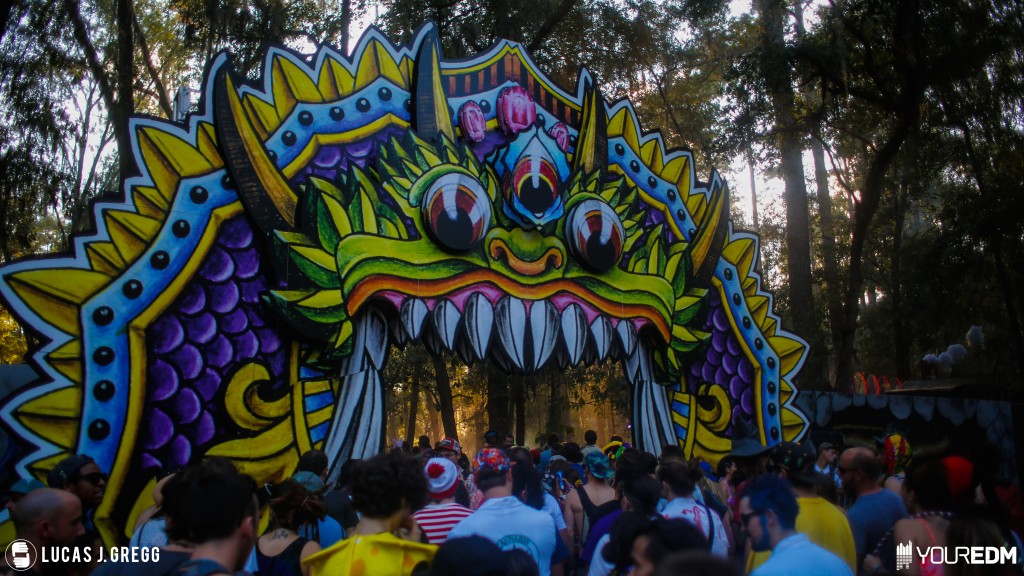 As Cheese came to an end, hordes of fans descended upon the meager space provided by the Amphitheatre Stage. ODESZA performed to an enormous crowd, one that proved their popularity had eclipsed the Amphitheatre’s stage perimeters. Still, the stage design complemented their uplifting music, with the duo playing tracks from early albums like Days Gone By to their recent collaboration with Little Dragon. The hour-and-a-half set gave guests the necessary energy boost for the next brilliant performance. 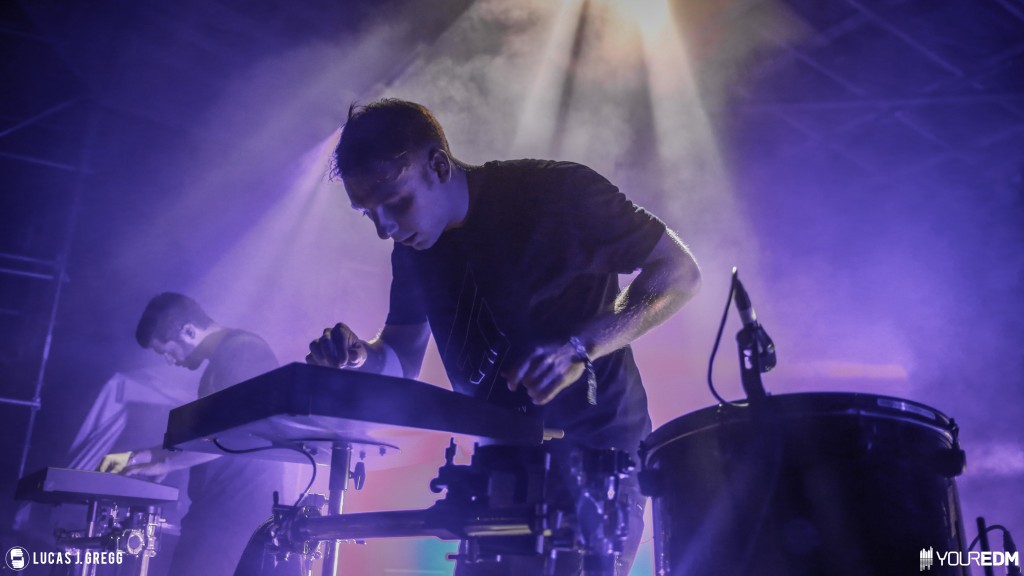 Many Hulaween diehards were surprised to find Chance The Rapper and his backing band The Social Experiement on the 2015 lineup, but the organizers picked a perfect hip-hop act to close out the Main Stage on Saturday night. Chance brimmed with energy, dancing and jumping around stage as hits from his explosive mixtape Acid Rap morphed into jazzy remixes, courtesy of Social Experiment members like Donnie Trumpet. Just an up-and-coming artist a few years ago, Chance delivered a headlining-worthy set to close out the night. 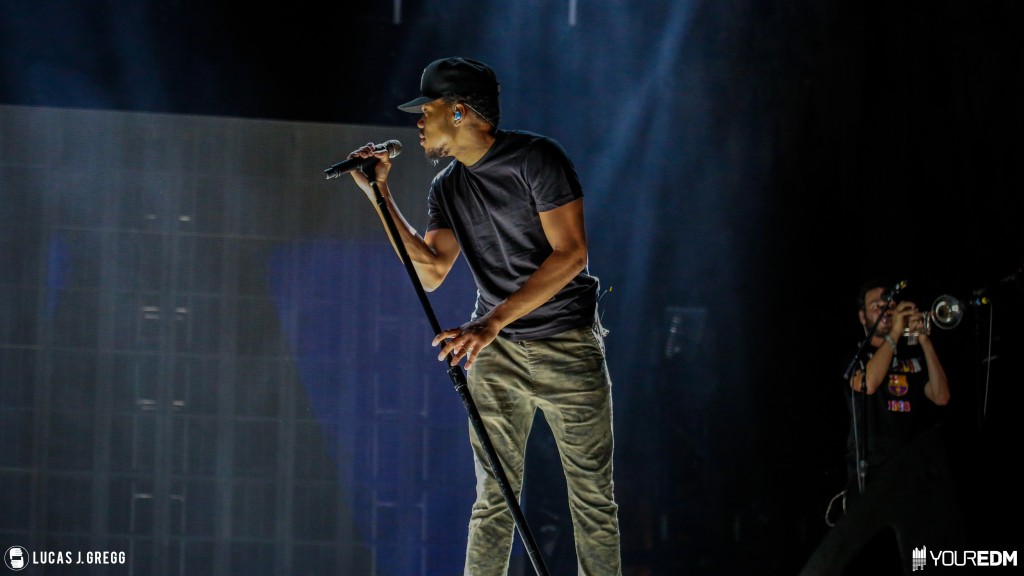 Sunday (By Cameron Gregg)
It had been a long night and it had felt like a longer weekend. There’d been funk jams and campsite jams into the early hours of the morning. But it wasn’t over yet. We all knew that we wouldn’t be able to sleep in too late because GRiZ was scheduled for the mid-afternoon.
GRiZ couldn’t have been more at home at the Amphitheater Stage. The bodies were tightly bound. The bass and sax vibrated off the rock bleachers on either side, and the sloping trees provided a sick backdrop for the lights and effects. Everyone got into it. GRiZ was lively as usual and it wasn’t long before everyone was shouting. 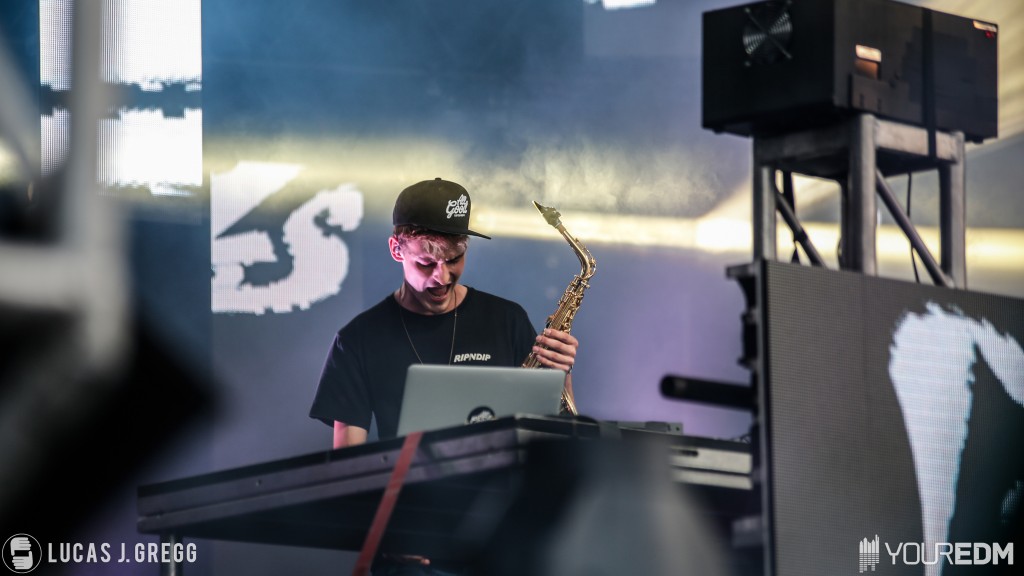 Shortly after, we were treated to some Sunday String Cheese, who happily obliged the crowd with some afternoon blue grass that faded into more funky greasiness to close out their final set with a bang. I’d be hard pressed to find anyone who saw String Cheese say that they weren’t joyfully transported in some way through listening.
After that it was time for some Lettuce, who absolutely killed it. Their energy was explosive and harkened back to the roots of funk. As amazing as Lettuce was, we left a little early to get a great spot for STS9. I wondered out loud why getting a deep spot was so important seeing as they were only slated to play for an hour and a half. My old college buddy Josh (and diehard Tribe fan) turned to me and said, “I should slap you right now, you have to remind yourself again what they’re doing up there. They’re making electronic music using hardly any of the tech used today to make electronic music. Of course they’re stamina isn’t gonna be limitless.” And he was right. When Tribe took the stage there was a total energy shift. The crowd had no idea what was about to hit them. And then STS9 proceeded to unload a spectacular set that had everyone dancing, some people’s jaws open, and me wondering ‘how do they do that.’ 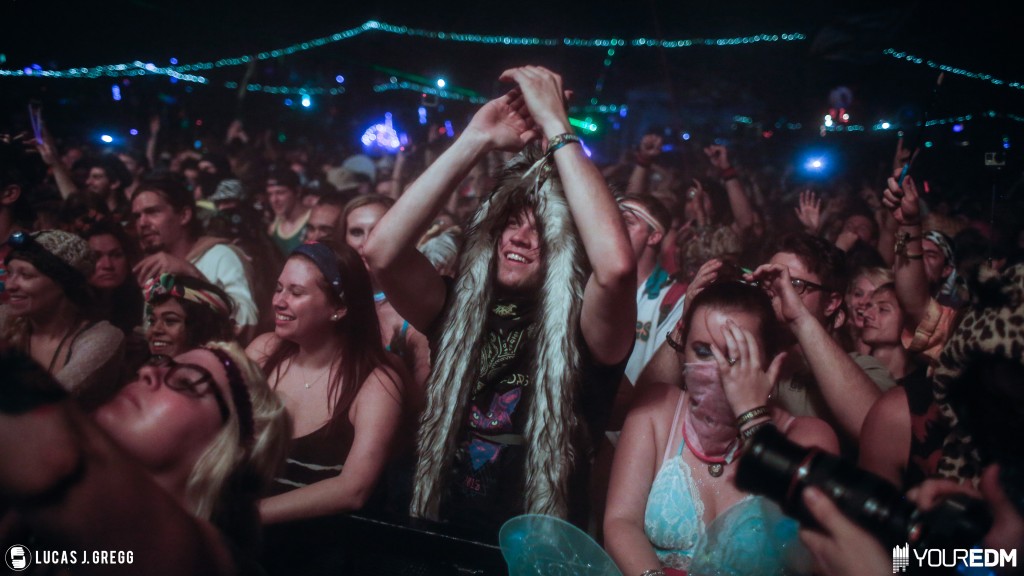 As Tribe ended and the festival drew to a close, the partying continued late into the night on the campgrounds. Many larger patches of land previously empty (including a playground) were turned into post-festival hot spots. Festival goers continued to play music from the artists they’d come to see and continued to share their epic experiences with everyone around. 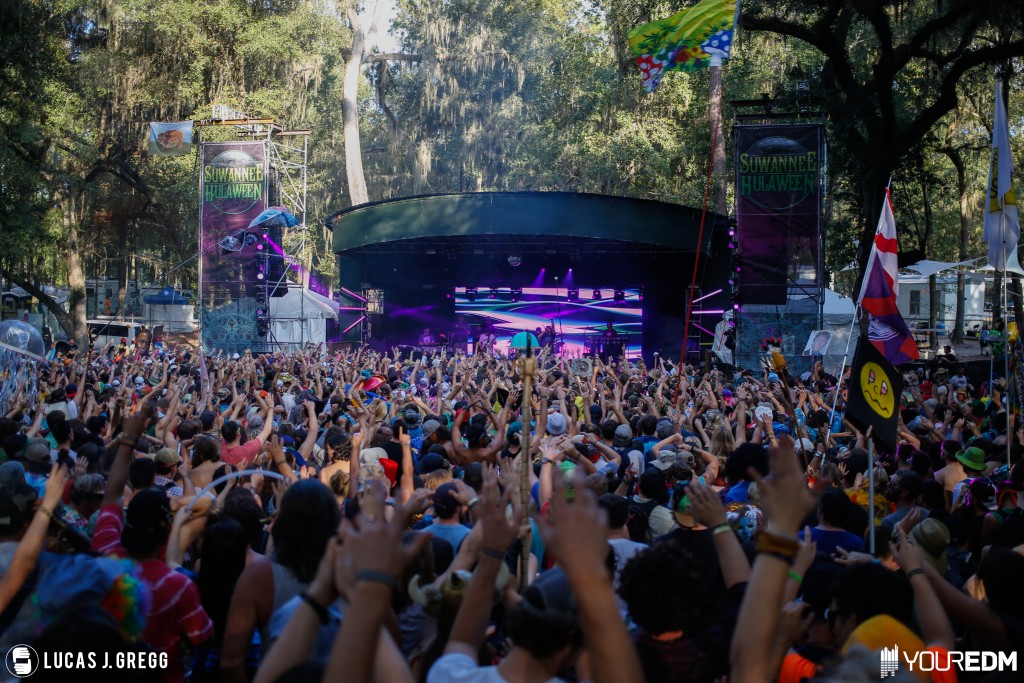