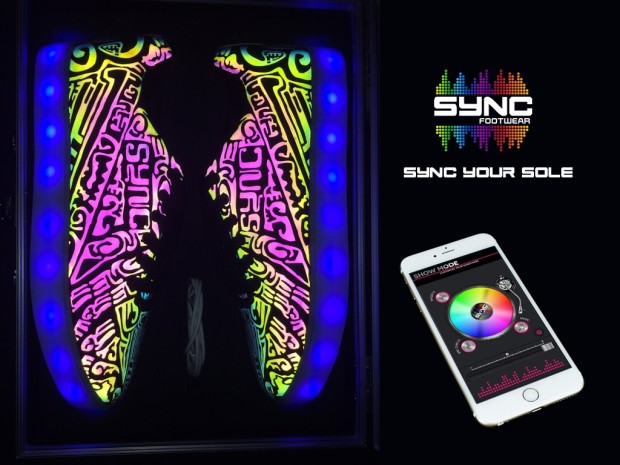 Much like the advent of the wildly popular “hoverboard” (We still don’t have a proper name for it? Seriously?), LED light up shoes became a craze in 2015. Many companies designed their own styles around existing shoes, and many others on YouTube offered up tutorials on how to do it yourself.

Of all these styles, it mostly boiled down to a single color at a time, or a rotating selection of colors. (One creator on YouTube managed to install a weight sensor in the heel so it activated every time you stepped down, which was pretty cool.) However, nothing has given you full control over the LED like Sync Footwear is attempting.

Most shoes that I found online have a switch on the inside of the shoe near the tongue that controls the color and on/off state of the shoes. For Sync Footwear, everything is controlled via a convenient app on your phone. It has a variety of settings including solid colors and various presets that allow you to control how fast, what color, and what style of lights the shoes are presenting.

“I had always noticed those crazy kid shoes with lights and thought why can’t I have a pair. So after the App, Circuit board, LED and Bluetooth technology caught up with my idea, Sync Footwear was created. Now I have my own LED shoes except these will Sync the LEDs to your phone’s music playlist or pull from the phone’s mic and Sync the LEDs to live music.” – David Panettiere

My favorite features, though, are the music-reactive ones. The shoes feature two settings involving music: the first allows you to play music through your phone, and the shoes will react to the beat; this is the easiest and clearest setting for the shoes to react to since the music is being played straight through your phone and doesn’t require the shoes to “hear” anything. The second is a reactive setting to the music around you, and will use your phone’s microphone to pick up on audio. It will react to a person’s voice, as well as the beats in the club – the intensity of the lights on the shoes is affected by the volume of the sounds in your surroundings.

Sync Footwear set up an Indiegogo for their product nine days ago, and they’ve only been able to raise $244 of their $1000 “flexible” goal as of time of publication. (We’ll chalk this up to insufficient marketing and exposure.) Unfortunately, this could also be due to the price point – Sync Footwear is currently offering perks for Indiegogo at a minimum of $210 for their basic shoe model, which is still apparently a full sixty dollars off normal retail price (bringing the real total up to $270). There are still 17 days remaining in their Indiegogo campaign, so you’ve got time to mull it over.

So if you’re in a position where you feel comfortable dropping some coin, Sync Footwear is probably the best tech out there for lightup shoes at the moment. Whether it’s the best bang for your buck is a different story entirely.