YouTube channel TheSoundYouNeed has developed from online music curators into a full-fledged brand complete with curated compilations and parties across mainland Europe, and now they’re looking to expand even further with their biggest party yet – TheSoundYouNeed Festival – Malta which will take place from August 26 to 29.

While the full lineup has yet to be revealed, some of the standout artists you can expect to see include Hudson Mohawke, Maribou State, FKJ, Sam Gellaitry, Bondax, Slow Magic, STWO, TÂCHES, Durante, and much more – all of whom have been featured on TSYN’s YouTube channel in the past.

If you’re asking yourself “why Malta,” much like I was before I read the press release, you’ll be surprised to know that golden sand, red sand, blue lagoons, medieval dungeons and Calypso’s Cave in the heart of the Mediterranean make Malta the perfect host for the festivities.

Early bird lineups are available Thursday, March 3rd at 8AM EST for £79/€100. For more info check on the official site here. 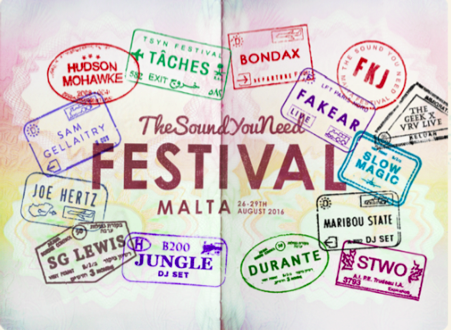