As a music producer, I understand the deep importance and sacredness of a reliable plug-in. Everyone I’ve spoken to has the one that they turn to in their darkest hour; one that they know how to navigate and utilize most fluidly for their productions. While some may find the specific capabilities and timbres of VSTs like Massive or Sylenth to be the most appealing, my ol’ faithful has always been Kontakt. Its endless banks of crisp, live instruments and boatloads of independent add-ons like Geosonics make the experience of finding natural sounds both easy and open to creativity. The plug-in even has a built-in sampler for use with any outside audio that can be imported and played with. Even though I tend to use Kontakt mainly for its instrument samples, the company has a known standard that all outside creators meet before publishing their own content through them. This is why I was thrilled when organization Wide Blue Sound offered me a trial of their brand new synthesizer, ECLIPSE. Knowing that it would look and feel fantastic before even downloading it, I was excited to explore what they referred to as a “dark, intense and aggressive musical sound design” experience.

Right out of the gate, the first thing I noticed when opening ECLIPSE was its unique and interesting visual layout. The main “Engine” tab is comprised of four independent waveforms, each with an image of a moon – at different waxing stages – above them. 250 full presets can be loaded via a dropdown menu, setting the stage for later customization and fine tuning. The four play in a looped sequence by default, and can be turned off to focus on only one or two sounds instead. Each waveform can be manipulated with its own Gain, Tune, Filter Cutoff, and Resonance knobs, and can be EQ’d according to the basic types of passes. Three modes can also be cycled through, which include Pulse (tonal pulses), Chop (a stuttery sequence), and Flow (pads and fluid textures). The entire master channel can be customized as well, with Rate, Depth, Punch, Attack and Release knobs to control the final output. Finally, waveforms can be cloned or randomized for further creative liberty. 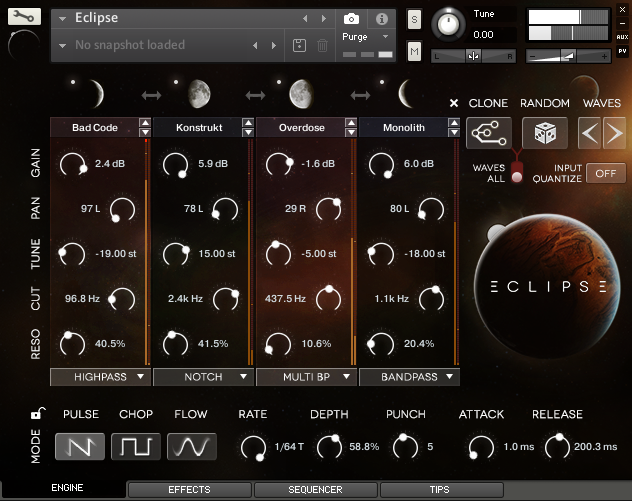 The next tab is “Effects.” In this section, basic effects like Chorus, Delay, Distort and Warmth are matched alongside interesting, custom ones like Convolve, Scream and more. Each of these effects can be turned on or off, and apply to every waveform from what I can tell. Having these effects native to the plug-in allows for even greater control when fine tuning your sounds, as you can get them almost perfectly mixed before you even step back into your DAW. 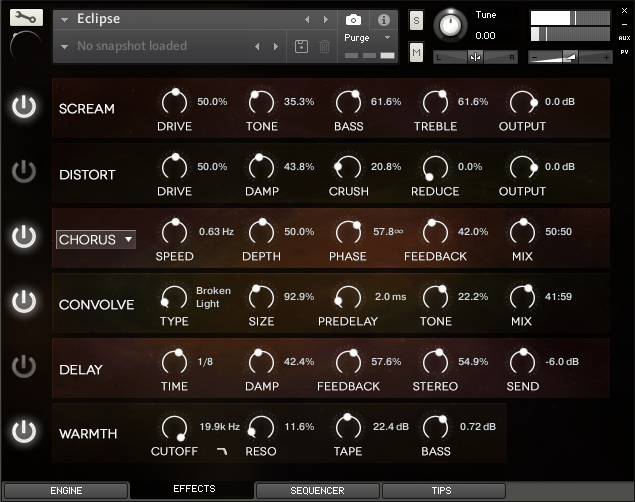 Finally, the “Sequencer” tab provides four independent step sequences that apply to each waveform. By choosing the amount of steps and rate for each of them, you can draw in the exact kind of sequences that you’d like your sounds to pass through. The sequencing can be applied to an enormous host of knobs and mixing channels, making the customization extremely extensive. The drawings can be natively saved and reapplied later on; a very handy aspect for later productions. 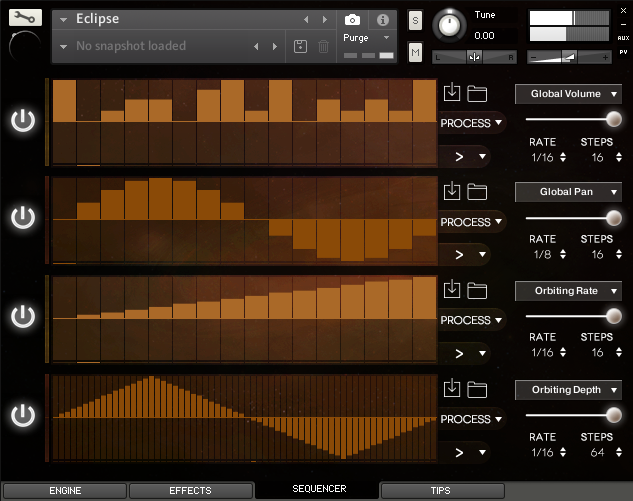 “Tips” also helps users by displaying keyboard shortcuts for each of the previously mentioned tabs, a nice feature that I hadn’t seen in any other Kontakt instruments prior to this review.

The ECLIPSE synthesizer, as a whole, is a very dark collection of sounds. Contrary to its cousin VST, ORBIT, the general feeling behind almost all of the presets is one of intensity and grainy distortion. With the right amount of tuning and creativity, it can be used as a very powerful tool in forming both strong leads and unique atmospheric elements. The amount of freedom and capability that ECLIPSE gives the user is unrivaled by most plug-ins I’ve run into, and although the in-depth processing functions have been simplified to make the experience more fluid and quick, it makes up for it with a truly incredible bank of sounds. After messing around with a few knobs and sequencers and hitting a note, a spectrum-wide onslaught of rich, layered sounds pulsates in waves across the sonic space. The learning curve is gradual and approachable, allowing users to walk away with beautiful and haunting sounds all their own in a matter of minutes.

To order ECLIPSE for yourself, visit Wide Blue Sound’s official website here. If you have previously purchased ORBIT, the new synth will also come at a discounted price during the product’s current launch sale (ending Friday evening)!

Below, you’ll find pre-made tracks that are constructed almost entirely from sounds made through ECLIPSE – minus the percussion. To get a feel for the raw timbres and unique capabilities of the instrument, do some exploring!