With events like The Flying Dutch and Tomorrowland Brasil right around the corner, the annual rumors of a potential Swedish House Mafia reunion have begun to circulate faster than ever. With all three of the group’s original members set to perform at several of the same events, old school SHM fans are on the edge of their seats for any hint of a reunion. But so far, no concrete evidence has been uncovered.

This morning, however, a curious interaction was made via the group’s official email. In promotion of Alesso‘s newest original, “I Wanna Know,” SHM sent out a message to listeners revealing the track’s artwork. 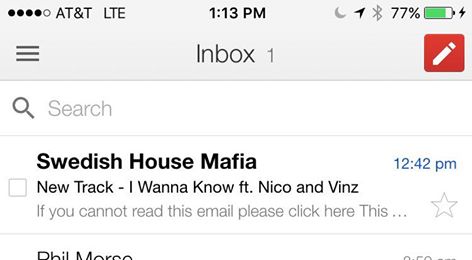 The song in question was also made available on Spotify, where it can now be streamed in full. The track comes as a warm and optimistic, vocal-centered house rhythm that features tight guitar licks and a pounding percussion section.

Even though Swedish House Mafia’s decision to use their official email most likely has something to do with April Fool’s Day, we’re happy to see them poke their collective heads out of obscurity for a moment. Listen to Alesso’s track below.