Former Hakkasan Chairman Under Investigation For Alleged Embezzlement Of Billions

In a comprehensive report issued earlier this month by The Wall Street Journal, Khadem Al Qubaisi, the now-former chairman of global restaurant and nightclub chain Hakkasan, has been found to be one of many subjects of an extensive, multinational investigation into the alleged embezzlement of billions of dollars through offshore shell companies which he helped to create. At the time of writing, four separate investigations are being carried out by the United Arab Emirates, Switzerland, Luxembourg and a group led by Malaysia and the United States, each focusing on specific players and transactions involved in the startlingly complex case.

One towering, Malaysian government investment fund founded by the country’s Prime Minister Najib Razar, 1Malaysia Development Bhd. (1MDB), sits at the center of the controversy. Corporations and other entities invest in government funds like 1MDB based on their specific reputation, goals, risks, fees and other factors, according to Investopedia. Using such funds often results in lower investment fees, greater management expertise and a wider range of opportunities. Rather than decide what the fund will do with their assets, however, investors simply retain ownership of their individual shares while allowing the fund’s manager to take full control over where and how their money is utilized.

In 1MDB’s case, the subject of the investigations stems from $3.5 billion in bond sales made by the fund in 2012 that have since “gone missing,” according to the WSJ.

Current investigations from the UAE are specifically directed toward the actions of Qubaisi and Mohammed Badawy Al Husseiny, each of whom are in charge of separate investment funds owned by and with “close connections” to 1MDB, the WSJ reported. In addition to his former role as chairman of Hakkasan, Qubaisi is the managing director of the International Petroleum Investment Company (IPIC), an $80 billion fund based in the UAE’s capital city of Abu Dhabi. Husseiny is the chief executive at Aabar Investments PJS (Aabar), which is owned by IPIC. The UAE has issued travel bans and frozen the two men’s assets as the investigation continues. 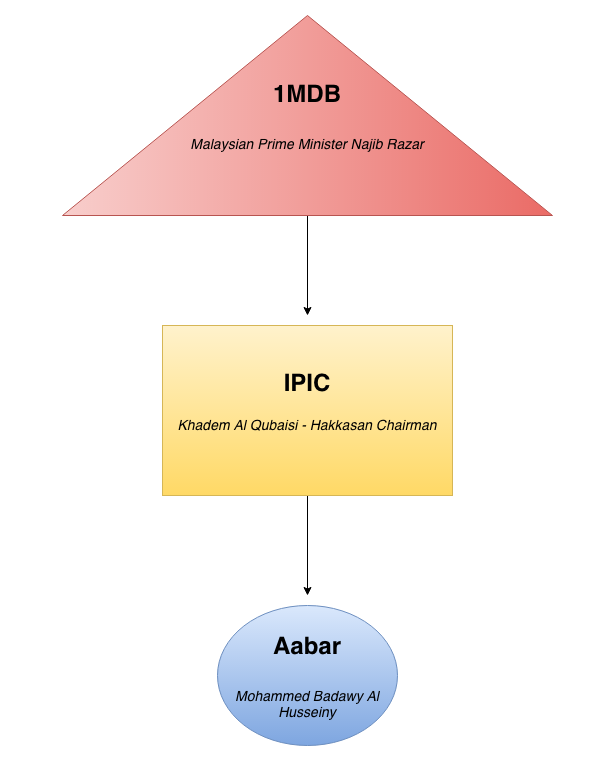 Meanwhile, a Luxembourg prosecutor has said that they have aligned with the local unit of private bank Edmond de Rothschild Group to focus their combined efforts on a specific series of transactions made by 1MDB in 2012.

In 2012, 1MDB sold two bonds for $1.75 billion each in order to fund the purchase of power plants in Malaysia, the fund said. These bonds were guaranteed by the IPIC, Qubaisi’s subsidiary fund. This guarantee acted as security against 1MDB’s potential inability to fulfill its obligation to pay back. 1MDB said that it then payed $1.4 billion to Aabar in collateral for IPIC’s guarantee. An additional $1 billion was later sent to Aabar in order to neutralize any potential liabilities incurred from the initial transaction, bringing the total amount of money transferred from 1MDB to Aabar to $2.4 billion, the parent fund said.

But according to investigators in Abu Dhabi, this $2.4 billion never actually reached Aabar. Instead, they said, it was transferred to an almost identically named offshore company in the British Virgin Isles called Aabar Investments PJS Ltd. This company, investigators said, was created by Qubaisi and Husseiny. Thus, the UAE investigation efforts are now directed toward discovering whether or not Qubaisi and Husseiny used this offshore company to circulate portions of the “missing” $2.4 billion to companies and accounts around the world. 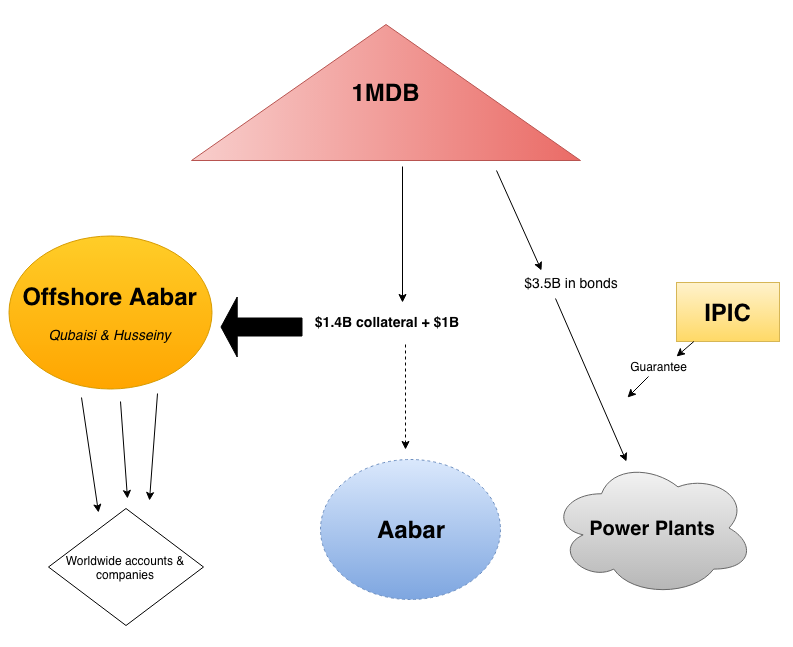 The efforts led by investigators and prosecutors in the UAE and Luxembourg are only a fraction of the investigations currently circulating Malaysian Prime Minister Najib’s 1MDB fund. Since its founding in 2009, 1MDB has experienced a catastrophic accumulation of $11 billion in debt. Despite the company’s less than fragile state, however, Najib is currently under investigation for the alleged transfer of more than $1 billion from the fund into his personal bank accounts, according to authorities from the US, Malaysia and at least six other nations.

According to the WSJ, portions of the money were spent on Najib’s particularly close national election in 2013, as well as luxurious personal items. The exact source of the money, investigators said, has not been revealed. However, it is said to have moved through various companies and government agencies heavily involved with Najib’s own 1MDB fund.

1MDB has claimed that it took no part in donating to Najib’s campaign, and Najib was cleared of all wrongdoing by Malaysia’s attorney general.

Recently, both Qubaisi and Husseiny have been replaced in their positions and have had their names quietly removed from Bahrain’s First Energy Bank’s list of board members. Qubaisi has also resigned from his position as director of Tasameem Real Estate Co. LLC, the UAE Prime Minister and IPIC chairman’s personal investment company, as well as his position as chairman of Hakkasan.

There is no suggestion or allegation that Hakkasan itself is or was involved in any illegal activity.

Still graphics created by Your EDM