Chris Lake Just Wants Everyone To Be More Tolerant

It’s pretty well documented that once something hits the internet, even if it gets deleted immediately, there’s a pretty decent chance that it will be there forever. The latest case in point is this post from Chris Lake a couple years ago that has for some reason resurfaced today on Facebook.

Lake’s main point of contention is how there is an apparent lack of tolerance “amongst DJ’s and fans for each genre.” To his credit, we’ve written about such a thing before in an editorial titled ‘Elitism In EDM.’

In Lake’s eyes, too many people are fighting about whose genre is better, or, the opposite, which genre is worse. He finishes off his short rant with the sentence, “Maybe it’s all because deep down, we each think our musical taste is the right choice, and everyone else is wrong?”

The amount of parallels that could be drawn from this statement to a myriad of other ideologies is staggering and something not for this conversation, but he hits on a strong point. It’s something that dance music fans are often unaware of in other genres because our own interest in EDM is so fulfilling and engrossing; many dance music fans listen exclusively to dance music. However, the same issues can be found within fans of glam metal vs hair metal vs black metal and so on and so forth. Each genre at the top of the totem has a dozen other genres beneath it, each with its own bickering fanbase.

Now, criticism is welcome and healthy in the right context. Chris Lake, on the other hand, is speaking about malicious criticism that only intends to put other genres down. Nicky Romero spoke about much the same thing in our recent interview with him.

The point is to live and let live. As another commenter on Facebook wrote (whom I unfortunately cannot remember the identity of), it can be as easy as changing your vocabulary. “This sucks” becomes “I don’t like this,” and the problem basically solves itself. 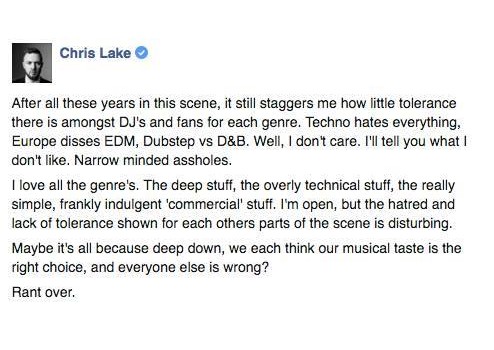