This year marks the very first time that public consumers will gain personal access to state of the art, virtual reality headsets. With over 200,000 independent developers and thousands of start-up companies currently in the process of creating new applications, games, and other web-integrated content for the various devices, the possibilities are beginning to open up for the average user to connect themselves to media in entirely new ways.

In addition to the most obvious applications for such technology, like education, gaming and therapy, the music business is starting to integrate themselves into the market with never-before-imagine methods for fans to connect with one another and artists alike.

Last month at the Game Developers Conference in San Francisco, Austin-based virtual reality team paired up with DJ/producer Grimecraft to debut TheWave, a completely novel way for creators to perform their work and listeners to experience the live show circuit alike.

“Forget everything you know about live music. Now imagine a new way of creating and performing music using VR. Imagine it’s so easy that anyone, regardless of skill, can be a virtual reality artist. What if you could perform live in a virtual venue that is listening to each note you play, and reacting visually for you and the audience? What would a bass drum feel like? What would it look like? And what happens when the bass drops…” – Grimecraft

The experience of using TheWave can be broken down into two distinct areas.

For the performer, albeit in a colorful virtual atmosphere, the standard DJing tools are basically the same. In the video player above, Grimecraft can be seen manipulating the space around as if he were standing on the decks at a normal club. Two mixers are facing him, and a simple EQ and filter system sit nearby. Using the HTC Vibe’s hand-gripped control devices and the helmet, Grimecraft is able to mimic his behavior as he would behind a normal controller. 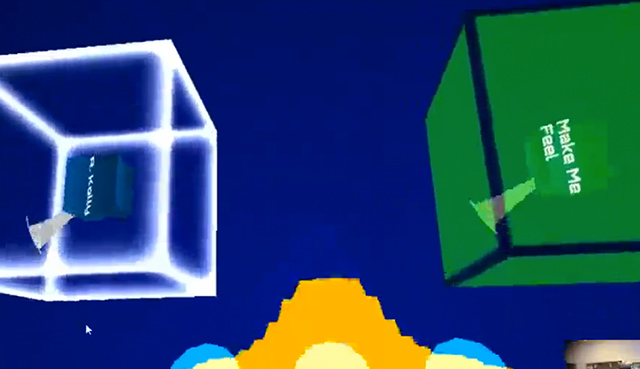 The audience’s capabilities are a bit more interesting. For fans around the world who may not receive the chance to witness their favorite DJs or musicians perform live, the concept behind watching them within the virtual space becomes an extremely appealing one. The idea for this new technology would be to recreate the live show experience as accurately as possible without sacrificing the inherent energy and vibe that one might enjoy in person.

Despite the tech existing only in its beginning stages at the moment, developers hope to one day allow fans to tune in to the live set all at once, where they can proceed to move around, interact with other attendees and even approach the DJ booth. In the video above, the front of the booth can be seen housing a virtual Grimecraft while incredible, neon lights and visuals swirl around the space.

Your EDM Premiere: Major Lazer – Be Together (Wildfire Remix)