The internet is a really strange place. Content gets recycled and dug up continuously year after year and, if it’s good, no one really cares because there’s a good chance that someone didn’t see it. Case in point, this post on Reddit showing Dillon Francis’s tour rider which actually leaked back in 2012.

Looking at it now though, you wouldn’t blink twice. 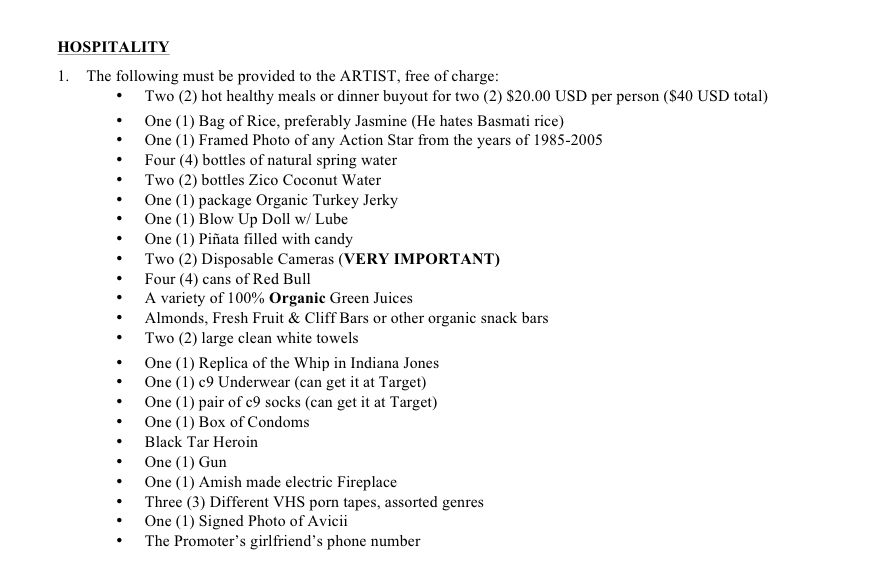 This is vintage Dillon Francis, through and through. While there are typical items like fresh fruit, clean towels, coconut water and the like, there are still very Dillon Francis-esque items on the list. For instance… “One (1) Blow UP Doll w/ Lube.” On its own, this wouldn’t really be notable – a lot of artists like to mess around on their riders knowing that some items will simply never be fulfilled.

However, he keeps going. The list denotes black tar heroin, a gun, an “Amish made electric Fireplace” (an actual oxymoron), a signed photo of Avicii, and in a particularly hilarious request, “the promoter’s girlfriend’s phone number.”

Honestly, we’re not sure exactly how much this list has even changed in the past four years. It’s possible that he requires an extra phone battery (charged) now considering how much he’s on Snapchat. Perhaps he likes a different brand of coconut water. But either way, Dillon Francis is still our favorite class clown for a reason.