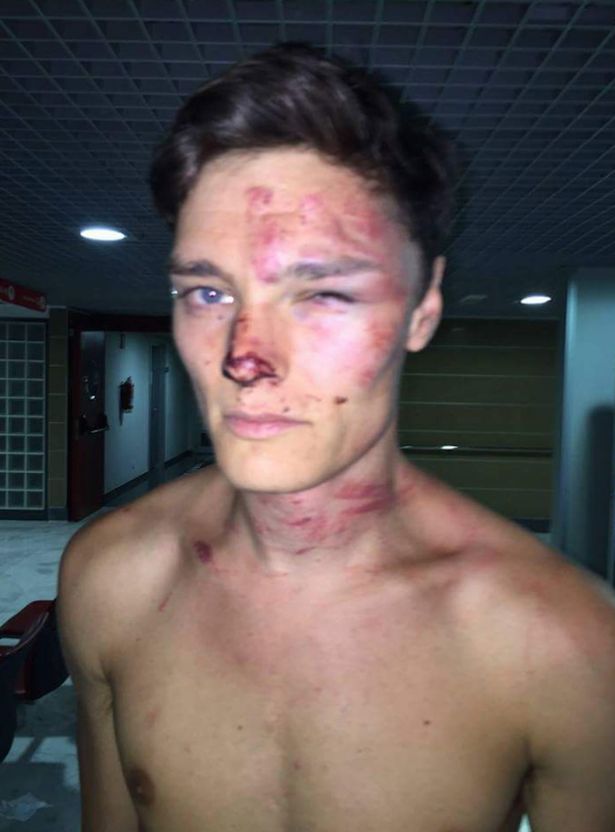 A British couple on vacation, DJ Alex Henderson and girlfriend Robbie Hofmann, were subject to a vicious assault by the hotel security staff of four star BH Mallorca in Mallorca, Spain last week.

The incident stemmed from Robbie allegedly ‘throwing a plastic cup at the staff’ according to the staff members, before spiraling into full-blown violence. In a video shot by hotel guest, Jakub Matejko, the couple is depicted restrained on the ground by hotel security while other guests, particularly the gentleman with black swimming trunks, are aggressively chased away by security staff. It isn’t easy to watch…

Robbie and Alex have since taken to social media to share their side of the story as well as this graphic image of Alex post-beating. The couple maintain that they did nothing out of the ordinary to warrant such a response.  According to Robbie, “we were only there to DJ and watch our friends headline a UKhardcore event … We at no point behaved like disrespectful yobs which was how we were treated when apparently walking too slowly towards the exit.”

The hotel has since issued a statement reprimanding security and banning door staff from the hotel. The hotel stated that the couple were not guests of the hotel and had refused to leave the swimming pool at closing time despite repeated warnings from security. Either way it seems like a huge escalation whichever way you look at it.

The hotel’s statement is as follows:

“The management of BH are as troubled as everyone else by what is shown on the video yesterday.”

The guests were not staying at BH Mallorca, they were visiting for the day and refused to leave at closing time.

We do not condone the use of violence and we have been working with local authorities since last night to establish exactly what happened before and after what is shown on the film that lead up to this incident.

We have asked the external company who provide our security to stop these guards from working here.

The police have reports and we are providing all information they require.”

The establishment has since received thousands upon thousands of one-star reviews online.