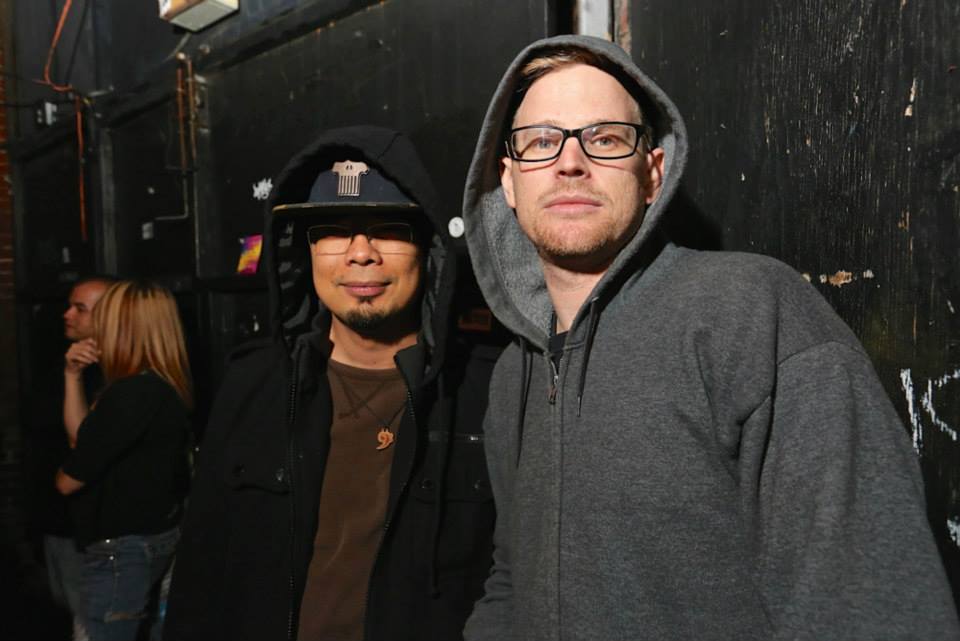 There are very few things more underground than a drum and bass duo coming straight out of Los Angeles. As they crawl out of the sweat-damped warehouses at 4:30 in the morning still itching for more 174, every junglist has a tune in their head firing back and forth like crave-worthy neurons with a thirst for bass. The tune I’m premiering today is a prime example of the aforementioned, however… we’ll get to that in a bit. First, i’d like to introduce you to someone.

Theatrix, a brand new uprising project consisting of Dip Vertigo & Damien are, to put it simply… not an act to take lightly. Their project is just beginning to lift off, but what we’ve heard from them so far is nothing short of tearout flawlessness. If the team keeps this up, they’ll be regular Ed Rush & Optical‘s rinsing out tomorrows’ Fabric(sheds hopeful tear) Although they’ve already previewed one tune entitled “Pursuit”, they’ve been kind enough to give Your EDM the premiere of their brand new remix for free download.

So, with a brand new exciting project like this, i’ll let you both have the floor first. How did this project come together, and how does that intertwine with the fabrics of your vision?

We’ve both been DJing and producing tunes for a few years and we always toyed with the idea of making tunes together.  We had a few sessions and I think it was when we started work on one of our forthcoming tunes that we came up with the idea to run under a single name.

Seeing how both Jeremy (Dip Vertigo) and I (Damien) have backgrounds in the performing arts; Jeremy being an operatic lyric tenor and myself with a long history in acting and dancing, the name Theatrix just made sense.

We are drum and bass.  It’s what we eat, breathe, and dream.  This doesn’t mean that we aren’t going to try new things but this music is in our blood; no matter what happens, it’ll always be there.

If you had to name 3 influences in your productions, who would they be?

Wil:  DYLAN, DYLAN, DYLAN! Just kidding.  Top three influences is a tough one because we rate so many. From personal experiences, I think I’ve learned the most from Prolix, Gridlok, and Phetsta, so you could say they have influenced me the most.  Outside dnb, top three influences would be Dave Pensado for mixing, Ben Burtt for sound design, and probably Royal Crown Revue for musical influence.

Jeremy: I’d have to say Calyx & Teebee, Sub Focus, and Ed Rush & Optical would have to be my biggest production influences.

Venture off with us a bit and share with us the studio process. Are there any in-house rituals you both perform before getting together?

Depends on the day, really. On new tune day, it usually starts with listening to tunes, laying down basic sounds, and trying to catch a vibe. On editing days, i’ll usually start by listening to reference tunes or creating a checklist from A and R notes. Mix days is up and at em first thing in the morning so we can get it in before ear fatigue has started to set in.

The actual studio process usually consists of one of us nerding out and tweaking parameters or adjusting music while the other one is throwing ideas out or taking a break. We’ll do that until we get tired of it and then the other takes over.

On a lighter note, tell us about your debut performance coming up!

Yeah! We’re debuting Theatrix on Saturday, October 1st at Timeless at The Complex in Glendale, CA, just a few minutes north of LA. We’re playing support to the jump up legend, Rawtee who will be going back to back with Xcellerated boss-man, DJ Construct. It’s a pretty stacked lineup from start to finish, filled with local favorites, and should be a great time! We’re pretty excited to play!!

Are there any new producers that you guys are into lately? Any specific songs fans can check out?

Are there any releases coming up that new fans can look forward to hearing from you guys in the near future?

We’ve got a 12 inch coming on Subsonik Sound Recordings which is a neuro vocal banger with Siege MC out of Bristol. It’s backed by a melodic, trance inspired, dance-floor smasher that we did with fellow Database member, Wraith out of Los Angeles. We also have a compilation signing which is due out on Formation Records due sometime in the Autumn. No specific release dates as of yet but it shouldn’t be too long before those drop. We also have a ton of projects on the verge of completion including a liquid roller and some genre bending business so expect a decent amount of output from us for the foreseeable future.

We also have a free tune to give away to the Your EDM readers.  It’s a remix we did of Manifest’s – OG Returns that we recently did for the competition. SKRU ended up taking it (and well deserved too) but we still like what we did so we thought we’d give it out as a freebee instead of just letting it sit on our hard drives for perpetuity.  We tried to capture a classic vibe with modern aesthetics while really challenging ourselves in extrapolating as many variations on the theme as we could fit.  We’re definitely pleased with the result!

Lastly, anything you’d like to say to your new fans at Your EDM?

Jeremy and I are pretty stoked on this new venture and we’re excited to finally be able to share this all with you. Follow us at these social links and feel free to shoot us a line if you’re feeling brave.  🙂