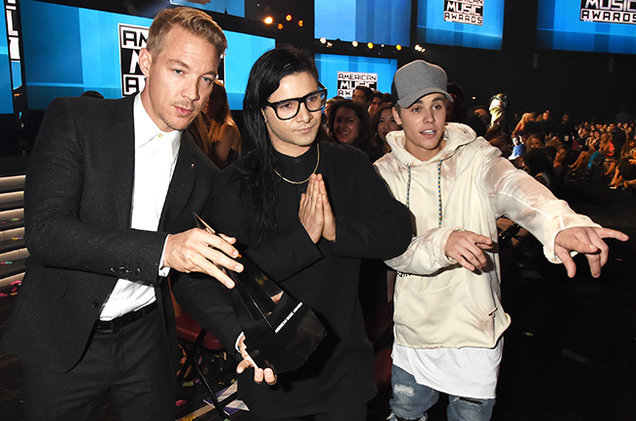 Diplo Explains Why He Wanted To Collab With Justin Bieber

Ever since the Diplo and Skrillex supergroup Jack Ü became closely associated with Justin Bieber, the trio has been shrouded in a veil of controversy. Despite us having passed the pinnacle of condemnation and confusion, many in the EDM community continue to scratch their heads at Bieber’s now-prolific presence in the market. By combing the worlds of dance music and mainstream pop, not to mention Skrillex’s production on Bieber’s own album, he and Diplo inspired a new generation of crossover work between artists from both realms.

In a recent interview with FADER, Diplo elaborated on his initial decision to work with Bieber, saying that it mostly came from the effect it would have on their fanbases.

“Justin had kinda hit rock bottom with things, like from the press, from jail, and from, like, taking his pants down at an awards show or something. I wasn’t even paying attention, but I know that he wasn’t very cool. And I was trying to really help Skrillex rebrand his own project, too. If nothing else, I thought working with Bieber would be the most noticeable thing we could do. It would be a great record, and it would make everyone really fucked up. It would make them really disappointed in themselves, and really confused, like, ‘How do I like this record?'”

By acknowledging Bieber’s less than sparkling reputation at the time, Diplo saw the situation as an opportunity to both create a media buzz and defy listeners’ expectations. He wanted to take someone that the world looked down on and transform him back into a celebrated contributor to music.

“Even from day one, as I started to develop, I saw people’s perceptions of me as a producer, and they always want to put me in one box or another. Maybe that’s why I’m a target for things because I don’t belong anywhere. If I make a record that makes people think that Justin Bieber is cool and makes them dance to it—which seems to be one of the most daunting tasks ever—then maybe people will rethink the way they think about music, you know? It’s not so dry and clear, what’s cool and what isn’t. Good music is going to be good music. He’s somebody you don’t want to like, but you like it.”

To read the full interview with Diplo, click here.