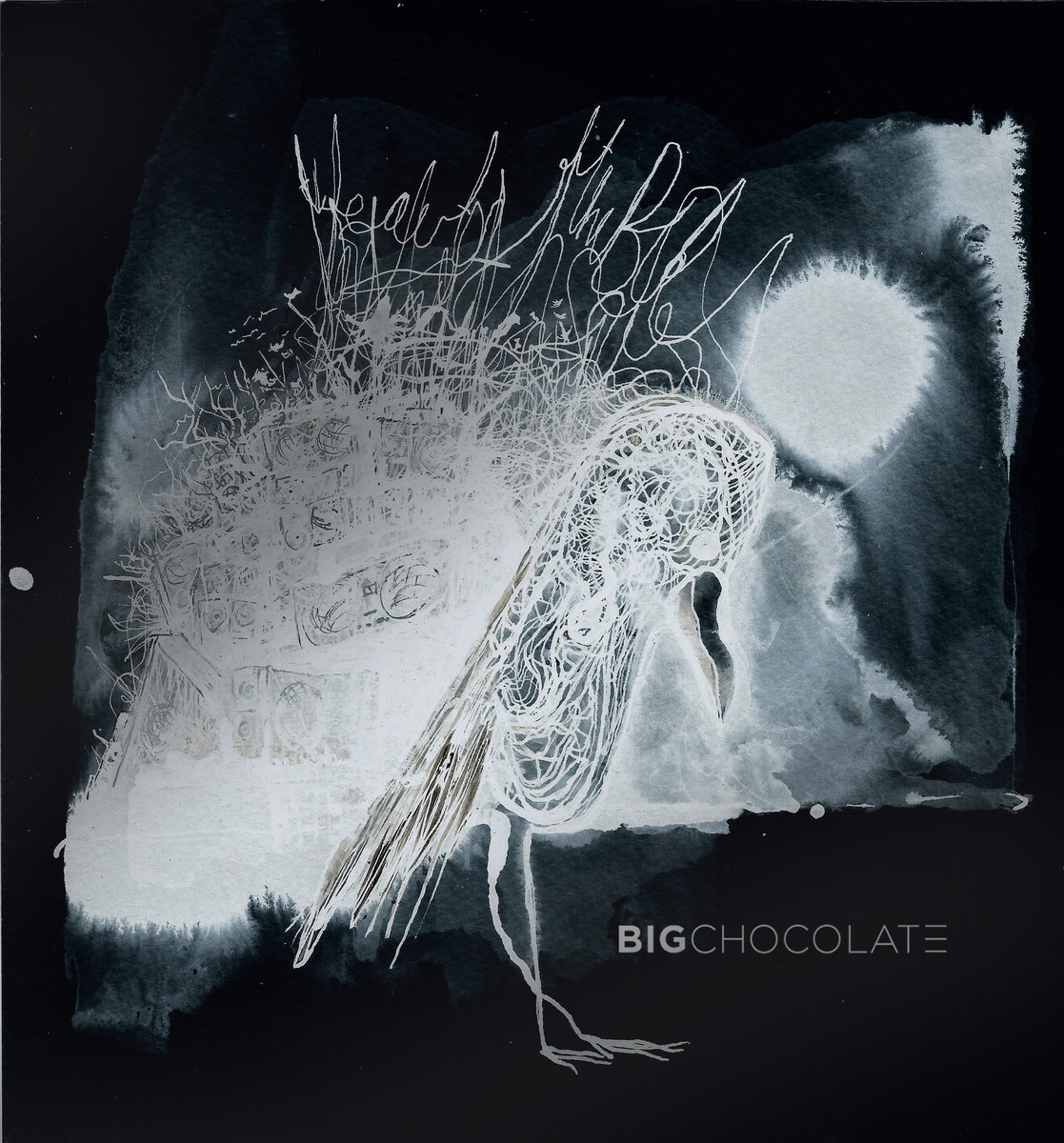 It’s no secret that Cameron Argon, better known as Big Chocolate, stays hard at work. Between his eclectic electronic productions and his involvement in various metal projects over the years, the dude is a human dynamo.

This combination of energy, inspiration, and talent culminates on his latest album, The Beauty of the Bird. Spanning nine tracks of all-original creation, Big Chocolate fearlessly explores the darker side of his ever-evolving sound. The release is simultaneously conceptual and undeniably immersive, an easy-listening art piece. Lovers of dubstep, riddim, and other low-end heavy genres seeking something outside the box will truly appreciate the ‘post-EDM’ approach on display here. These sounds are familiar, yet new all the same. Check out the full stream of the album after the jump to see what we mean; we were also lucky enough to snag an interview with the man himself, so be sure to peep that as well!

Tell me a little about your origin story; what kicked off your musical career?

I always loved music growing up in Huntington Beach, CA. Parents had a good collection and stereo, so I’ve been  jamming in living rooms since Pampers. Both parents can play piano as well. I was introduced to more extreme, controversial, younger music probably around ten by an older cousin of mine (RIP DCW). I started playing guitar at age 12 and getting into heavy metal. My family moved to Minden, NV shortly after that, and I continued to grow my taste in music and extreme music alike, thanks to things like music cable programming and the internet.  High school was a very influential time for me. I was very focused on music and relationships that dealt with it. I played a number of instruments in a number of bands, which I usually recorded and produced demos for. I recorded and produced demos, EPs, and albums for many local bands and aspiring rappers. All the while, I continued to grow my musical taste through the ever-evolving Internet and its impact on music, especially death metal. I was a fan of many kinds of music at this time, from hip-hop, dance & electronica, oldies, big band, world, and alternative. One of the more important things that occurred during this time is the formation and online presence of death metal establishment Disfiguring The Goddess. The project started out as a full band which I played guitar in, to a collaborative production effort between me and guitarist Incommendatus, into a solo project to where it stands today. In 2010, I was introduced to Mitch Lucker from the band Suicide Silence to make the first official remix for their second album. We hit it off both personally and creatively. We were a suuuuuper good pair because we were both very visionary and also had the ability to back it up. The project was known as Commissioner. The sound was a glitched up,  ‘get off your feet’, mechanic heaviness that quickly became inspired by dubstep, as the sound was first starting to gain wider appeal. Mitch and I were both totally feeling it, listening to the likes of Datsik and Caspa & Rusko, to name a few. I was already into DJing (got a CDJ800/DJM400 setup during my senior year) and producing electronic dance music, mainly inspired by the Bloody Beetroots and their radiation of rock and roll. Mitch and I released our EP ‘What Is?’ in 2011, and I went on to produce two bass inspired dance music EP’s ‘(I’m Shot’ and ‘HiLion’) before hitting the road on the Vans Warped Tour. I would consider this to be the start of my musical career, even though I’ve been pursing music with success since 17 thanks to Youtube, Myspace, and the underground metal community. I’ve played with Abominable Putridity in Moscow a week after graduation in 2009 (doing vocals) and recorded and toured with Burning The Masses across Europe in support of the album ‘Offspring of Time’ (doing vocals and lyrics) in 2010.

What was the first piece of electronic music you can remember hearing? Did you love it or hate it?

Well, that’s pretty blurry because I kinda remember hearing about tunes like ‘I’m Blue’ and ‘Favorite Game’ around the same time…. My most distinct memory is ‘Better Off Alone’ by Alice Deejay, which was shown to me by my older cousin Dane. I remember being into trance music when I was younger too. I bought Paul Van Dyke‘s ‘In Between’ the day it came out in stores. I was amped, it sounded great. That was right around the time I was starting to drive, too, so it was a great CD to have in the car.

Where did the name ‘Big Chocolate’ come from? Did you go by anything else before taking that name?

I went by my initials CMA for a real short while before changing it to Big Chocolate. Big Chocolate is what I was listed as on my other, more metal-driven music projects. It was a producer and persona alias that I thought was spunky and different than what people were expecting out of myself and what I was doing.

How would you describe your sound to someone who had never heard your music?

An evolution of inspired, multi-genre music with fine progressions of discovery and energy that shall continue to be defined in the end as anything but Big Chocolate.

Or, usually I just say bass music; or dubstep. I’ll usually shout out the more easy-listening tunes and pieces I’ve done before, such as ‘Clean’.

What was your creative process like on Beauty of the Bird? It’s a bit deeper and darker than your previous releases, so we’re curious as to what inspired you.

The process was deeper and darker in and of itself. I was very isolated for about 2 years, fell into a bit of a spiral as I got more mental about, well, everything. This had me pretty walled up, but I got creative and productive on certain ends of my craft. Also, I  learned a hell of a lot about myself. Most of these mental things went full circle and I simply felt reborn as a boy and myself at the end of at all. ‘The BOTB’ was a positive result of a lot of the things I was feeling at the time; about music, myself, trends, and the aesthetic of what the final product really is. ‘The BOTB’ is the kick-off: it’s essentially very easy listening, and I feel comfortable and confident listening to this piece with just about anyone…. myself included. I have listened to ‘The BOTB’ way more than anything else I’ve ever created. As for inspiration, so much was personal and much of it was musical. It’s like a perfect storm of my life syncing up with what was peaking my ears and soul, and the fantasies of how I wanted to impact people sonically and take them to a mental space out of their world; subconsciously, there is a loved one in the mix too.

At the tail end of 2015, I had a great creative output; there were folders and folders of tunes and projects, all very uninspired by the scene or current sounds. I enabled myself to be detached and isolated. Coming into 2016, I ran those waves for a while longer before devoting my energy and attention less on producing and more on listening instead. I got extremely into lossless formats of newer music, as well as falling into a deep obsession with Drake’s ‘Views’. While I wasn’t a Drake fan AT ALL before listening to this album, there were so many things about it; I was with it, on every level. Noah ’40’ became a positive influence in my life at last. I found myself in a new renaissance, and felt a soulful connection to dubstep, its conceptual state, and how some producers and outfits were so dedicated to the progression, yet honor, of 140 sound system music. I started to DJ more as well. This led to a run of gigs that brought me all over the country. At the time, I was demoing new ideas (including ‘Beautiful Music It Makes’, ‘Yung Grasshopper’, and ‘Poppin Shit’) and playing (to the best of my ability) a genuine set of music that I was obsessed with, that I didn’t think anyone else in the room knew. The whole experience of getting back out there and pumping out the vibrations, feeling the flow of the room, and connecting with my fans (who are more like friends most the time) was extremely inspiring. It deeply countered my isolated state. After the run, I went back into the studio and sorta reinvented the body of work now known as ‘The BOTB’ into more of a ‘post-dubstep’ sound. Tracks like ‘Blow Your Mind’ really highlight this feeling for me. If only you could hear the demo of that track in 2015; for sure a deep night, desert floor, dreamlike banger.

Speaking of inspiration, is there anyone making waves in the scene right now you think we should know about?

Any big plans for the remainder of 2016?

All musical. I feel really awesome right now, so I’m just enjoying being myself. Going into the studio deep to flush out my feelings on my projects. Will be making club appearances in the states to start playing The Beauty Of The Bird support sets, which i’m really excited about. Unusual plans.