It’s been approximately two years since the closure of one of Toronto’s most beloved venues The Guvernment, but we’ve received confirmation that another mainstay of Toronto dance music culture will also be shutting its doors very soon.

Known informally as the ‘home of the afterparty,’ The Hoxton has hosted plenty of world renowned dance music artists in its six years of existence including The Chainsmokers, Porter Robinson, Madeon, Zeds Dead, Flosstradamus, Boys Noize, Jauz, and much more in just the last six months. It also held a special reputation within the city with the expectation that on any given weekend night anything could happen. Case in point? A spontaneous The Chainsmokers x Flosstradamus x Slushii x Keys N Krates x Shaun Frank x Grandtheft x Thugli b2b back in November.

The club is slated to host its final party on January 28th, a No Neon Party run by Hunter Siegel which has also become a treasured party of Toronto’s dance music culture at The Hoxton in the last few years.

According to co-owner of the club Richard Lambert, the decision not to renew the building’s five-year lease with promoter Embrace was a joint one. He also added out its unique placement as a “venue club” in the middle of downtown Toronto’s glitzy “bottle club” district as another reason for the club’s closure in the midst of skyrocketing rent prices.

“We were never bottle service people. We were more about music and an atmosphere, but I think that’s died a little bit. A lot of King Street clubs cater to a bottle service crowd. That’s not what we were.”

Check out a list of events that’ll happen between now and the club’s final party on the 28th below. 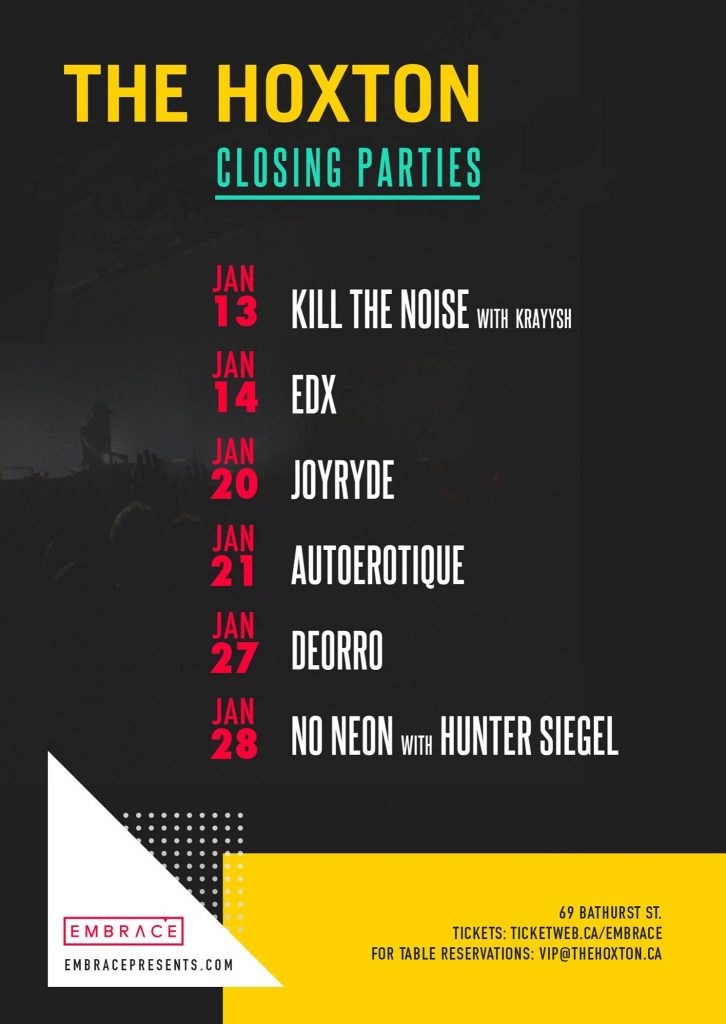