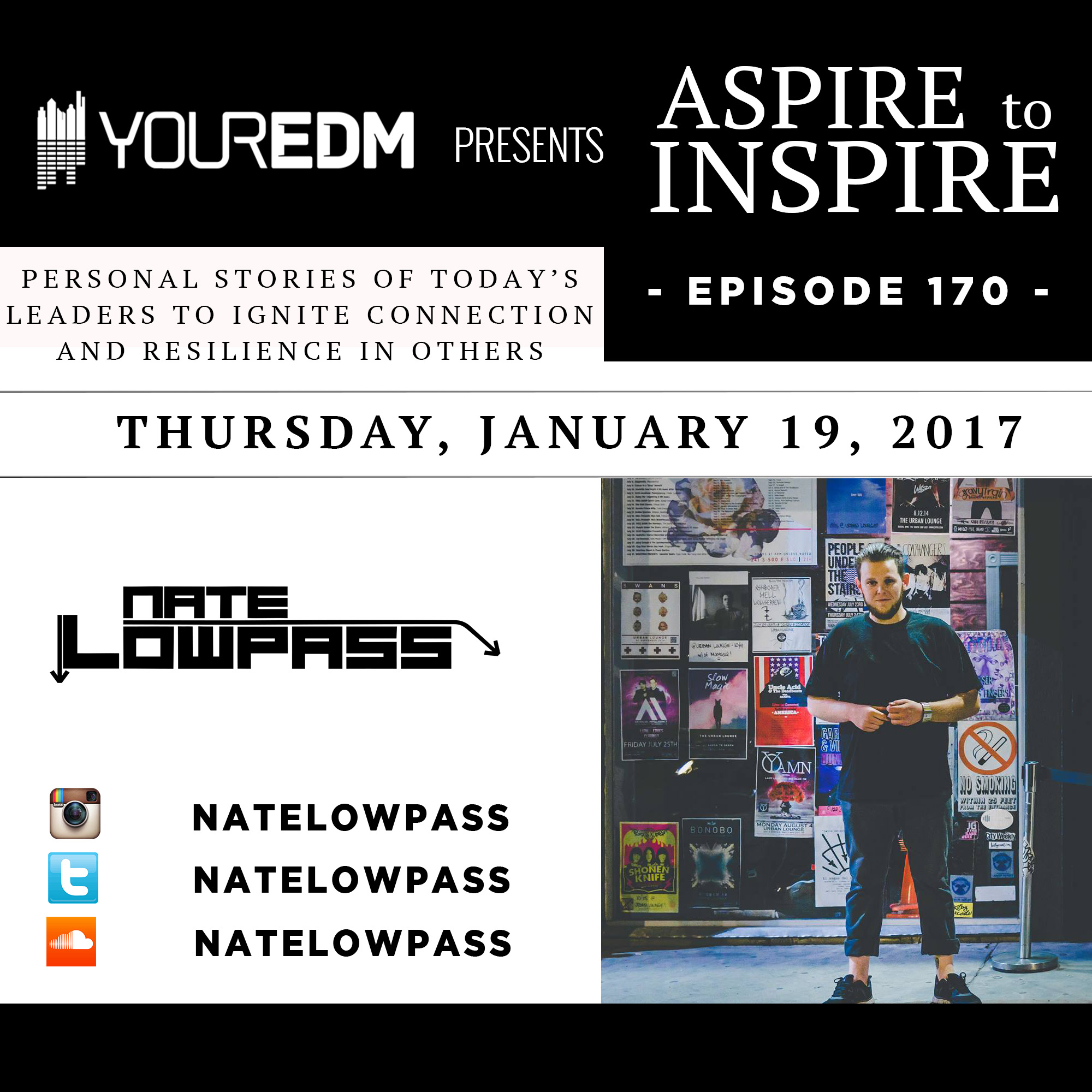 We live in such a fast-paced society that it is easy to feel defeated, like the rest of the world is pressing on without us after even the smallest of stumbles. When this happens, the feeling that we may never catch up again sets in rather quickly. Those are the moments when it is most important to look around you and take notice of those who have been in your shoes and stood back up.

A shining example of this can be found in Salt Lake City-based DJ/producer, Nate Lowpass. Nate has not only overcome his fair share of obstacles, but has shown his courage as he shares his story in hopes of inspiring others to find the light at the end of the tunnel.

Born and raised in Los Angeles, California, Nate found himself interested in music at a very young age. In the 7th grade he was in a punk band with dreams of one day becoming a big time musician. Once the rhythmic elements of electronic music took hold of him, however, things began to shift.

“Well, like many people I started going to raves near the end of high school, but at some point later on, the roommates that I was living with bought a set of turntables. I didn’t take much interest in it at first, but one night they were just practicing in their room and I was trying to figure it out. I couldn’t really tell if it was easy or difficult so I tried it. The concept of matching two records together at the same time clicked instantly and I picked it up right then and there. Two days later I bought my first stack of vinyl and it was on and cracking from there, haha.”

Although Nate whole-heartedly believes that his experiences have had a positive effect in the long run and shaped him into the person he is today, the path was not as smooth as he had hoped. Somewhere around the time Nate’s parents divorced, in his freshman year of high school, his then here-and-there drug use transitioned from partaking at parties to heavier use and eventually to a full-time dependency by the time he was 18 and getting out of school. By the age of 19, Nate found himself sleeping in cars, on friends’ couches, and eventually facing a choice that isn’t easy for anyone to make in such a vulnerable position.

“I somehow managed to hold a job for a while and had a nervous breakdown one night when I couldn’t score any of what I needed. If you were addicted to drugs like I was and you couldn’t get your fix, you were going to get sick. That’s a huge thing that you never want to deal with. I decided to call my mom in Salt Lake City and explain what was happening. I didn’t tell her everything, but I did tell her that things were completely out of control, I was in a lot of trouble, and I needed to leave. I still to this day don’t really know why I had the moment of clarity or the courage to talk about it, but literally within 24 hours I put my notice in at my job, left my girlfriend, my friends, my apartment, everything. A day later I was on a plane to Salt Lake City with a bag of records and a trash bag of clothes. That’s all I had. I had no idea what I was going to do. All I knew was I needed to leave or else I was going to die. Plain and simple. Since leaving and getting sober, I can count on more than two hands, the number of friends or people I knew growing up that passed away from this horrible thing that seemed to overtake the entire city I was living in.”

Roughly a year had elapsed before Nate began venturing out into the world again. He had attended 12-Step meetings that helped him regain control of his life in a major way, but music had remained a constant thread of his recovery. He purchased his own set of turntables, the same set he had learned on in LA, and spent countless hours in the basement practicing. Soon after that, he made his way over to the local record store where he met a number of other local artists, thus sparking his involvement in Salt Lake City’s electronic music scene.

Staying sober in clubs and at dance music events, especially in the beginning, wasn’t always the easiest obstacle to face, but Nate’s sobriety was his first priority as he built his music career. Now, over a decade later, the benefits have been monumental. In February Nate will be celebrating 10 years clean and sober.

“I have inspiring moments all the time. I’m very fortunate to be in the position that I’m in as far as DJing goes. I’ve also spent the last four or so years learning how to produce music and in the middle of last year, I signed to V2 Artist Management – a talent management company based here in SLC, which was a huge milestone for me. That was something that I had been working forever on since I started. That has allowed me the freedom to just focus on making music. I’ve DJ’d here so much that I’m fortunate enough to get booked just based on the reputation I’ve built for myself as an artist. I take great pride in what I do and I truly believe it shows when I get to do what I do in the DJ booth. As far as music is concerned, I just signed a record to a label so that’s pretty exciting for me. I have another single due out sometime late February or early March. It’s a lovey, mushy song, but it means a lot to me. Without a doubt, the most heart-driven song I’ve yet written.”

For so many, a drink or two can loosen us up for an evening, and it is totally okay. But sometimes one or two can turn to too many and it’s hard to get ourselves back on track. One thing that Nate would love for more people to take into consideration is that it isn’t always needed. As a major advocate for doing things in moderation, he hopes that more people are conscious of how they treat their bodies because of what it could lead to if it isn’t kept under control.

“You don’t always have to get drunk or high or whatever to enjoy the music. I’m not saying everyone that goes out to shows drinks in excess or uses drugs, but there are definitely people that do and I feel like sometimes you can be robbing yourself of the experience that is live music, if you’re too drunk or high to know what’s even going on. I’m sure plenty are aware of this, but I wish it were talked about more. Furthermore, I’ll always be jealous of the man who can drink like a gentleman. If I could do it, I would, BUT I can’t…so I don’t. If that were the case, I never would have lasted nearly 10 years sober in this industry. I just feel like I see, read about, hear about, and have seen firsthand, what irresponsible partying can do. It’s naïve to try and turn a blind eye to the overconsumption issue. My hat’s off to those that can party and partake without it affecting their lives in a bad way.”

For those who do unfortunately find themselves in a tough spot, Nate hopes to one day build something that will help steer them back in the right direction.

“My biggest goal is that I would like to eventually start a non-profit. It’s a wild concept, but even if I can only help one person, I’d consider it all worth it. I want to help young drug/alcohol addicted musicians and artists who have experienced anything like what I’ve experienced. People that need help to get off the streets or wherever, and into some sort of rehab or recovery program. The ultimate goal would be to then get them into a music school or an art school. You have to replace that hole in your heart. I used drugs and alcohol to fill that void, but then it was replaced with music. That’s truly been my drug of choice since I got sober. If I can help any struggling artist or musician get help and succeed, I would consider it a success in my eyes. I should also mention that I’m willing to help ANYONE who is struggling. Please feel free to reach out. You are not alone. My socials are listed at the bottom of this article. Reach out.”

In an industry that is built by the ideas of love, acceptance, and support, it is incredibly important that we continue to live by those concepts when our peers are the most in need. With less dependence on material things, our possessions, or social media posts, we could find a lot more love in the world and be a lot better off. Music can often spark that. It has for Nate, it has for us, and we hope it can for you.

If you or anyone you know is suffering from any form of substance abuse or addiction, do not hesitate to act. Taking a screening can help determine if additional help is required. Visit www.mhascreening.org to take a free, confidential, and anonymous alcohol or substance abuse screen. Visit Mental Health America to learn more about recognizing addiction symptoms and offering support before and throughout recovery. Several global online and regional recovery support communities can be found at the links below:

Please feel free to reach out to Nate for help via his socials: