by Your EDM Staff
in For the lulz, Just For Fun

Zedd has never made it a point to hide his distaste for Trump and his policies, especially the recent executive order banning immigrants from seven major Muslim countries in the middle east.

In part in response to the Muslim ban, and otherwise to raise money for a good cause, Zedd launched a collaborative fundraising concert with the ACLU called #WELCOME, with performers like Skrillex, Halsey, Macklemore and more donating their time to the cause.

Since then, Zedd still hasn’t ceased his outspoken opinions against Trump, once again igniting something in his fanbase yesterday when he referenced the spelling error in our president’s official inauguration poster, available for sale on the official White House website.

One user seemed to take particular offense, and Zedd chose to respond to this individual, referencing his $4 million mansion and German citizenship. 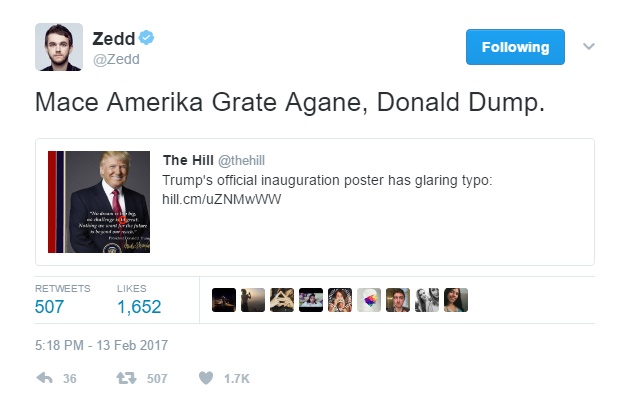 hey I'm German- I can't even vote in the US. u seem to be embarrassed that your president can't think or spell 😉

The ACLU benefit concert will go down April 3 at the Staples Center in Los Angeles.