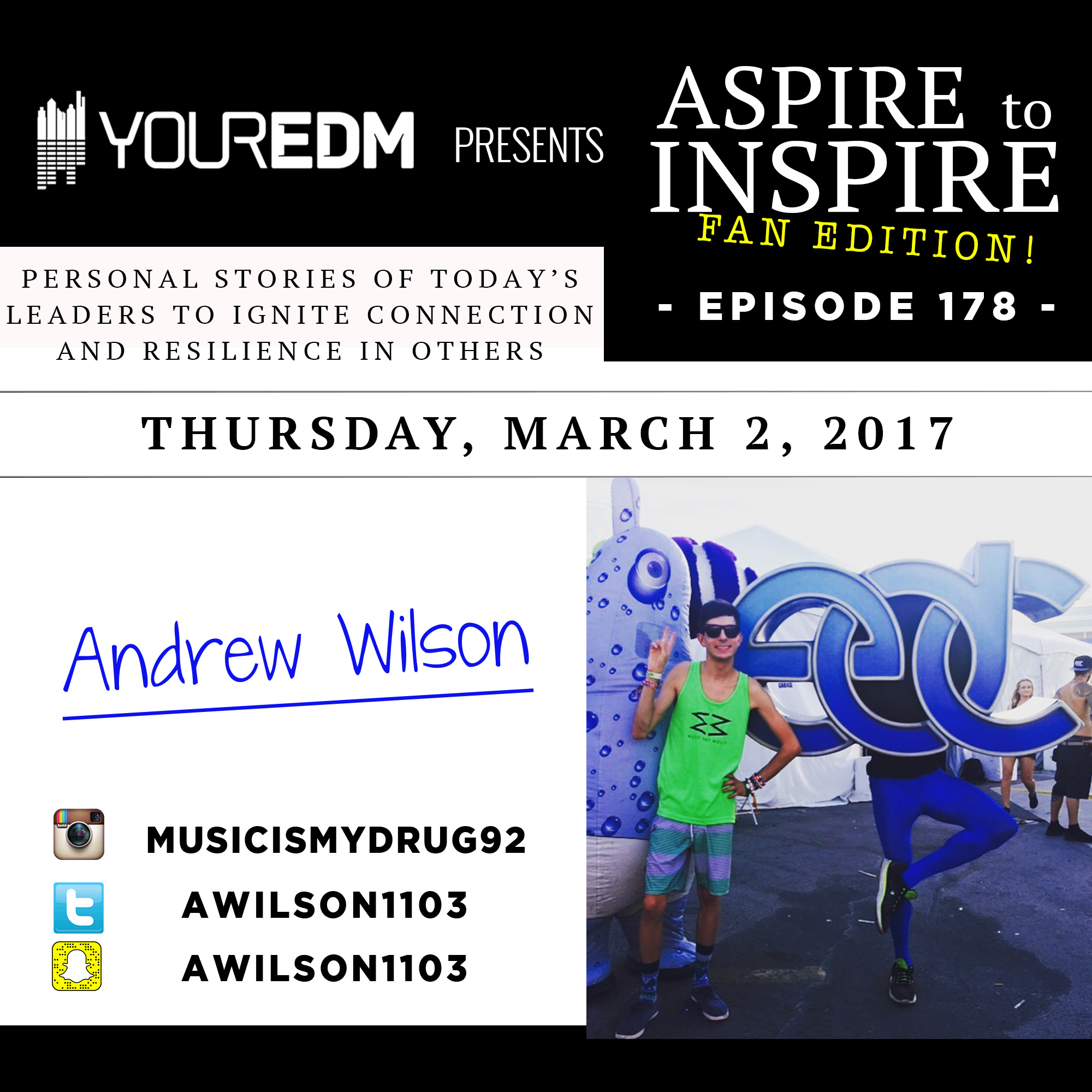 Life sometimes has a funny way of getting in the way of our expectations. As they say, “life happens.” Outside factors whether they be family oriented or not, can easily steer us off the path we had originally set out on, leaving us with an unclear grasp of what lies ahead.

For Andrew Wilson, moving around a lot had a significant effect on him and the manner in which he interacted with others. He was born in Southern California, but also lived in Texas and Arizona for a time as well. His father is a pilot for Southwest Airlines so moving from place to place wasn’t out of the ordinary. For a lot of kids that relocate frequently, it can be tough to open up and form deep connections with others when the possibility of leaving again could be just around the corner. This led to Andrew developing a rather shy personality.

That shyness seemed to dissipate, however, when music came into question.

“My first love was alternative music – bands like Paramore and Panic! At the Disco was really my scene back then. I would go to the meet and greets, be against the bar the whole time, and I was young. I was in junior high at that point. That was what started my love for music. I’ve fallen out of love with these genres a bit now unfortunately, but that was what I really enjoyed to do back in my earlier life. I was moving around a lot, which really made me shy so being able to go to these concerts made me feel happy and accepted. I was really having fun and could actually be myself even at a young age.”

Andrew’s interests soon shifted to the electronic music scene as he got a bit older and started to follow the footsteps of his older family members. When his older brother and cousins planned to attend EDC 2008 at the LA Coliseum, he jumped at the opportunity to experience something new.

“We naturally look up to the people that are older than us and I just looked up to them and wanted to do what they did. I was very intrigued. I’m not sure exactly how it came about, but the summer after my freshman year of high school they were planning to go to EDC at the Coliseum and I got a ticket to go with them. That was my first ever EDM show or rave. I felt the love and thought ‘Oh my gosh, what is this?’ That was the major transition for me. I had finally found a place where I felt so happy and so accepted. It just instantly changed my life.”

From that moment on, music became a constant in Andrew’s life. Unfortunately, he had not realized how much of a role it was playing until after he had fallen on hard times.

Change can be a lot for a young kid, especially when there is a lot of it at once. Andrew’s parents had divorced, leaving him feeling torn between them. He had moved again, which felt like he was starting all over from the beginning, and soon had to deal with the illness and eventual loss of his mother. All of this happening within a year’s time made Andrew feel as though his life had been turned upside down.

As he searched for something in the world to make him feel centered, or at the very least, a sense of normalcy, it led to legal trouble as he started to look in more dangerous places.

“All of it happened so fast and then led to legal trouble because I was searching for something bigger than myself and trying to feel accepted and noticed. I unfortunately did not find acceptance as I got into more and more trouble. I was abusing drugs and alcohol. It was probably one of the darkest chapters of my life where I was just using everybody, stealing, and just not the person that I want to be ever again. I went to shows under the influence and did a lot of things that were dangerous. I put my friends and me into situations that were unsafe as well. There were times that something really bad could have happened. That was my way of doing what I needed to do and it was just a really dark time. I am very grateful that all of this is behind me. My hope is that I can show somebody that no matter what they’re going through, as long as they keep working hard and make positive life changes, it is all going to be worth it. It will be hard, but it will be worth it in the long run.”

At the young age of 20, Andrew made the tough decision to get sober and turn his life around. It wasn’t until then that he truly realized how important music was in his life and how it provided an unrivaled amount of support and therapy for him. He tells us, laughing, that even now his friends give him a bit of a hard time at shows and events because he usually ends up shedding a few tears.

But that is what music does. It heals, but isn’t afraid to bring out our deepest emotions in the process. Artists like Above & Beyond and Kaskade have lent a hand in that process for Andrew.

“I actually have two Above & Beyond-inspired tattoos. I just feel like their music has always promoted a lot of positivity in a world that is so filled with hate. It’s easy to get sidetracked by all of that and this gave me the ability to love myself and others. I had the honor of meeting Kaskade as well last year and he is one of my idols. I know that he’s sober for I think religious reasons, but it was really cool for me to meet him and say ‘hey the first rave I ever went to when I was six months sober was one of yours on my 21st birthday.’ I was blown away and it was the best time I’ve ever had. Those are definitely people that I look up to.”

There are a lot of Andrews out there in the rave and dance music community. There are stories upon stories that involve dark times and loss, but what most of them have in common is healing. It is tough to support the case of the rave scene’s unfortunate stereotype when there are so many individuals with stories of inspiration and bravery.

By sharing his story, Andrew hopes that some of the stigma will fade and people will understand that there is so much more to it than partying. Beyond that, he wishes that his story helps others find a way out of their own dark times.

Here we leave you with Andrew’s final thoughts on the power of music.

“Music has always been something that has allowed me to connect with people that are not alive anymore. That includes my mom and unfortunately, one of my best friends Evan who passed away from drug addiction. Music has allowed me to connect and feel them with me on a deep level. I did want to share one of my favorite song lyrics from Above & Beyond’s song “Peace of Mind”…

“It will be only a matter of time, before your life comes through for you.”

Life happens but as long as you hold on and push forward you can overcome anything. Thank you so much for taking the time to interview me. Music has connected me to complete strangers, even for a moment, and allows us to forget about the problems of the world and live in peace.”

Mental Health America
To Write Love On Her Arms