There’s been previous news of an official “Shelter” remix that’s supposedly from REZZ, Slushii also actually dropped an unofficial one yesterday, but if you compare the videos from the old Madeon video we shared back in mid-April it’s clear that he’s playing out two completely different edits. So, who’s responsible for this new edit then? We think it’s Robotaki.

On the surface at least, it makes total sense. Robotaki opened all 36 shows across North America and has a close association with Madeon from the past – makes sense why Madeon would be the one playing out his edit then. If you look at his social media it’s even more obvious. He’s recently pinned a tweet with the caption “one moment” of him with Porter Robinson and Madeon, retweeted both video tweets mentioned above and has been mysteriously tweeting about the same “one moment” which is supposed to drop today. 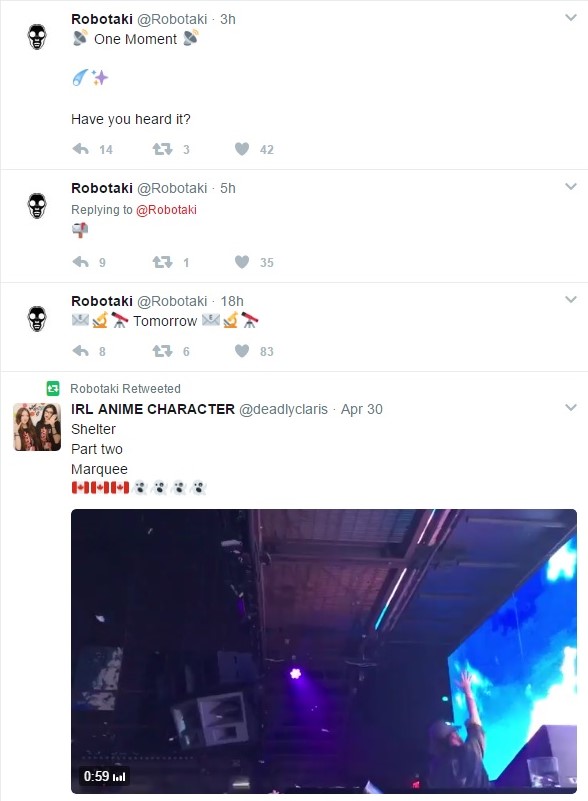 As it turns out, “One Moment” looks like it’s a song which appeared earlier today on Robotaki’s website. To access the song, visitors had to click the “sparkles” emoji at the top of the site.

The song itself is only a 2 minute long mostly acoustic composition, but if you tune in right around the 1:50 mark you start to hear a faint introduction of “Shelter” before the clip ends.

Plus, if you look at the captions for both videos from ‘deadlyclaris,’ a huge “Shelter” mega-fan and friend to all the artists, you’ll see that both times she’s tweeted out the ghost emoji in combination with the Canada flag. Robotaki is, of course, Canadian, and the ghost emoji is surely in reference to his hit single “Ghostboy.” She’s also in communication with all three artists so it stands to reason she might know better than most.

You can check out Robotaki’s website teaser for yourself here and see for yourself but we’re almost 99% sure that Robotaki will be putting out an official remix for “Shelter” soon! And, it also looks like /r/porterrobinson agrees too with user /u/MiltonHuchinson coming to the same conclusion.

The Chainsmokers Spend One Year In Hot 100’s Top 10

The Chainsmokers Spend One Year In Hot 100's Top 10