AWE Accuses Moe Shalizi & His Artists Of Being Fake, Doesn’t Have A Leg To Stand On

Shalizi is a power manager in the EDM world, signing acts like Marshmello, Ookay, Jauz, Ghastly, Tiësto, Slushii, Sikdope, Maejor, and more, so it would logically follow that others might feel threatened by him. AWE in particular chose to engage in yesterday’s kerfuffle by calling out Shalizi’s artists specifically, since Ghastly was the main instigator, we suppose. 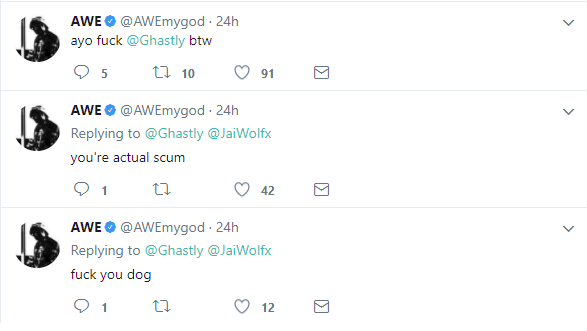 However, as bad as these tweets look on the surface, it wasn’t how AWE first became involved. That happened when Slushii tweeted that “music is supposed to be an escape from [political talk],” and AWE disagreed. Slushii’s tweet has since been deleted. 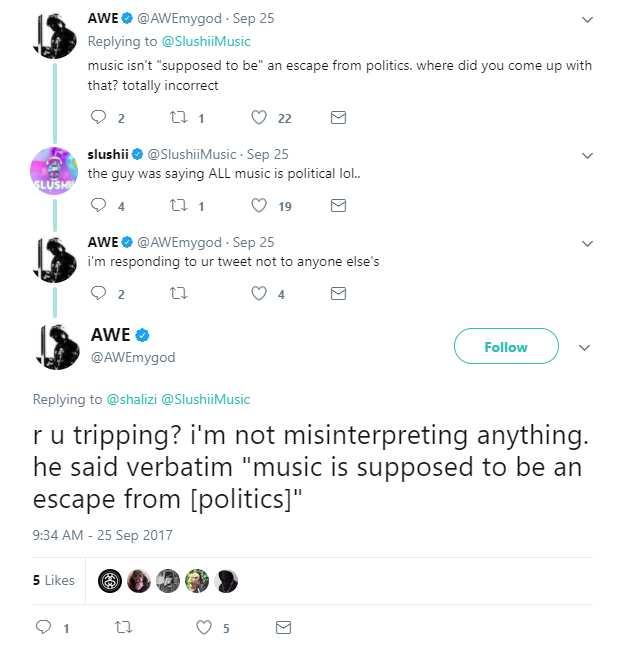 also slushii and $halizi calling me names and shit when i never even started with that. so insane

However, based on the tweets above, he clearly called Ghastly, one of Shalizi’s artists, “scum,” so… and all of the tweets from Shalizi or Slushii allegedly calling AWE names have since been deleted.

Slushii and Jauz in particular chimed in, defending their boss, but also themselves as they were among those accused of not being artists.

We’re all actual, real humans. But because all of us work together and are successful that gets thrown out the window. Think b4 u speak https://t.co/8vYOcFnxDK

AWE, you’re talking to a 20 year rich White kid who was fortunate enough to be “sheltered for 18 years”. There is no way he will understand.

no you didnt ur all g

For his attempt at chiming in and joining the side of the “righteous” in this particular Twitter spat, AWE managed to only make himself look foolish and bigoted and nothing more. Better luck next time.

An earlier version of this article contained fewer tweets from AWE which could have skewed the story in a more negative light.