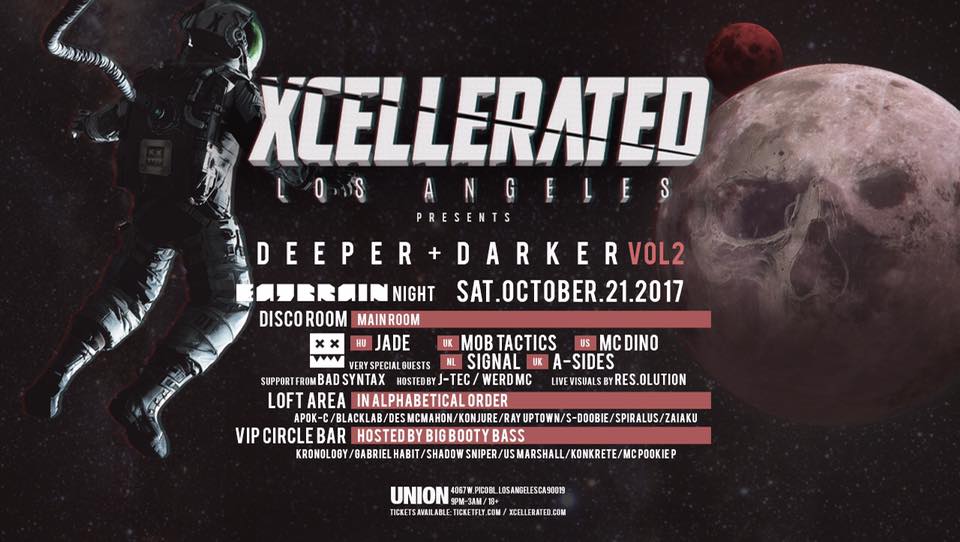 When asked for a quote about his label’s tour coming to Los Angeles this Saturday, October 21, EatBrain label head Jade had a very EatBrain-y thing to say: “The Zombies are coming. We bring hell to the City of Angels.” Fair enough, Jade. Fair enough.

For those who have been living under a rock for the past six years (presumably in fear of some sort of zombie apocalypse), EatBrain has been churning out some of the grindiest, darkest neuro, halftime and drum and bass beats in existence with artists like Machinecode, Aggressor Bunx, DR, Malux and Disprove, just to name a few. The label announced a massive tour this summer and has been chopping up the EU throughout August and September. Now they’re coming stateside and are gaining steam with bigger and bigger brain-stomping lineups.

For EatBrain’s Los Angeles date, Xcellerated was the perfect host (pardon all the zombie puns) as the promotions crew have created a special series just for the likes of such an intense label. The Deeper and Darker series by Xcellerated is tailored to feature the harder side of drum and bass and halftime, so they are happy to present their second installment with EatBrain at the helm.

The EatBrain artists who will be blowing out club Union’s system on October 21st will be Jade himself and the incomparable Mob Tactics. Joining them will be UK drum and bass mainstay A-Sides as well as neurofunk dynamo Signal with local support from Bad Syntax and MCs Dino, Werd and J-Tec.

Per usual, there is not only one epic room at Xcellerated this Saturday. The loft area will also be kicking out dark beats with Des McMahon, Apok-C, Blacklab and newly vetted Kill Your Ego Artist Zaiaku. Rounding out this triple play, Big Booty Bass will be hosting the circle bar with lots more dnb and artists like US Marshall, Kronology and Gabriel Habit.

There will be a lot to take in at Xcellerated’s second installment of Deeper and Darker, and given Jade’s ominous words, EatBrain will not be taking it easy on the neurofunk fans, but that’s just how we like it. Check out the Xcellerated Facebook event page for more info, full lineups and where to get tickets online.