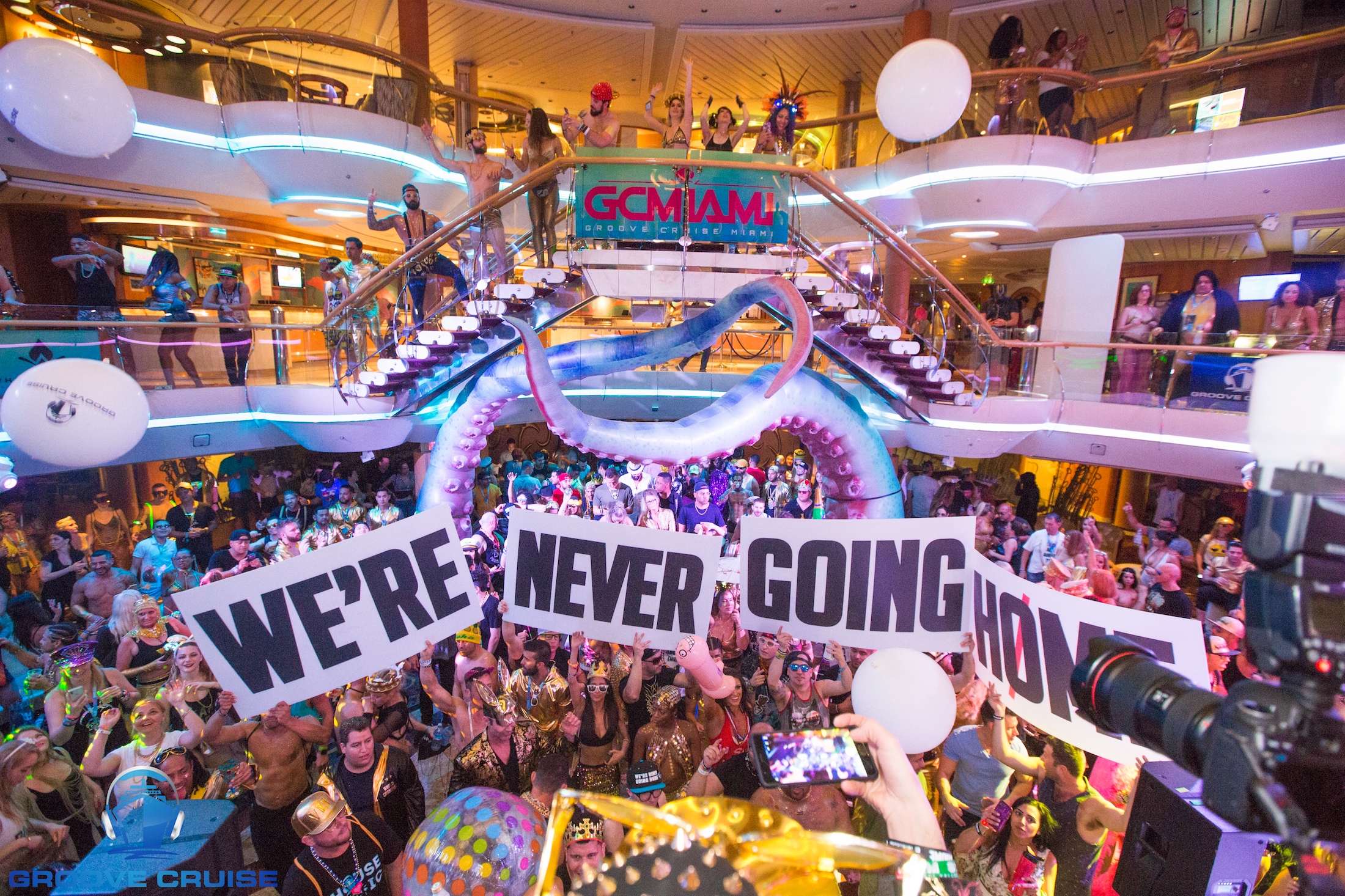 There are plenty of once-in-a-lifetime experiences that people across the globe set out to find and embrace. Whether it be to popular tourist destinations or exotic traveling marvels, human beings fill their social media feeds with the places they have been and the dreams of venturing for more. But of all the music festivals in the world, I have yet to see one that has a fan base as tightly knit as the best of friends while changing venues to make each iteration unique and remarkable. And every year, these fans hop on some of the biggest commercial cruise lines in the world and bring their wildest and most colorful outfits and costumes to dance away to the sounds of house, trance, and most recently bass music. Of course, I’m talking about Groove Cruise Miami and it’s latest journey through the North Atlantic Ocean and Caribbean Sea.

Leaving from the Port of Miami, Royal Caribbean’s Enchantment of the Seas was the host of GC Miami’s latest voyage and the home vessel for all on-board. The first day kicked off with opening performances from acts like Drums of the Sun, Adam Scott, and Kristina Sky who were Groove Cruise’s premiere opening acts throughout the four-day/three-night odyssey. By the time Drums of the Sun hit the stage, the ship was already parting through the open waters and the partying officially commenced (despite the overwhelming amount of Groove Cruisers already dressed to show off their rave attire and funky outfits.

The first major headliner Dada Life arrived bringing excitement and eagerness to the pool deck where the entire boat-load of people gathered. Dada Life’s Stefan Engblom took to the stage and dropped new original tracks like “We Want Your Soul” and closing with classic tracks like “Kick Out the Epic Motherfucker”. Each chosen track was followed by vigorous dance moves and elated shuffling setting a significant high bar for the rest of the trip. Following the bananas and champagne, Felix Cartal took to the stage and switched gears away from the hard-hitting electro house in favor of melodic and vibey deep house. The party remained on the pool deck with more DJing from the likes of Miami’s rising star Damaged Goods and the triple-party-package Dancetronauts.

By midnight, the after-hours crave began to settle in as Club Space’s ABYSS stage at the main deck brought on Thunderpony, SNBRN, and a 7-hour set from Thomas Jack. Meanwhile, the ship’s front end of the fifth deck hosted a 6-hour set from Coldharbour Recordings label boss and trance superstar Markus Schulz in a massive double-decked theater; the sixth deck’s aft hosted Revolution Radio’s party with house music from Carabetta & Doons, ALX, Carlo Lio, and more; and an Officially Addicted party powered the evening with Dean Mason, Prizmatic, Scotty Boy, and many more.

The next day was supposed to be a beach day at Cocobay. Unfortunately, heavy rain and windy weather did not permit the boat to dock safely when we arrived. Instead, the performances set for the beach remained on the boat and the party continued without skipping a beat. Anjunabeats favorites Ilan Bluestone and Jason Ross the earliest headliners playing collaborative tracks like “Amun” and individual works like Bluestone’s “Tesseract” and Ross’s “I Will Be There.” Cosmic Gate followed up playing many of their new hits from their recent two-part albums titled Materia where the duo was joined by frequent collaborator and celebrated singer/songwriter Emma Hewitt. During their set, a lovely Groove Cruise couple were given a special spotlight as they became engaged under one of their favorite trance acts. The crowd cheered with a roaring applause and the festivities continued. As day become dusk, ninth deck’s trance wouldn’t make a return until the late evening where deck eleven’s “Deck of Denial” set-up had an exclusive trance venue with the highlight of Markus Schulz going back-to-back with Cosmic Gate.

Back on the pool deck, Dirtybird’s favorite house heads Kill Frenzy and Shiba San had hour-long slots of their own that brought the darker side of house music to everyone’s attention. Shiba San in particular played tracks like “Stop It” by Fisher and a special mashup of his critically acclaimed single “Okay” mixed with Tchami’s track “SIAW” that closed his set in spectacular fashion. The house party relocated in the theater with the revamped theme of I Need R3HAB where Dancetronauts and Dean Mason made return appearances with new sets. It wasn’t long before R3HAB entered the theater and brought the energy and hype of 2013 electro house back with all its former glory. From his well-known remixes of Calvin Harris music to his new material from his latest debut record, Groove Cruisers partied on until he closed around three in the morning.

The last full day of Groove Cruise took place in the capital of the Bahamas, Nassau. This was the only day where some of the raving would not be spent entirely at sea so fans came out early to head out of the boat and into shuttles to take the dancing over to Fort Charlotte (a historic military installation constructed in the 18th century). From stone foundation and rusted cannons, this would be the closest thing to partying in a castle that festival goers could ever experience. By the time guest arrived, there were three stages set up with the lower stage hosting Thomas Jack and Jamie Jones, a stage on the top of the Fort with Liquid Todd, Felix Cartal, and Bonnie X Clyde, and a stage within the tightest space within the venue where Scooter, Lavelle, and Scotty Boy performed.

To sum it up, this day had some of the wildest performances on and off the ship. Jamie Jones kicked in strong house and techno vibes to a massively sunburning audience. Opposite him, Bonnie X Clyde played a combination of electro house, trap, dubstep, and anything with thick bass attached. Songs like their own “Bass Jam” laced with tracks they mixed in like “Pump” by Valentino Khan gave Groove Cruisers a different sound from the trance and techno they normally are surrounded by. By the time it was time to head back to the ship, guests were still managing to find a way to get their groove on with some carrying speakers they brought with them onto the ship and now with them to Nassau just to keep the music from stopping at anytime.

Back on the ship, new sets returned to the main deck with performances from Frank Walker, Gryffin, and SNBRN. But as the ship sailed back into Miami there was only one person who had the power to lead the sunrise set. Last year, it was Lee Foss who commanded his dancing audience as the sun perched itself on the horizon. This year, Groove Cruise elected Toolroom Records boss and tech-house champion Mark Knight. The rhythms and grooves on tracks he played on our trip back to Miami was vibrant, dark, and infectious acting as a final “hoo-rah” before guest went back to their rooms to pack up and head home.

Overall, Groove Cruise Miami 2018 was a resounding success. Despite the lack of a beach day, the performances were stellar and cruisers were happy to get their dancing freak on. From wedding proposals to a wedding taking place in the middle of the ship for all Groove Cruisers to see, nothing could top how much fun their latest voyage was. I think I speak on behalf of all fans when I say that I look forward to what Whet Travel and Groove Cruise 2019 have in store.