After dropping mysterious art pieces depicting his logo, Aphex Twin is ready to reveal what he’s been teasing. Record label Warp Records has announced a new Aphex Twin EP, and it looks like Adult Swim might preview the EP soon.

For anyone curious and looking at this in confusion, here's a full transcript of the distorted text. Prepare to be further confused by this guff. pic.twitter.com/czvQhHfc3k

If the press release and the attempted interpretation are to be believed, the potential tracklist for Collapse will be:

In related news, Adult Swim accidentally revealed a five-minute segment titled “Aphex Twin: Collapse” to air tonight. The segment has since been removed from the schedule, and Pitchfork reports Adult Swim has removed the segment entirely. It’s possible Adult Swim is playing coy to downplay the leak, but we’ll find out tonight… or whenever they may reschedule the segment, if they reschedule at all. 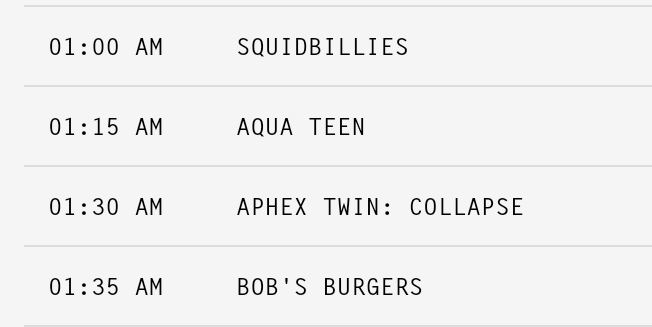 The release date for Collapse is unknown, but it seems like it’s coming sooner rather than later.