The 2010s decade comes to a close next Tuesday. It’s been a wild ride, with electronic music finally getting huge in the US and underground sounds getting their due. New York has been the underground’s beacon this decade, so what better way to close out the last 10 years with one final, epic party in the city?

Cityfox brings a massive edition of its Odyssey NYE & NYD 2020 party back to Brooklyn next week. This time the party spans a staggering 27-hours, running from New Year’s Eve to the closing moments of New Year’s Day. The party takes place at the Avant Gardner venue, hosting four stages and custom built production fit for the occasion.

The lineup boasts a bevy of house and techno’s finest producers and DJs, some of who have become the genre’s renown icons. On The Portal stage, Sasha & John Digweed ring in 2020 with a four-hour set. Following them into the morning are a live set from Stephan Bodzin. Tech house defines later afternoon with Hot Since 82 and Jamie Jones playing right before Dixon and Âme‘s b2b closing set.

The other stages also pack in a slew of talent. Ida Engberg plays The Void stage, andhim and Damian Lazarus play The Bridge stage and Matthew Dekay and Yoko0 go b2b on The Vortex stage.

Cityfox Odyssey will spare no expense with it comes to production and art as well. The party will showcase the Arrival art piece by art collective 404.zero, which looks like a dark but psychedelic marvel. A custom KV2 audio sound system will provide the sound, and pyrotechnics, lasers and visual projections round out the entire production.

Perhaps the best part? The party has re-entry, so don’t fret about the 27-hour runtime…unless you had that in your plans already.

Tickets for Cityfox Odyssey NYE & NYD 2020 party are still available, but don’t expect them to stick around for much longer. Head to Resident Advisor to get your tickets before they’re gone! Check out the full schedule below: 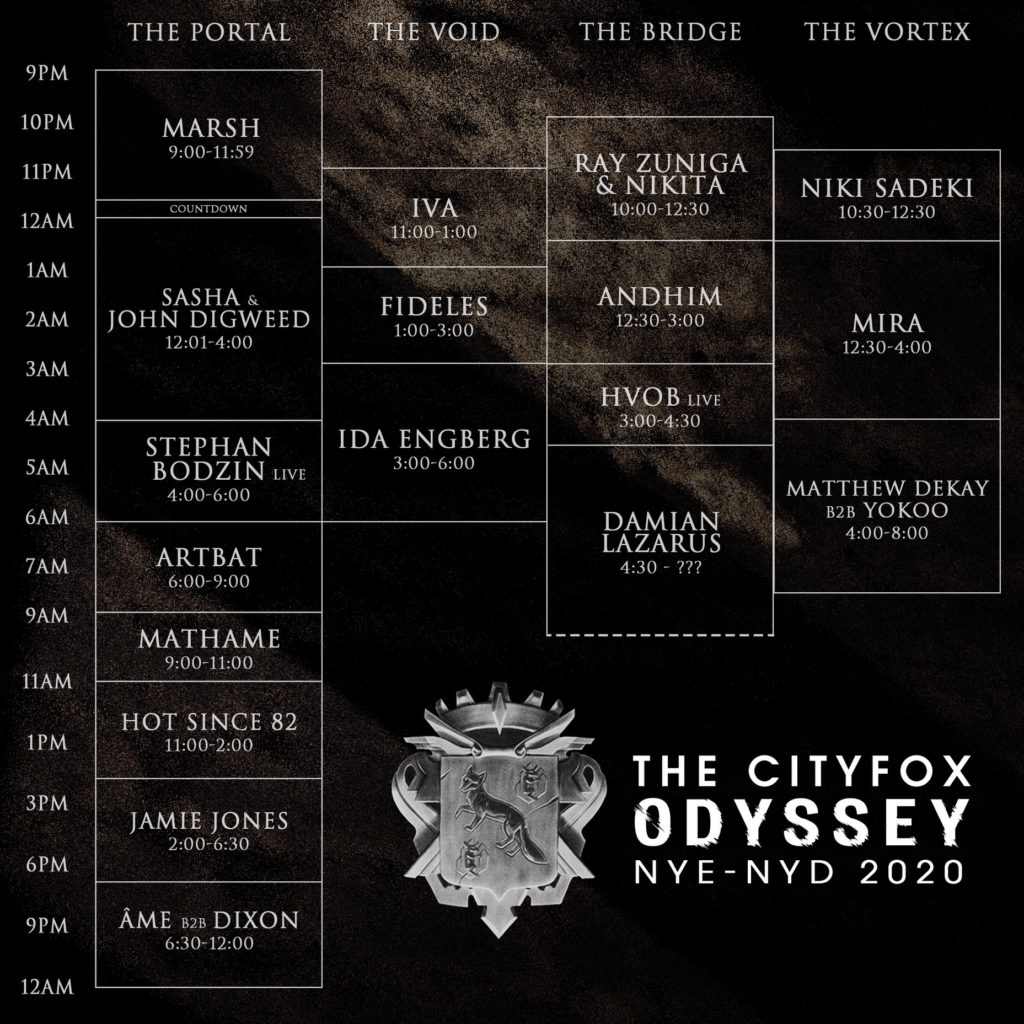