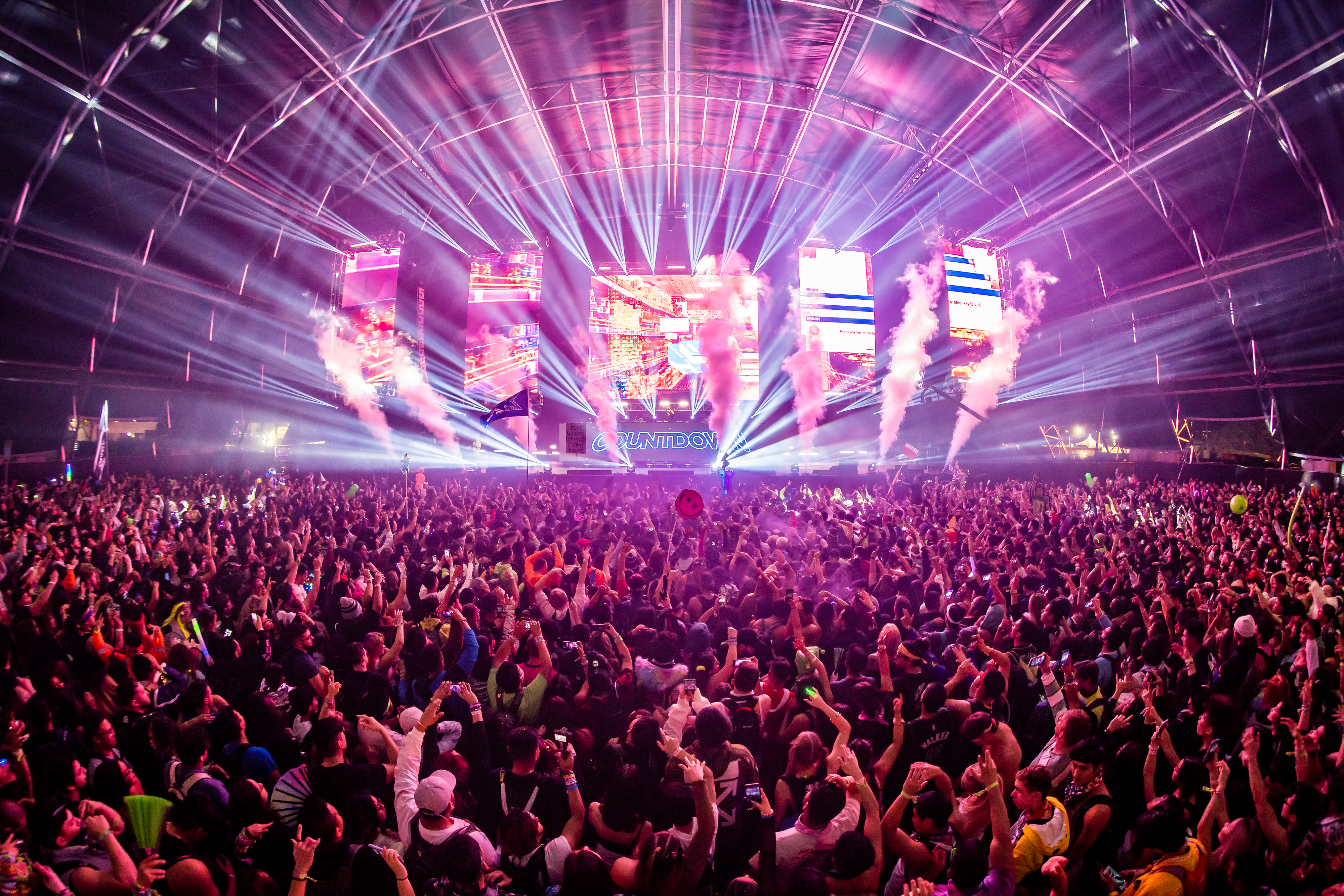 So, I’m pretty sure I got abducted by aliens… I wasn’t actually taken on board a spaceship, but Insomniac certainly made it feel that way for me and 67,000 other Earthlings this past New Year’s Eve at Countdown in San Bernardino. For the second straight year, aliens invaded rave land and Insomniac truly went above and beyond to give headliners a New Year’s Eve experience they won’t soon forget. Some of dance music’s biggest artists including The Chainsmokers, Alesso, Porter Robinson, Oliver Heldens, Galantis and many more helped ring in 2020 all whilst braving the alien invasion.

First and foremost, Insomniac continues to deliver the premiere electronic music festival experience and this was fully on display for Countdown. Last year saw them rebrand Countdown with the alien invasion theme, this year they took it to the next level. There were more alien performers and dancers, the signage was on point capitalizing on all the Area 51 fever that captivated 2019, and the stages were some of the best that Insomniac has ever put forward at a non-EDC festival. As I mentioned before, if you were at the Mothership (Main Stage) for Alesso’s midnight set, you truly felt like you were getting beamed up!

Insomniac also went to great lengths to make sure that headliners were nice and warm during the festival providing plenty of heated areas and indoor bars. On top of that, it was a solid 10 degrees warmer this year than it was last year; it was clear to see that headliners were thriving in ideal conditions. As per usual Insomniac gets high marks for everything, I never had to wait more than two minutes in line for a drink.

The main stage was housed in the gigantic mega-structure on the NOS Events Center grounds and featured some of the craziest lasers I’ve ever seen, it also had a video monitor on the outside of the structure for overflow viewing, over at the second stage (Nebula) things weren’t quite so tidy. ATLiens took the stage at 6:00 and the stage was already packed to the brim, I was dreading what it would look like at midnight for Porter Robinson. The stage itself was impressive with circular light panels as the background and the towers adorned with circles that made them resemble lasers from a 1960s TV show. I stayed at the Nebula for some of Gryffin’s solid DJ set, but for the rest of the night, Mothership would be my home base.

The festival really kicked into high gear at 8:00 when the Chainsmokers took over the mainstage. The crowd was enraptured as Alex and Drew dropped all of their hits new and old including “Don’t Let Me Down,” “Closer,” “Everybody Hates Me,” “Split” and “Takeaway.” Much like myself, everyone was singing their hearts out along with Drew to all of the Chainsmokers massive hits. Drew even mentioned that they don’t always play EDM festivals anymore, so this was truly a treat for everyone lucky enough to catch their set.

Oliver Heldens followed up and the stage continued its transformation into a full on UFO. Speaking of the stage, it featured massive light panels lined up in rows creating a 3D effect; accompanied by some insane lasers, the stage truly evoked the feeling of a spaceship. Oliver effortlessly glided through his catalog of hits including “Renegade Mastah,” “Fire In My Soul,” “Koala,” “Wombass” and “Lift Me Up.” Following the Chainsmokers is a tough ask of anybody, but Oliver was more than up to the task. Few DJs can flow between underground and mainstream sounds like Oliver Heldens can and this was on perfect display during this particular set.

I kept the house vibes going as I made my way to the Twilight Zone stage for Dr. Fresch, and I was not disappointed. The stage had horizontal light panels running across the top and bottom of the stage and there were multiple disco balls on the ceiling that were reflecting lasers all night long. I was only there for one set, but Dr. Fresch did not disappoint dropping some nasty house tunes with lots of low-end. He even acknowledged the crowd remarking that not a single track during this set was used during his recent Nocturnal set in September. I personally feel like the house stage is best served in one of the indoor hangars to give it that warehouse vibe. I’d love to see Insomniac keep that going for future festivals.

I made my way back to the Mothership and Alesso gave what was easily the best performance of the night. If you love progressive house and the sounds that Alesso pioneered earlier in the decade you were in heaven. This might have been the best set I’ve ever seen Alesso drop. He expertly mixed all of his massive hits with glorious progressive house drops. The crowd was blissful as he dropped everything from “Lose My Mind,” “Heroes,” “Years,” “Under Control” and “Sweet Escape.” On top of that, Alesso had custom production that took all of the features the main stage had on display and enhanced them to 1000. It truly evoked a feeling of a UFO landing and beaming up an unsuspecting earthling. Top notch stuff from Alesso.

Galantis closed out the main stage, and they delivered their usual blend of pop and house, however, it was clear that 2019 was in the bag, and we were firmly into 2020. Despite ringing in not just a new year, but a new decade, the countdown was remarkably low-key. Aliens “abducted” Alesso as a video message from the alien leader came in. However, his message of smashing 2019 into smithereens clearly resonated. Insomniac left headliners in awe of the spectacle that was Countdown 2019. When leaving the festival, the gateway had a message saying see you in 2020, so it seems like a safe bet the Countdown will return to ring in 2021. If it’s anything like this year’s edition, like that sign on the Simpsons, I welcome my alien overlords for another New Year’s celebration!