by Georgia Modi
in About, Events, Lineup

Just over a month ago we were all teased with a little snippet of the Movement 2020 lineup. It sported the names of Adam Beyer, The Black Madonna, Boris Brejcha, DJ Stringray, Four Tet, Kobisil, Louie Vega, Maceo Plex, Marco Carola, and Seth Troxler. Fan’s were abuzz with the stacked talent of just these few names so hopes were set pretty high for the full release.

Over the course of the last three days Paxahu has slowly been releasing the lineup for each festival day. This past Monday gave us a taste of what’s to come on day one of the festival. One of the major highlights was undoubtedly the return of Underworld to Detroit — nearly 20 years since their last show city, and their first time playing Movment.

“Detroit’s importance in the evolution and history of electronic music is unquestionable, and has been hugely influential to us,” said Underworld founding members Rick Smith and Karl Hyde. “We’re very excited to be returning after twenty one years away to dance with you again.”

Tuesday gave-way to day two’s lineup that boasted newcomers 999999999. This duo will undoubtedly bring their razor-sharp take on techno with their live performance at the underground stage. However, over on the Red Bull stage you’ll be able to enjoy a different kind of sound with Movement’s quintessential sprinkling of hip-hop as A$AP Ferg also graces the lineup. He is one of Hip Hop’s preeminent renaissance man and leading member of the New York collective A$AP Mob.

Finally on Wednesday we got the lineup for the third and final day of the festival. Monday’s lineup gave us the return of Deadmau5′ techno alias, Testpilot. He made his Movement debut back in 2017 but was met with unfavorable weather that cut the set short. We can’t wait to be able to get a second chance to see what Testpilot can do on the decks in Detroit.

Deadmau5′ return isn’t the only special treat we get to close out the fest either. UK Drum and Bass legends Goldie and LTJ Bukem will be performing together for the first-time as Goldie b2b LTJ Bukem with DRS, this is something that is sure to put a smile on any DnB fans face. But Movement didn’t stop there either, as award winning producer and remixer Jamie xx will also be bringing his seminal sounds to the DJ booth.

Check out the lineup in its entirety below and let us know which names you’re most looking forward to!

Tickets for Movement Festival 2020 are now on sale, visit their website at www.movement.us to purchase. 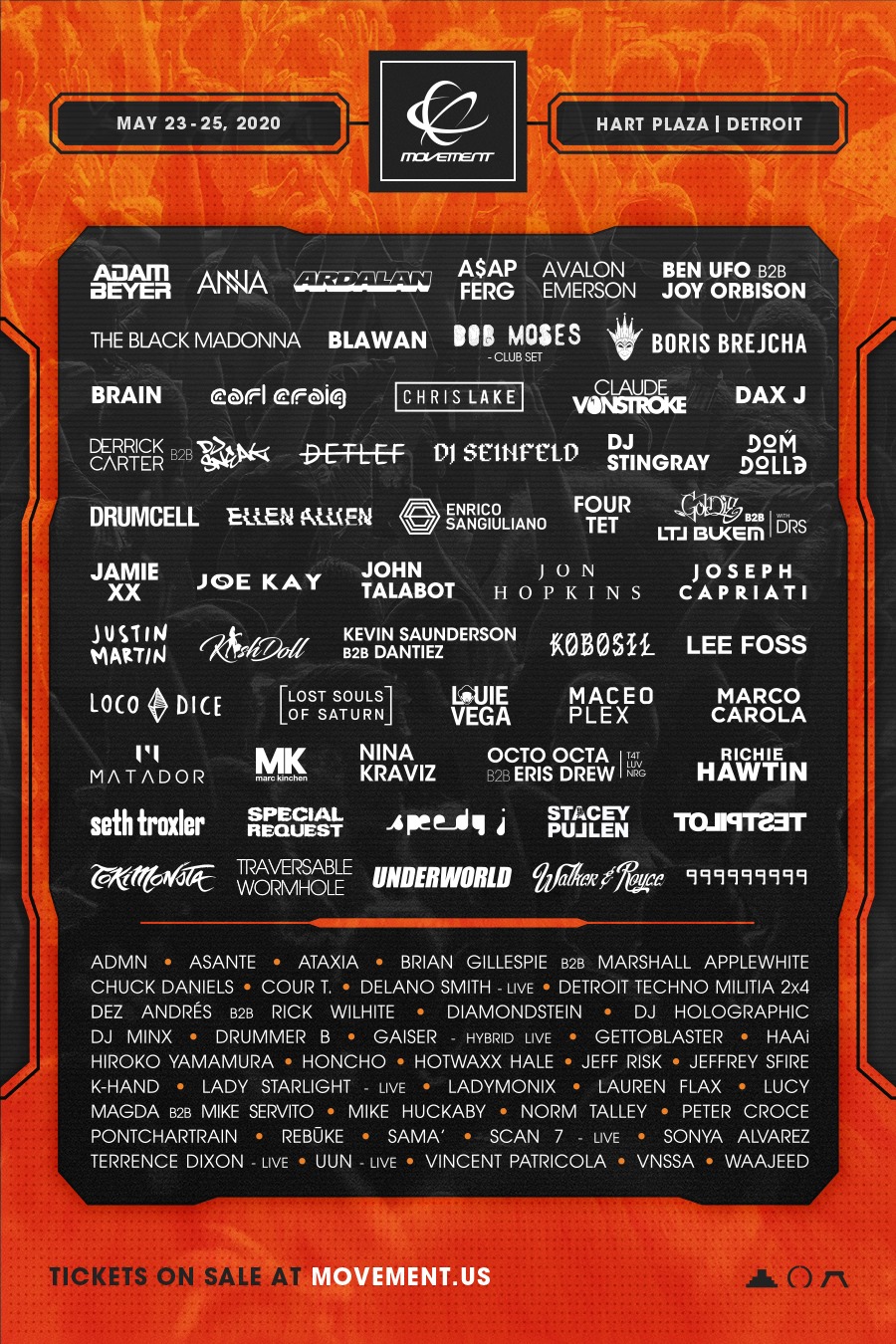