What artists were the “Lockdown Winners” on Spotify?

With touring and live events at a standstill from April 2020 to April 2021, both musicians and audiences turned to streaming. Music research and analytics platform Viberate looked into the numbers to pinpoint the artists who made the most of the situation on Spotify. 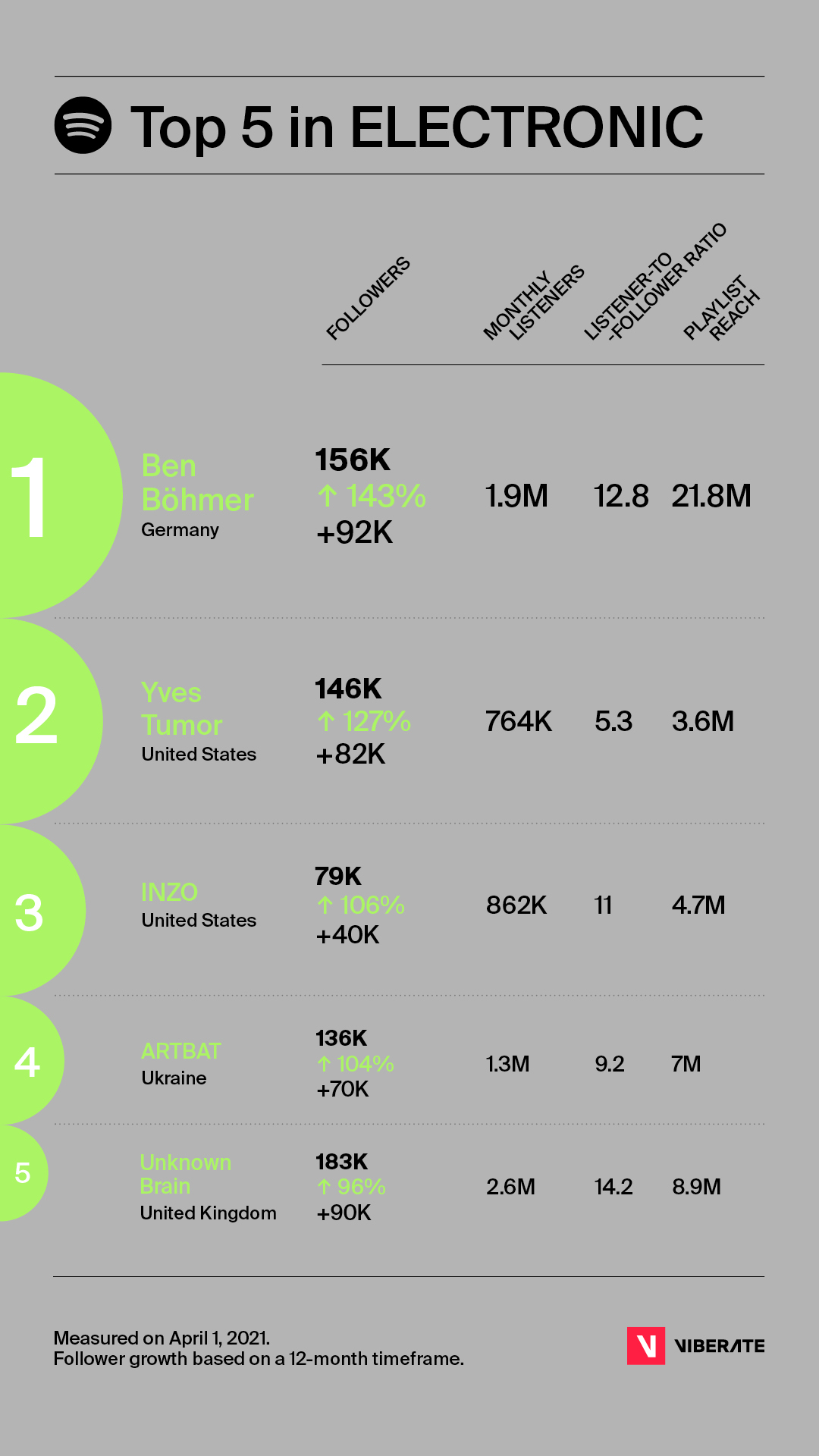 The report ranks the five most successful artists in each of the six most listened-to genres. In electronic, the top 5 artists were Ben Böhmer (Germany), Yves Tumor (USA), INZO (USA), ARTBAT (Ukraine), and Unknown Brain (UK). The German deep house artist beat others with a 143% followers’ increase, thanks to his 2020 releases “Cappadocia” and “Moments” that gained over 18M streams.

Viberate’s report also determined that Spotify playlists and TikTok were hugely influential. Each top-performing artist’s tracks either went viral on TikTok at some point during lockdown or were included in an influential playlist. The report also shows that Pop was the most popular genre on Spotify, followed by Hip Hop, Latin, Rock, R&B, and Electronic.

Viberate specifically looked at the fastest-growing fanbase among the top 1K Spotify artists in each genre from the period of April 2020 – April 2021. Artists eligible in the study had to have at least 10K Spotify followers and 100K monthly listeners. Unfortunately, this did exclude a lot of rising artists who might not already have some degree of notoriety, whose profiles received more visits and listens following a shout out from a peer or a spectacular set at any of the digital festivals held during COVID.

For instance, Megan Thee Stallion was the #2 most-grown artist in hip hop, thanks in large part to TikTok, which saw her rise 2.9M followers in one year. And though she has 30 million more monthly listeners than the #1 most-grown artist in hip hop, J.I the Prince of N.Y took the top spot because of his percentage increase in followers was greater (91K to 475K, a 426% increase compared to MTS’s 328% increase, 900K to 3.8M).

Viberate also found that “sad playlists” were instrumental in the rise of artists during COVID, which… is somewhat expected. That being said, pop and hip hop were shown to have the most “solid” fanbases and were “the most successful in converting listeners into long-term followers.” The same report found that electronic muisc seemed to be the most “divided” in delivering either one-time hits or new household names.

It’s important to remember, even after looking at this report and the data it presents, that Spotify is of course not the be-all end-all of evaluating an artist’s worth or reach. Though these artists might have “made the most” of Spotify, hundreds if not thousands of others saw significant growth on this platform or elsewhere during the pandemic. And even if they didn’t, that’s okay too. Everyone’s mental health was affected and if an artist saw a decrease in followers/listeners but managed to maintain a healthy mental state, that’s also a win in our book.

You can read the whole report here.