Despite the inclement weather, it was a great way to ring in 2023!

by Mark Fabrick
in Editorials, Events

2022 has finally come to an end. The first supposedly normal year after the COVID-19 Pandemic is in the books. I feel like I’ve found myself reading many year-end pieces observing that concerts and festivals are not back in full swing. Sure, if you’re the likes of Harry Styles or Bad Bunny or even Bruce Springsteen, you cashed in on massive world tours. However, I’ve heard many first hand accounts that if you are not of the Styles/Swift/Weeknd class, it was tough to tour and perform this past year. That, however, is outside of the electronic music sphere. While, it is safe to say that dance music has receded from the mainstream since the peaks of 2014 through all the way up through 2017, it sure didn’t feel that way if you were at this year’s Countdown.

Since 2018, Countdown has brought a veritable alien invasion to San Bernardino’s NOS Events Center, and this year, the aliens abducted more of us than ever before. Although Countdown existed in previous iterations, it lacked the immersiveness and wonder that is always present at other Insomniac festivals. After all, other than a clock counting down to midnight, it’s tough to visualize New Years. Enter the alien invasion theme, leaning heavily into 1950s and 1960s camp, that works perfectly for this amazing event. This year, we’re going to point out some festival improvements, and some festival areas that need improvement. At this point, everyone knows that Insomniac puts forth an unparalleled experience here in Southern California. As well, if you’re reading this, you’ve probably seen Zedd or The Chainsmokers live before and have a good idea of the tracklist.

Something new with the festival layout

While I didn’t go to Escape, so I’m not sure if this was the first time this had happened, one of the greatest things Insomniac did was install two bridges over the famed pond at the NOS Events Center. Who knew? With two walkways, people were able to move seamlessly across the pond, and from the Nebula stage to the two other main stages, effortlessly. For years, unless you’re right at the festival entrance or exiting the stage straddling the perimeter of the NOS grounds, crossing the pond has been a challenge, especially later in the night. This year, problem instantly solved. Please keep the bridges across the pond.

I hinted at this during my preamble, but, goddamn, I cannot give it up enough for what a great job Insomniac does putting on these festivals. We here in Southern California are spoiled, the lineups never cease to amaze. Every single artist delivered, from deadmau5 to Sidepiece, from the Chainsmokers to Zedd, from Loud Luxury to Vini Vici. I’m only listing the artists at the main stage, the lineup was beyond insane. I’ve seen “redditors” poo-pooing that Insomniac festivals often have repeat artists. So what? Coachella has repeat artists. Why should that take away from the experience if you saw an artist once before. I witnessed Sidepiece throw down a completely different set from the one they played at HARD Summer earlier this year.

If you’re not from Southern California, a little bit of rain at a festival probably doesn’t bother you. However, if you are a So Cal native, you’re horribly unprepared for the rain. While, obviously, Insomniac has no control over the elements, they too were horribly unprepared. A massive winter storm deluged the area on New Year’s Eve, leaving many areas (including the heated VIP area at the main stage) in huge puddles or ostensibly flooded. While it seems that most headliners embraced the inclement weather and were prepared with ponchos, the rain led to massive crowding at the stages. The main stage was borderline unbearable and certainly did not feel like VIP as the masses huddled underneath the mega structure. Again, at this point, what you did was based on the individual, you either embraced the rain and the wetness or struggled to no avail to stay dry. 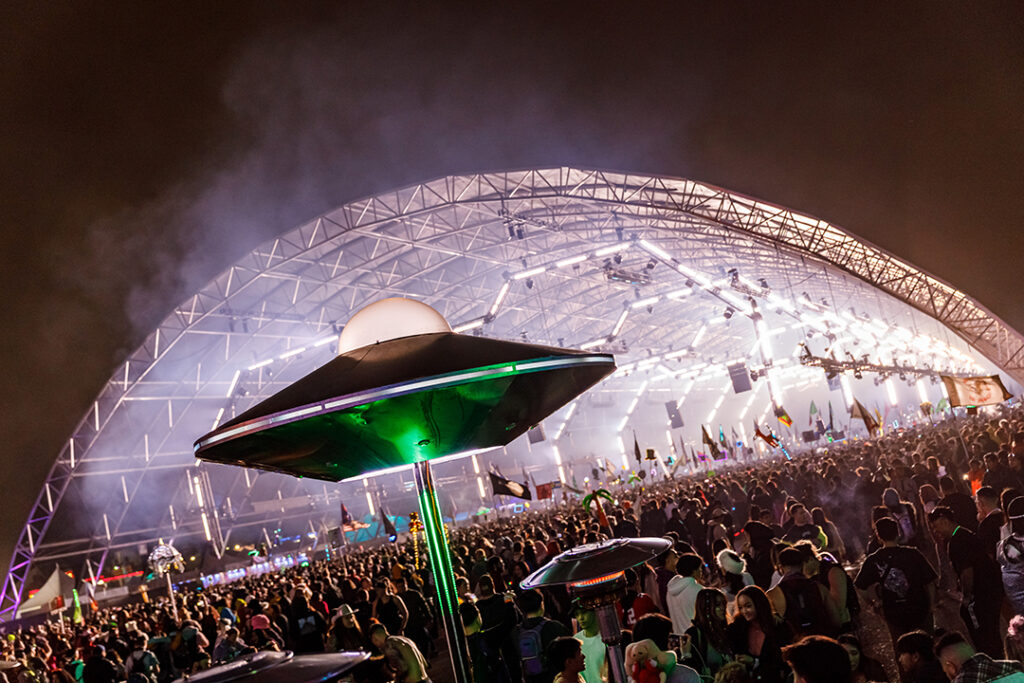 Now that I’ve gotten all the logistics out of the way, I would be remiss if I didn’t at least partly delve into the music. I’m obviously not the first person to make some of these observations. First and foremost, house and techno have now fully moved into the mainstream. Seemingly every act at the mainstage had more than a few techno drops in their sets. From Mau P, to deadmau5, to Sidepiece, to the Chainsmokers, to Loud Luxury, the club vibes were very present at the Mothership.

The most played song (or remix of) of the weekend had to be Ray Volpe’s massive hit “Laserbeam.” Not only is the ubiquitous banger perfect for the vibe of the Alien Invasion, every stage was well equipped with laser beams of their own whenever the song was dropped. If I was playing a stage that’s supposed to be a massive spaceship, I’d probably play “Laserbeam” too. Don’t have much else for you on where the music will be headed in 2023. But, you can always check out more of our outstanding year end coverage.

I opened the article up with my observation of how 2022 was far from a return to normal for most of the music industry…with the dance music industry being a major outlier. That being said, I’d expect business as usual from Insomniac in 2023. Countdown 2023 just got announced, EDC Las Vegas is already sold out, Beyond Wonderland will be back at the NOS in just over two months. HARD Summer teased their 2023 announcement. Seems to me like all is well in the world. They say that the only things certain in life are death and taxation. I would say add to that list, that you’re going to have the best lineups, the best stage production and (barring severe winter weather) the best festival experience you can imagine at any Insomniac festival!