by KSpence
in EDM News, Events

For 10 years, Boysnoize Records has been at the foreground of cutting edge dance music, led by it’s namesake Boys Noize, the German producer with a penchant for heavy beats. Since 2005 the label has seen releases from some of the biggest acts to date, including UZ, Skream, Destructo, and even Dog Blood, his collaboration with Skrillex that will be returning this summer.  Boyznoize Records continues to be unapologetic for its releases, tracks that always feature something or someone new and exciting rather than a tired formula to race up the Beatport chart. For this, BNR has announced a tour to celebrate a decade of success.

#BNR10YR is a worldwide event, featuring special shows in different cities with some of the label’s veterans. It begins at WMC on Saturday, March 28 and stretches deep into summer, hitting major European cities like Berlin, Paris, London, and more. Though lineups are different in every city, expect names like Djedjotronic, Scntst, Spank Rock, and Pilo to join special guests A-Trak, Destructo, Tiga, Salva, and plenty others.

To also commemorate this special occasion Boys Noize also made  a special #BNR10YR i-D mix, which you can listen to below. For more info surrounding the tour, visit Boysnoize Records’ website. 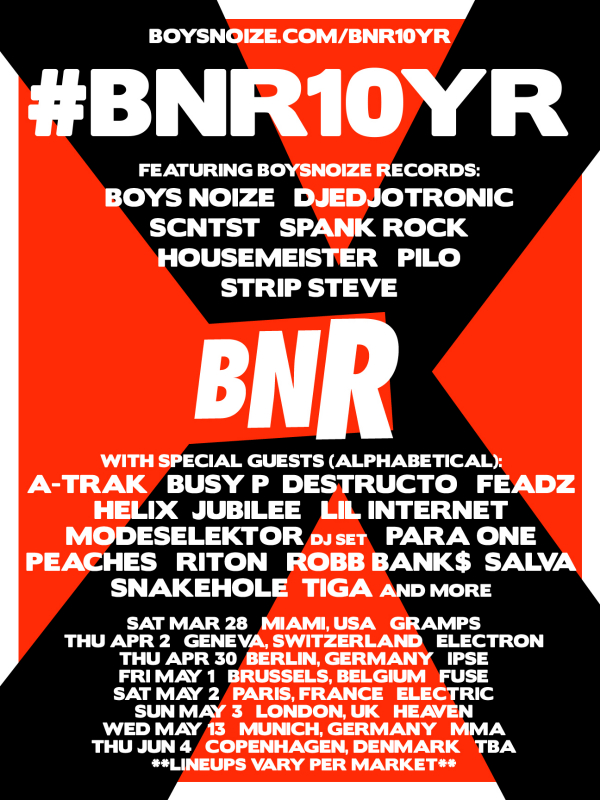 SLDGHMR Toe The Line, Show Us “How It Works” [Free DL]