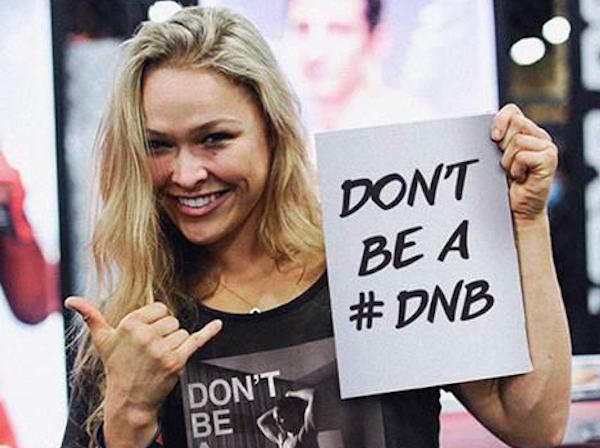 As a genre, Drum n Bass has been around since the late ’80s/early ’90s and the days of Goldie, Aphrodite and numerous other legends that don’t get nearly enough respect today as they should. It has had influences in the movements of breaks, techno, dubstep and more and is one of the pillars of modern dance music. And producers have taken notice.

Hey @RondaRousey #DNB has been around before you decided to make it yours .Since the early 90's infact .And it is fighting,but with beats

Today's news: @RondaRousey tries to trademark #DNB ("Do Nothing Bitches), doesnt realize theres an entire music movement around the acronym

@RondaRousey realize #DNB
(Drum & Bass) is already a "thing"..
It's a music and culture that has been around for decades b4 you stole it.👊🎶

Hey @RondaRousey. We phucks with you heavy but, you can't have #DNB.

Love,
The Drum and Bass community

Whether the music community will appeal the filing, or whether someone will notice that the acronym is widely used in relation to a specific musical genre, is yet to be seen.

However, the reality is a lot less glamorous. Though trademark law is dense and hard to navigate, Rousey’s trademark probably won’t interfere with the acronym designating drum n bass. If anything, the rampant use of #DNB on merchandise and social media might dilute Rousey’s trademark, invalidating it. Though, that’s something for the U.S. Patent and Trademark Office to figure out.