It seems that attendees weren’t the only ones unhappy with the treatment at TomorrowWorld. Of all the artists that played the festival, Kaskade is so far the only major headliner that has come out publicly condemning the festival in any visible way.

Dang. And I thought the artist hospitality sucked ass… 😲http://t.co/6Fy2ZczF3B

Granted, he did not go into detail about his own situation, but he makes his point pretty clear. However, some people are not happy with his public acknowledgement of the incidents that happened this weekend. In particular, Albert Berdellans, Marketing and New Media Manager at Ultra Music Festival, voiced his concerns about “making the scene look bad” by spreading the story to a wider audience. Kaskade’s response is perfect. 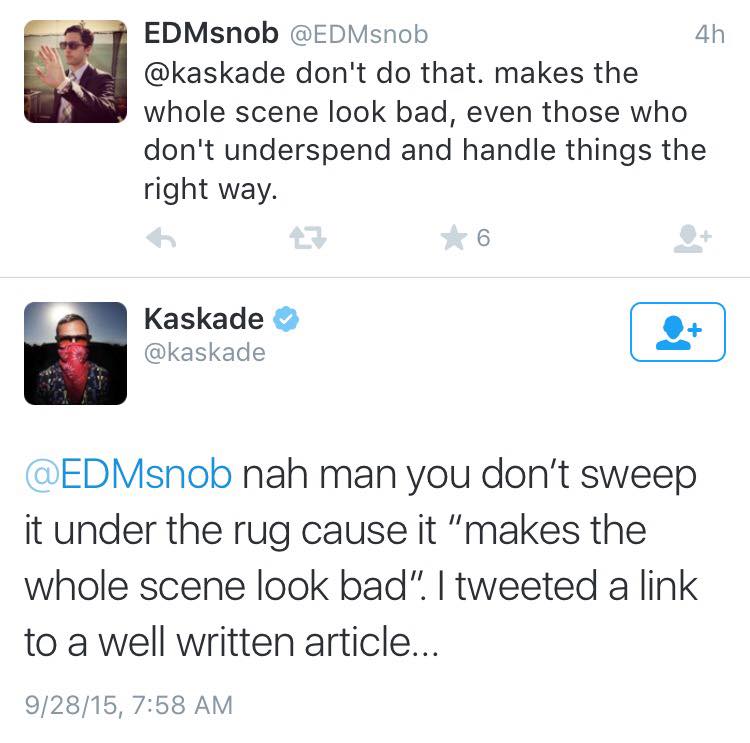 Honestly, this speaks to a much larger issue than just TomorrowWorld. Bad things happen. Even in the fairy tale world of electronic music where PLUR is worshipped and community is one of its tenets, bad things happen. It’s ultimately more detrimental to “sweep it under the rug” as Kaskade puts it. It’s the same as bottling up emotions – eventually, that shit gets out and it causes more harm than it would have if you had just aired it out in the first place.

I understand that for a lot of people, electronic music is a home and a waypoint. It has saved lives, and I don’t dispute that. However, reality is not PLUR, and it’s unfortunate that people like EDMSnob feel that hiding real life events will somehow keep the scene pure.

Kaskade very simply tweeted a link “to a well written article” that happens to document the bleak situation that thousands of attendees found themselves in. If that prevents shit like this from happening in the future, then that is a good thing.

This points to a larger issue like I mentioned before, but more on that later.