Jamaica’s first ever EDM festival, the three-day Paradise Lost, will feature two EDM artists whose sounds are most definitely on complete ends of the spectrum – Bassnecter and Tiësto.

Also announced alongside the two EDM giants are a whole host of names including local legend King Jammy, AlunaGeorge, Felix Jaehn, Big Gigantic, and even rap duo Zion I. Casablanca Records will curate the festival’s Beachfront Stage so expect to see some of the talent on their roster such as Caroline D’Amore, Gazzo, and Prince Fox on hand. Lance Herbstrong, Natalli Rize, and Audien make up a few more still unannounced names that are expected to perform. If that lineup still seems relatively short for a three-day festival, don’t worry because more names will still be revealed as the festival is still a ways away taking place from March 10th to 12th.

Branded as a festival meant to take electronic music back to its true Jamaican origin, King Jammy had this to say about the upcoming festivities.

“I feel great about EDM coming to Jamaica because most people don’t know it originated here. I am not just an innovator. I am a fan and for my performance, I’m going to perform never before heard tracks with a back-to-the future effect while mixing live on stage. I listen to artists like Bassnectar and it makes me feel good that the dream is still alive and being built upon by today’s talented artists.”

Taking place in St. Ann, a historical musical paradise where Bob Marley, and more first came through, Paradise Lost will also give reggae fans the opportunity to tour the rest of the parish and visit Marley’s birthplace and resting place. Other activities will also be on hand to accommodate the Spring Break crowd such as beachfront camping and bonfires, boat rides, Jet Ski rentals, a fireworks display, Parasailing, Banana Boat Rides and more.

Early-bird tickets will go on sale Tuesday, November 17th at 10AM EST at the official site with the rest of the GA tickets available a week later on the 23rd. 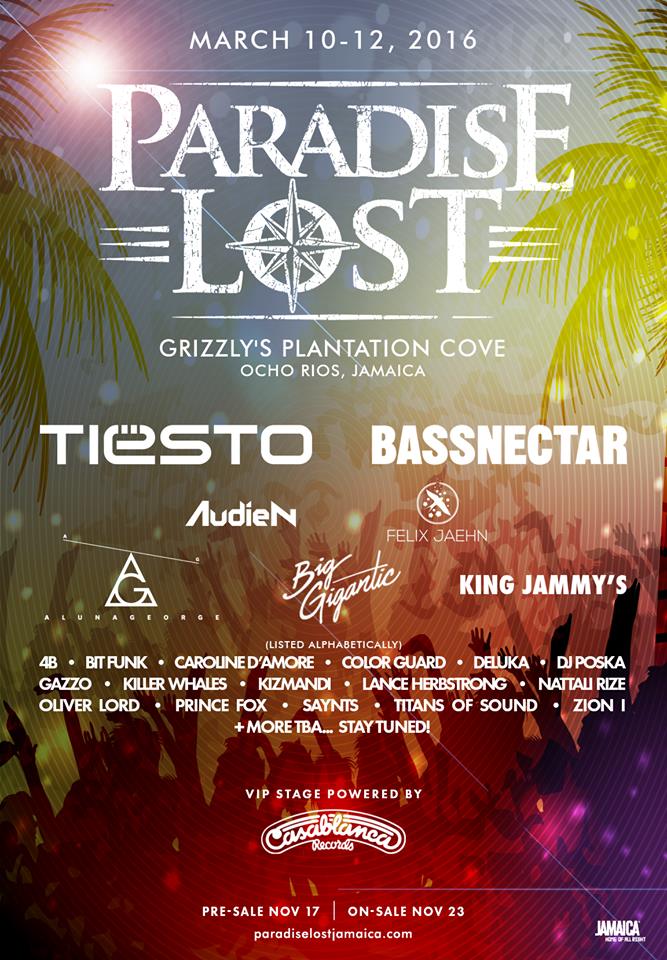