Police Warn Against Dangerous ‘Ecstasy’ Tablets In The UK

PIC BY DAN ROWLANDS / MERCURY PRESS (PICTURED: NATION NIGHT CLUB IN LIVERPOOL WHERE A TEENAGER DIED) A teenage reveller has died at a superclub's farewell bash starring some of the world's top DJs. A 19-year-old man died in the early hours of Sunday morning after falling unwell at Cream nightclub in Liverpool. Emergency services rushed to his aid at around 3.30am but the teenager died later in the Royal Liverpool Hospital. The man is yet to be formally identified but his next of kin have been informed and the death is being treated as 'unexplained'. But detectives confirmed that they are looking into the possibility that the death may be linked to 'illegal substances'. A second man, who was not in the same party as the teenager, is also in a critical condition after being treated at the club almost 90 minutes later. The 41-year-old man remains in hospital. SEE MERCURY COPY

Two men are reported dead today in the UK after allegedly taking a dangerous pill sold as ‘ecstasy’. Police are warning civilians against the pill, marked by a unique ‘lion’ or ‘griffin’ emblem, shaped like a shield.

John Milburn, 19, died in an ambulance en route to a hospital, after emergency services responded to a call from Nation nightclub in Liverpool. Another man, 47-year-old Andrew Glaister, has also died, and is suspected to stem from similar circumstances at the same nightclub. 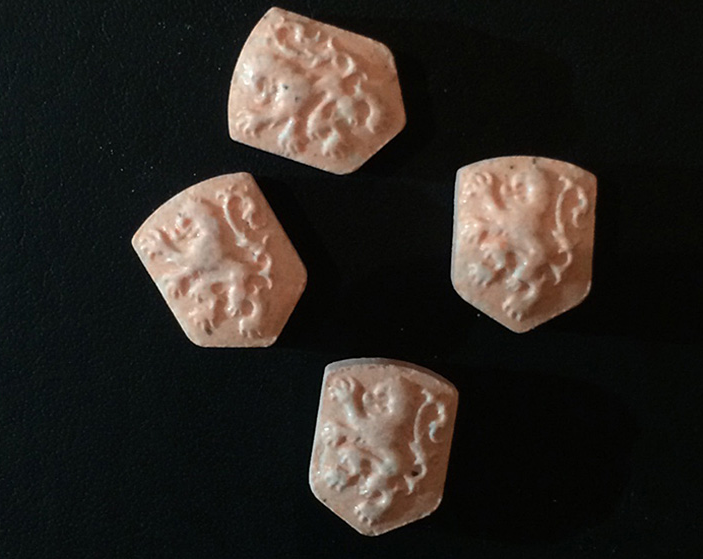 Det Chief Insp Mark Kameen said today: “We have launched a comprehensive investigation into the tragic deaths of these two men. At this stage of the investigation, we are exploring a number of lines of enquiry, one being that they may be drug-related. We are speaking with friends of both victims alongside staff and management from Nation nightclub, to establish the full circumstances surrounding the movements of both men that night.”

Police have stated that both deaths are being treated as “unexplained” until they can recover the fatal batch of tablets, and hopefully have them tested.

DCI Kameen added: “We recognise our city’s nightclubs and bars will be busy over the coming days, especially on New Year’s Eve and I would like to remind people not to take any illegal drugs. You don’t know what’s in them or how they are going to affect you.”

A similar warning would be issued to residents of the US as New Year’s Eve approaches, to be sure to know what you’re taking, if you choose to do so. Please use testing kits to ensure that what you’re taking is legitimate, and not something that could prove potentially fatal.