Music piracy has been around since the 1990s when Napster first exploded onto the scene. In the 2000s, Limewire/Frostwire controlled the internet, but now most people have moved onto The Pirate Bay and other peer-to-peer torrent sites. While many record label executives have given up on fighting piracy as a constant in every form of digital entertainment, be it the pirating of movies, live sports content and etc., others like Tommy Funderbunk are increasingly looking to work with peer-to-peer rather than against it.

As the owner of an independent record label, Tommy understands firsthand the power of peer-to-peer filesharing.

“In about 2002 I started a record label, we signed Heart—we signed a few great artists, but something was nipping at their sales: managers of some of the bands started calling, going, ‘hey, why are these people thanking us for the album in Brazil?’…We realized that as a small independent label, we could not compete in terms of sales with the volume of traffic.”

Instead of opting for ligation, as many other rightful content owners have done, Tommy took meetings with people on both sides of the piracy debate and ended up creating a new company Muzit which is known for its TRACE Program.

TRACE, which stands for “Torrent Reporting and Content Engine,” tracks and follows peer-to-peer networks in real time following downloads all across the world and pinpointing physical locations. While most companies with that much user information at hand could start doling out the cease and desist orders, Tommy has in fact opted to leverage that kind of user information into individual marketing campaigns helping their artists reach their fans and establish a better relationship. For example: after learning via TRACE that they had over 200,000 listeners lurking in the shadows, country band Mavericks decided to raffle a guitar to a pool of file-sharers as an incentive to go legitimate.

The real-time pinpointing of where an artists’ fans really are has also helped artists plan tours based on regions where there are a lot of people listening to their music. The most surprising thing about this is that this isn’t revolutionary technology per se – the Digital Millenium Copyright Act has actually given copyright holders access to this information for a long time now but such information has previously been used for litigation. Tommy understands that there is no real way of permanently ending piracy and instead tries to use that to his advantage.

“We are realists. We understand that every song, every movie, every video game is already on the internet. Why not establish a positive relationship?” 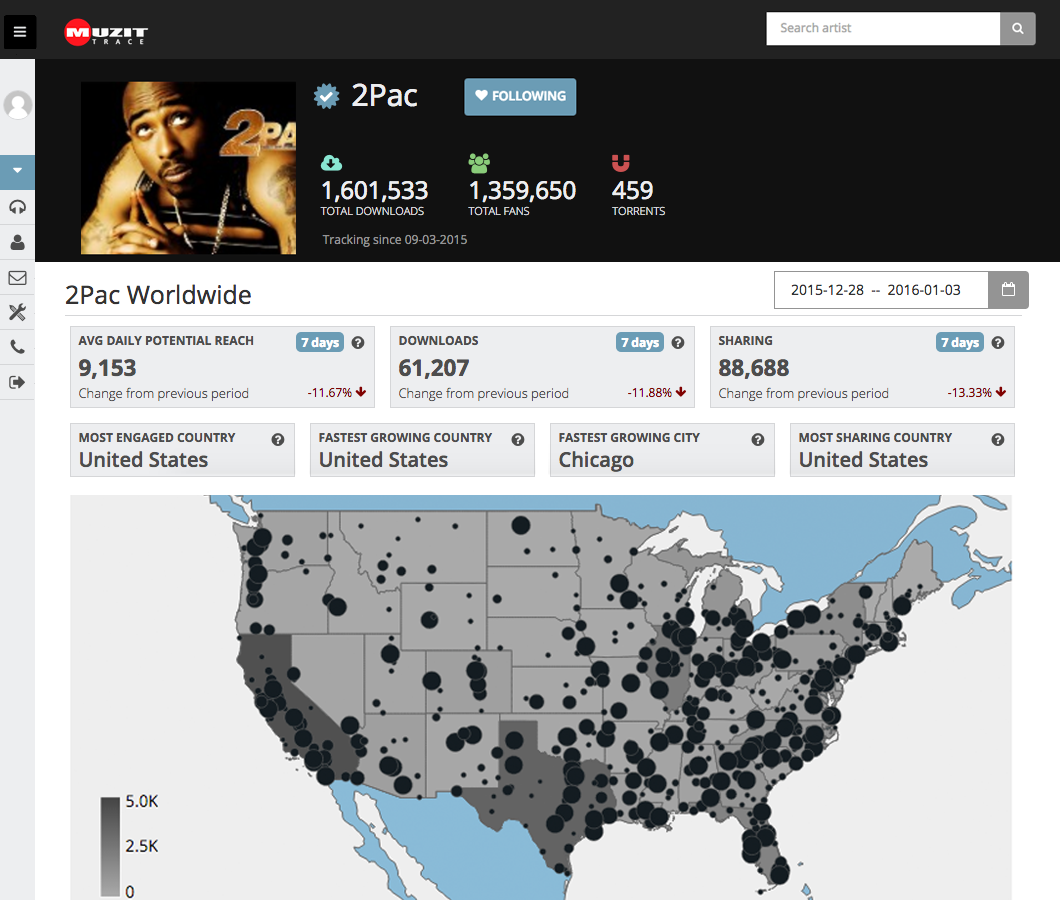 Take a look at the screenshot of the TRACE platform above. On the surface, artists are given a whole host of information regarding active downloaders, regional “hotspots” in the form of fastest growing cities, most engaged countries and what not, but to the trained eye there’s even more information lurking beneath the hood.

“Every piece of information is a unique stat…a household. Sometimes, within these households lurk ‘super-users’—those who seed the most. Underneath each of these [super-users] is a network of people that share with them.”

If you’re wondering about the legality of obtaining such information, you shouldn’t be worried. Muzit can allow artists to send their fans offers for which they must opt-in to receive. If fans decline, no information has been shared with the artist and the platform’s map is only fed a zip code. “Muzit uses the DMCA to have the legible right to communicate to the ISP (and thus the fans) but the Muzit request of the ISP is totally different.” What that means is that user ISP addresses are not given to artists via TRACE and Tommy assures us that artists utilizing the TRACE platform are not looking to sue their fans either.

“We choose to work with individual artists who do not want to sue their fans,” he said. “If you want to create positive relationships, then Muzit’s for you. If you want to sue your fans, there’s other companies that do that.”

While certainly there remains a question about the ethics of having such sensitive user information out there on a monetized platform, from a legal perspective it looks solid. What remains to be seen is whether other artists will start to utilize platforms such as Muzit to gain an advantage over their peers rather than resigning to the fact that piracy will never be cured and doing nothing about it.