Flume Accused Of Stealing Track From What So Not & Skrillex

Correction: The melody is found in the YouTube video at 41:50, not 40:50. And in that case, the melody sounds exceedingly similar, some might even say identical. The fact that we still don’t know the credits behind the track remains the same, and Flume could very well still credit the What So Not project and/or Skrillex in the final release.

Flume ignited the music world two days ago when he revealed a short teaser to his upcoming album Skin on Soundcloud. It was a pure return to form for the future bass innovator, with an admittedly deeper and wider sound palate that left us all wanting so much more.

However, vocalist George Maple, who was featured on What So Not’s track “Gemini” and Flume’s own “Bring You Down,” believes that a track on Flume’s teaser was stolen What So Not and Skrillex.

But wait… wasn’t Flume in What So Not?

The tracks involved are at  41:50 in the YouTube video (familiarly referred to as Beachlife ID), and 1:34 in the Soundcloud stream below.

George Maple claims this is no laughing matter. The tweets have since been deleted. 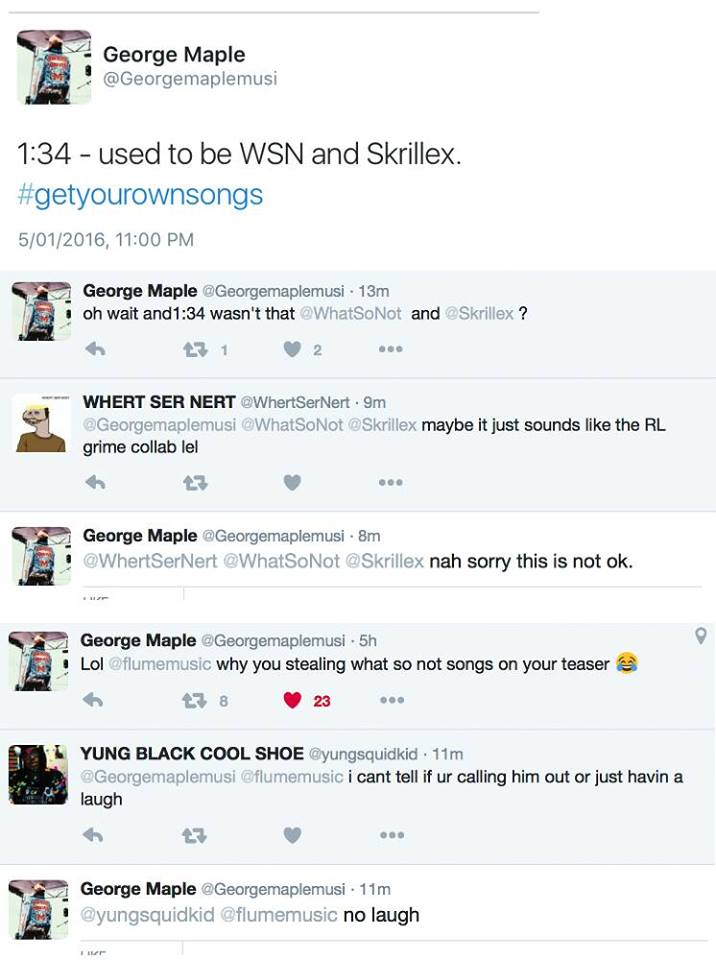 The thing is, even if the sounds in the teaser were recycled from an old Skrillex and WSN project, we have no way of knowing the circumstances behind it – and neither does George Maple. Her premature accusations are essentially unfounded.

The track could end up with a “feat. Skrillex & Emoh Instead” in the final tracklist, we don’t know. But for now, we’re still just stuck enjoying the teaser, and waiting for the full album to drop, so we won’t worry about this too much.