Envision Festival: Discovering A New You

by Timmy Kusnierek
in Editorial, Events, Reviews, Worth Sharing

[dropcap size=big]M[/dropcap]y story began at the airport. The official Envision bus picks up travelers from the San Jose airport, and it’s there where I unknowingly met those who would become my best friends over the next few days. Sometimes there’s a sign pointing the way to the shuttle check-in, but of course, being Costa Rica, it’s kind of anything goes. I ended up identifying the queue by its people. Claiming curbside real estate were a number of festified travelers. Already, the shoes were off. Sarong clad men trouncing between discussions, dreadlocks aplenty, and smiles gleaming in the sun all marked the beginning of the journey.

On the three hour expedition to Uvita, the back of the bus was quiet, the middle talkative, and one rather burly gentleman attempted to pipe a downtempo mix through the PA system, but was thwarted by static and the not-subtle groans of those trying to sleep.

There were two stops, and my indecision and fear of FOMO led me to the better choice, for once. The first stop was in Dominical, 18 kilometers north of Uvita, where the festival takes place. I didn’t know there was an option to go on to Uvita, and though being closer to the grounds would have been enticing, having arrived two days before the festival, I had time to acclimate. I was told there would be better chance of finding a hostel in Dominical, that all the Envision pre-partying went on there, and that Uvita would be packed to the gills. Dominical it was. 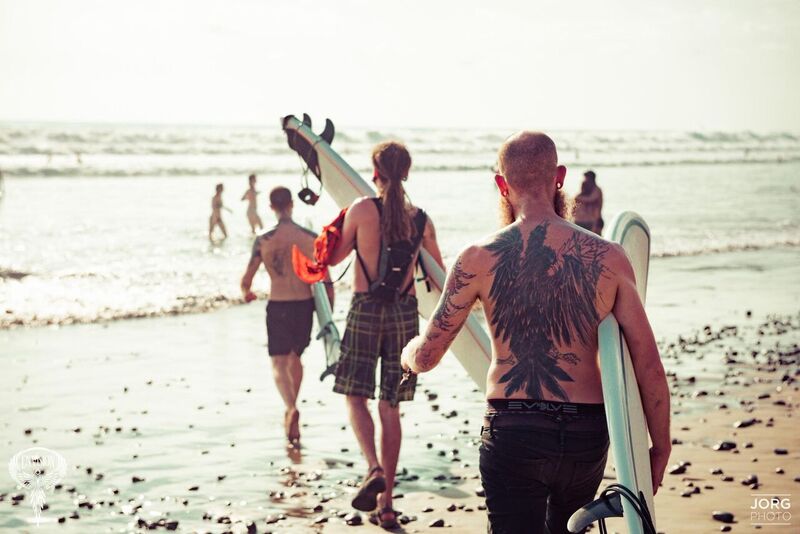 Having done the bare minimum of research beforehand, and with no firm plans in place, I did the only sensible thing… I followed the sounds of reggae to the nearest beach bar with the intention of getting cozily shit-faced, and ahoy! I saw the same psychedelic hat that one of my fellow bus-mates had been wearing. Cruising up to the trio of lads, they promptly bought me a beer, and welcomed me with exceeding hospitality. They’d been to Envision the previous year, and knew just how to go about the adventure. “The thing to do is sleep on the beach,” they said, and after gazing through the palm covered shoreline, I saw hundreds of tents gracing the windswept dunes. Later that night, there was a fire, dancing, merriment, and frolicking to and fro amongst the array of campsites meeting new people. Envision had begun.

After spending the second night in Uvita with a world traveling barber, I hitch-hiked to the festival grounds with a fruit trucker. After arriving to the gates, I was surprised to learn he wanted to check out the festival himself. In we rode, together, making a scene of parking this huge, ridiculous royal blue fruit trailer. Soon, we were walking towards the entrance, I looked away for a minute, and my companion was gone to the crowd of people waiting to get their wristbands. Just another nuance, another chance meeting, and another human that will never know how interesting I thought them to be.

Winners Announced For The 2016 Remix Awards