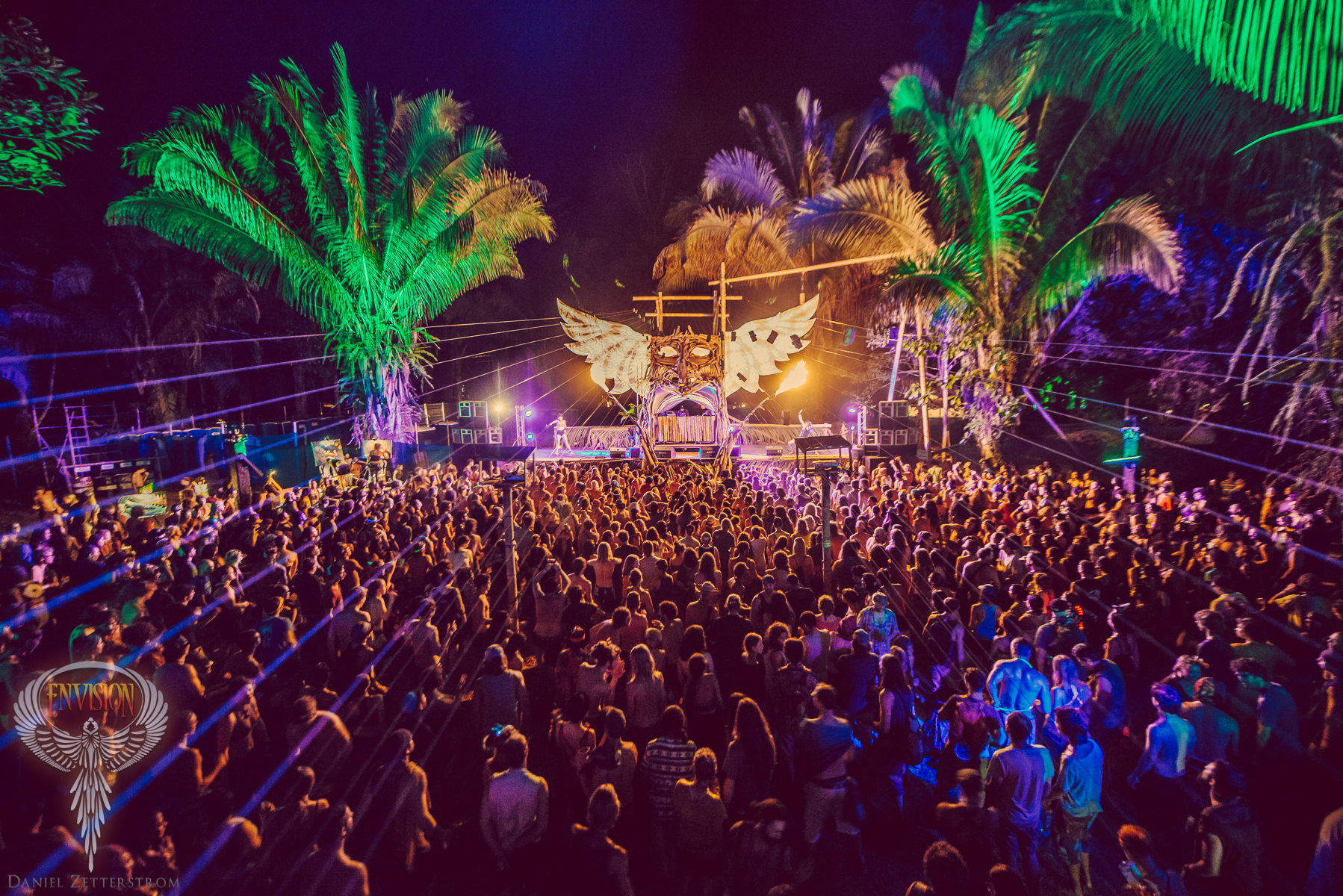 Envision Festival: Discovering A New You

Despite being rather young, Envision’s production is quality through and through. Sure, a couple mischievous spirits climbed it on day one, but the Luna stage’s bamboo catwalk officially opened for use on day two, and lord was it glorious. Picture an immense structure of three towers, with the middle being higher, and the outer two connected by a long strip of bridge, almost like a giant middle finger to society’s constrictions. I couldn’t bring myself to post up on there for hours like some, but the time I did spend on that beautiful creation of sustainably sourced bamboo was ul-ti-mate. Losing face to hi-fidelity glitch hop pumping from a system of Funktion 1 speakers while dangling your legs 30 feet in the air in the middle of a rain forest… You get the idea.

And there’s a beach! Sure Envision isn’t the only festival that packs an ocean nearby, but I’ll be damned if they don’t boast the best setup. Vendors line the short trail through the bush, and local cuisine is roasting alongside hand-made jewelry just waiting for someone to stop by and pique their interest. The beers are relatively cheaper on the beach, and it’s technically not Envision festival grounds, so the vendors lining the path offer an assortment of different wares than what you’ll find inside. But the beach isn’t all sun and smiles. The rip current can get pretty serious, and since it’s not official Envision territory, thieves are waiting to swoop in for unattended bags. I even heard one story about a girl having her purse stolen from underneath her head while she slept. And that’s one unfortunate byproduct of Envision’s growth: it’s a tourist trap.

The festival’s attendance demographic is only about 25% Tico (Costa Rican), and people are traveling to the small town of Uvita from all over the world. The town has a population scarcely over 1,000, and as such, the massive boost in visitors during Envision has caught serious attention, and unfortunately, it’s become open season for thieves and scammers. I heard too many tales of ransacked campsites, unattended bags, and AirBnB scams leaving people with absolutely nothing, causing bigger problems than simply surviving a festival in the jungle. So it’s a sad fact that Envision’s growth is double-edged.

Envision has made strides to positively impact the community in every way. 2016 marked the opening of Casa Envision, a youth center in Uvita made possible by the festival, and in previous years the organizers have donated funds to various projects and causes in the surrounding community. However, despite the economic growth found during the weeks surrounding Envision, not everyone is convinced of it being a good idea.

Conservative parties blame Envision for bringing drugs to the area, and they organized a protest to voice their concerns outside the festival’s gates. That same conservative mentality frowns upon nudity, and the abundance of topless women walking around the grounds caused further upset with locals. Now, like many others, I have zero issue with nudity, especially when it comes to simply not wearing a shirt, and there’s certainly something to be said about respecting the local mentality. But once inside a private venue, this shouldn’t be an issue, and the festival should be home to an independently curated environment – which Envision does beautifully.