Several days ago, hundreds of Spotify users’ accounts were breached, spilling their personal details onto a website called Pastebin. Many of their email addresses, passwords, account types and dates of account renewal were included in the leak, causing some users to have their accounts changed or used without their consent by outside parties. 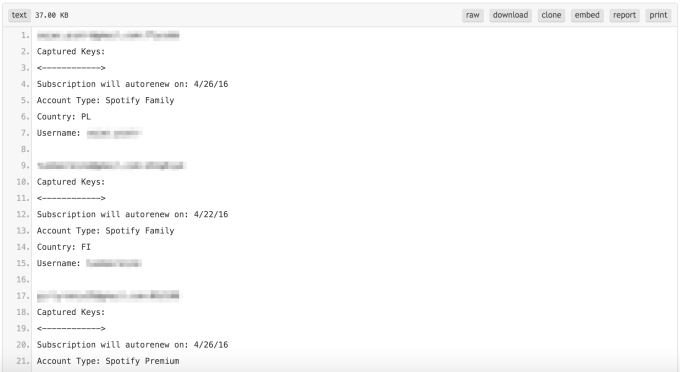 Despite the breach, Spotify has claimed that it has “not been hacked” and that its “user records are secure,” reports TechCrunch.

“Spotify has not been hacked and our user records are secure. We monitor Pastebin and other sites regularly. When we find Spotify credentials, we first verify that they are authentic, and if they are, we immediately notify affected users to change their passwords.” – Spotify spokesperson

During reporting, TechCrunch attempted to use several of the accounts to log in. According to their findings, only one actually permitted entry, implying that the breach may have occurred longer ago than first assumed. According to their conversations with several affected users, Spotify did not reach out about the incident, but instead forced them to contact the customer service line themselves to begin resolving the matter.

Because of the streaming service’s delay in resetting passwords and further protecting their information, many users are still experiencing issues relating to their accounts. In addition, because of many people’s tendency to share passwords across multiple platforms, reports have been made that detail hackers gaining access to some users’ Skype, Facebook, Uber or even bank accounts.

This incident follows a very similar narrative to the last time Spotify had its user information breached. So far, the site has not output an official statement regarding the current matter.