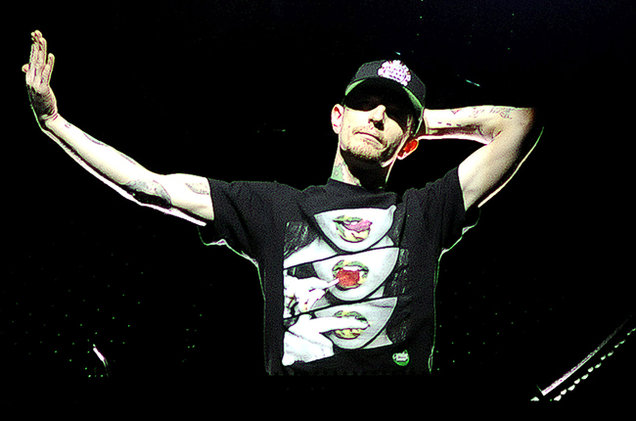 Deadmau5 and Steve Duda unveiled the third installment of their Razer-hosted video production series on Tuesday, following tutorials on melodic structuring and mastering/routing. Unlike the previous two videos, however, virtually no time was spent looking at the two’s computer or discussing specific aspects of music production during yesterday’s clip. Instead, Deadmau5 took the reigns with a crescendoing rant about the EDM industry and his role as its now-bitter poster child.

The two began by talking about the concept of creating music late into the night. Deadmau5 said that most of his greatest work was conceived around 4 a.m.. Duda described the mental tunnel vision that occurs at such an hour and said that the brain performs less analyzation when sleep-deprived, making the creative possibilities far less limited.

Next, Deadmau5 admitted his inability to work effectively under a strict deadline. Unlike film score composers like Hans Zimmer, he said, the pressure that he needs to complete a track must come from himself rather than an outside time restraint.

Both he and Duda then harkened back to their earlier days, when Deadmau5 remembered creating IDM music and other guitar and vocal-centered tracks together. He stressed the importance of experimentation and stepping away from EDM for an hour a day.

“It’s good to put EDM to the f**kin’ curb for like an hour a day if you can and just try and do some wack sh*t under the guise of ‘no one’s gonna listen to it.'”

He said that when everyone’s out of the house and the live stream is off, he’ll often make strange creations that wouldn’t otherwise be categorized by genre or style. It acts as almost a therapeutic process, he said, and one that allows him to add to his bank of ideas which he can later come back to for inspiration. In this way, he said, he can be a sort of “Mr. Potato Head EDM.”

This is where the conversation began to break down. Deadmau5 dove into a several-minute rant about the EDM industry, acknowledging the bitter person it’s made him become.

“The more I realize how f**kin’ stupid dance music is, the more it just makes me more and more f**kin’ mad. And it makes me more pissed off that I’m the f**kin’ poster child for this sh*t.

“I used to be alright, I used to be okay, like, I used to be cool with it, I used to be into this and that, but now there’s just so much of it that it’s literally turning me into a really bitter person and a f**king huge dickhead to other f**king dudes who want to f**king do it or who are just starting.

“Not like kids, not like guys who are interested and genuinely want to try it. I’ll go and help those kids out. I mean like f**king Kygo and Martin Garrix. They get to that thing and then all of a sudden they’re like, ‘oh yeah, this is what I do.’ I am done, I cannot.”

Watch the full video below.